The year 1973 was a defining period for this group of men.

Back then they were just a rag-tag collection of Moree High School lads ranging in ages from 15 to 18, thrown together for a few games of footie.

They dreamt big, and those dreams were realised when they marched – sorry, stampeded – through the University Shield knock-out competition undefeated.

Captained by Terry Quinn – now the CEO of NSW Country Rugby League – and coached by John McLean, this group of teenagers formed lifelong friendships that have realised at least three official reunions in recent years. And, back in 1973, they united a town as their quest for schoolboy rugby league’s most cherished trophy became a reality.

The squad, made up of names that would later become etched in local and State sporting history, faced a task of herculean proportions.

It is 45 years since that momentous 80 minutes of football placed Moree High School at the top of schoolboy rugby league’s food chain, and former team-mate Mike Hadfield says having a team reunion that coincides with Moree Boars’ centenary celebrations on July 21 was a ‘no-brainer’.

“The 45-year reunion had originally been scheduled for August 18, the exact date of our win at Grahame Park in Gosford,” Hadfield said.

“However, when news of the 100-year celebrations was announced it was agreed that the date be changed as most of the players had played with the Boars.

“While the main event for the weekend will be the celebration of 100 years of rugby league in Moree, the 1973 Uni Shield-winning team see it as a great opportunity to celebrate their victory, some 45 years after the event, and to also experience with many more mates the great years of playing rugby league with the Moree Boars,” Hadfield said.

Moree High was one of 184 schools vying for 1973 University Shield honours and the team was meeting opponents in a competition that is built on history, and acknowledged as the initial springboard to rugby league greatness.

But against overwhelming odds, Moree High took on all-comers and soundly defeated them. 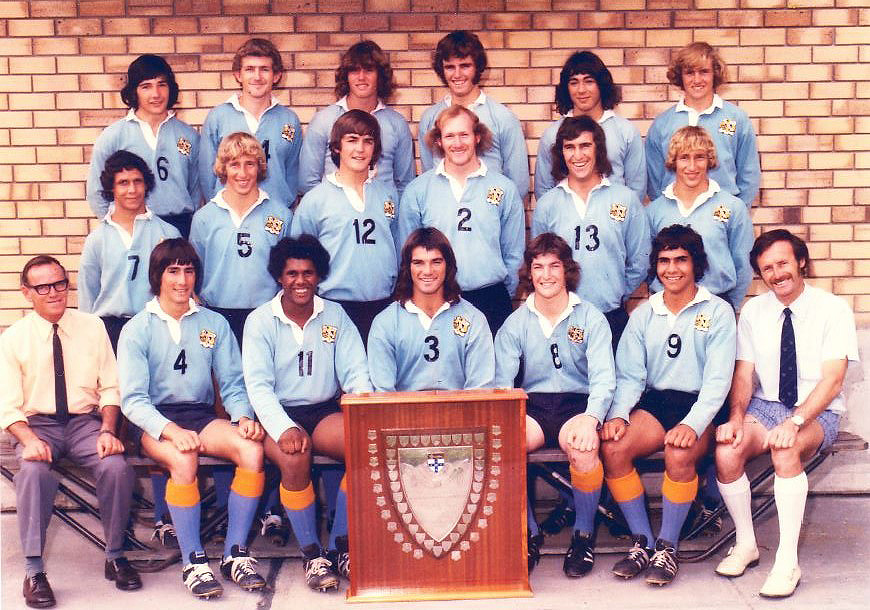 The players’ entry into sporting folklore began at Taylor Oval in early 1973 and was completed six memorable months later at Gosford.

Saturday, August 18, 1973 was truly the day of the underdog, and a defining moment in Moree’s sporting and civic pride.

“Team members and partners will once again gather to reminisce about a time in their lives that may never be surpassed,” Hadfield said.

The reunion of lifelong friends will be marked by a lunch at the Moree RSL Club at 1pm on Saturday, July 21.

This will be followed by what is expected to be a huge gathering of fellow rugby league stalwarts and friends from younger, and not-so-younger, days at the club prior to the Moree Boars’ Centenary Ball at the town hall, starting at 6.30pm.

The 45-year reunion of the University Shield team will also commemorate the loss of two team-mates in recent years.

“We have lost two of our members, John ‘Greasy’ Brazier and Bernie ‘9’ Briggs, and it is hoped that members of their families will join the Uni Shield family to respect and honour the contribution that Greasy and 9 made to Moree’s rugby league history,” Hadfield said.

Team coach, John McLean, said in an interview shortly after Briggs’ passing that the Uni Shield boys had become family, and were still a close-knit group.

“As the rest of us age a little more, it is to be expected that each of us will have our day but, in the meantime, we should share the many unforgettable moments and appreciate what each person has had to offer.”

McLean said that winning the 1973 University Shield grand-final was indeed a special, and important, moment in sporting history, and that it was due in part to the incredible backing and support of a small, close-knit rural town in north-western NSW – Moree.

IT is not often that Alf Scott is lost for words. But that is exactly what happened when the Moree born-and-bred living treasure was given not one, but two standing ovations at the Moree Boars Rugby League Football Club Centenary Ball. It was due recognition of Alf’s years of tireless dedication to the greatest game of all.

THEY were yelled at and heckled, and told countless times to get their eyes tested.

And if Specsavers had been around 35-odd years ago, that catchphrase would’ve been used frequently.

Tommy ‘Killer’ Cain and Reg Jamieson still chuckle when they recollect their refereeing days on rugby league paddocks across the far north-west and beyond – the memories and laughs, they reckon, are just too precious to forget.

FINALLY REVEALED: How Bernie Briggs kicked that goal to seal the 1973 Uni Shield for Moree

SADLY, Bernie Briggs and Terry Kelly – the latter also known as ‘Super’ Kelly – are no longer with us, but their legend lives on.

Now it can finally be revealed how Bernie Briggs kicked that goal from the sideline to seal victory for Moree High School in the 1973 University Shield grand-final – and how Super played a leading hand.

THE mighty Moree Boars celebrated 100 years of local rugby league at the weekend with a huge centenary ball at the Memorial Hall.

The ball featured guest speakers Tony Butterfield and David ‘Cement’ Gillespie as well as a charity auction hosted by David Watts that raised thousands of dollars.

WHEN former Northern Daily Leader sports editor Geoff Newling was approached and asked to send through his recollections of Moree Boars’ 1988 grand-final win against Gunnedah, he had several hundred words emailed back to Moree Online NEWS within a few hours – despite pressing freelance commitments and deadlines.

That’s the sort of bloke he is, and when it comes to penning words about rugby league, or any other sport, there is none finer than Geoff Newling.

Click link to read part one of the feature on local rugby league legend Alf Scott: