Of drought and flooding rains: a history of Moree’s big rain events down through the years

When arguments and debates arise about 21st century climate change, it seems nothing much has changed at all during the past 200 years – not across the Moree black-soil plains, anyway.

The devastating drought of 2018 and 2019, which affected most of eastern Australia, is regarded the worst in Australia’s history and Moree’s flood in 2012 was compared to the torrential downpours that flooded the vast north and north-west in 1910 and 1955.

Ever since the Gwydir district was first settled in the early- to mid-1850s floods and drought and severe weather events have beset farmers, villagers and townsfolk.

When the district was first settled, pioneers would anxiously peer skyward and wonder what the next year would bring.

As each decade rolled in to the next, resilient settlers simply coped, braced themselves, and got on with life, farming and feeding the nation.

The only “climate change” to speak of was perhaps the odd utterance between neighbours: “Looks like there’s a change coming”.

The township of Moree had only just been settled when, in 1864, the flooding rains came.

James Munro at Weebollabolla Station, at the time owned by the Hall brothers, wrote to his son afterwards, describing the flood.

“I was in charge of Weebollabolla then, Mr Connolly, the manager, being down in Sydney at the time,” James penned.

“The only dwelling house on the station was an old one, the flooring consisting of hand-dressed slabs which had been pegged with wood to the joists, no nails being used, so that when the flood water entered the building, the whole of the flooring rose up, and commenced bumping against the walls of the house, and would soon have knocked the place down had we not taken some of the slabs out and steered the flooring out of the house.”

There were 14 men, women and children flood-bound at Weebollabolla, and their only option as the water continued to rise was to scramble to the top of the building.

The women and children found refuge in the roof cavity, while the men clambered to the rooftop.

“There we remained for two days and two nights, the old house quivering like an ashen leaf to such an extent that we all expected it to go into the river at any minute,” James wrote.

In desperation, the men “moored” the house to stop it being washed away.

“We had some long greenhide ropes with which we helped to support the building by tying them to strong horse rails in front of the house,” James said. 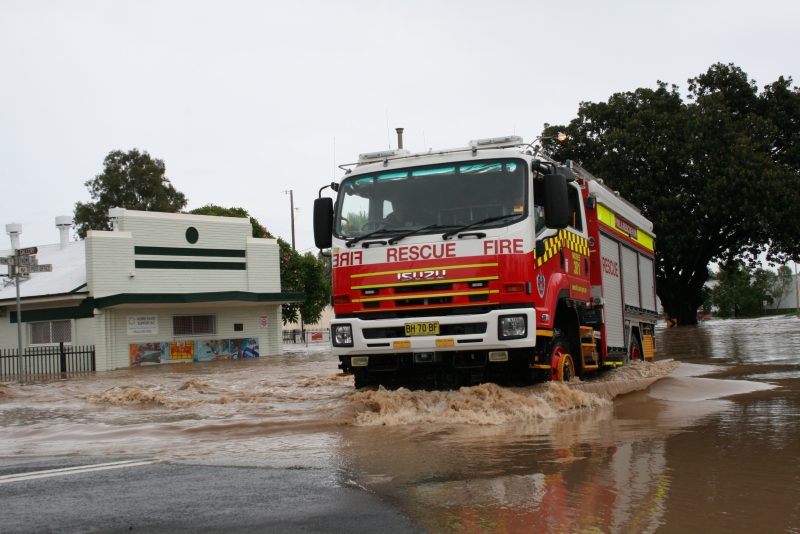 Moree’s main bridge at the height of the 2012 February flood (Image: Bill Poulos).

In Bingara the Gwydir River reached 70 feet above its normal level with Freeman’s Journal reporting: “At Molroy and Cooringra Stations the proprietors with difficulty saved their families. Everything in the shape of property was swept away, the damaged buildings alone remain.

The club received a big list of nominations, with the Maitland Mercury and Hunter River General Advertiser’s correspondent reporting: “I’ve never had the pleasure of being present at a meeting in that faraway place, but I am told the course is as level as a billiard table, and the arrangements and general conduct of the sport are first-class.”

The meeting was completed under bizarre circumstances – and the track rating “heavy” took on a whole new meaning.

By mid-afternoon on the second day the Mehi River adjacent to the Greenbah racecourse rose rapidly and submerged part of the track, which forced runners in the Moree Handicap to gallop through 200 yards of water, at times breast high.

One runner came to grief; his rider suffered a lacerated scalp.

The distances of all races after the running of the water-logged Moree Handicap, won by Blue Bell, were reduced to six furlongs.

When heavy rain began falling across the north and north-west on Tuesday, January 11, 1910, farming folk smiled.

When it was still pouring four days later, smiles turned to desperate frowns.

Charles Boughton noted in the North West Champion: “Local residents expected a big flood after the protracted downpour they had experienced, but it is said that not even the most confirmed pessimist expected such a catastrophe as actually occurred.”

Early on Saturday morning, January 15, 1910, it was reported three feet of water was over the bridge at Gravesend.

Telegraph wires were reportedly under water and all wire communication with Warialda was broken.

Many Moree locals doubted the veracity of the report but they unanimously agreed the town would be flood-bound by nightfall.

At Mungie Bundie, one family clambered atop a haystack to escape floodwaters.

Police constables Ford and Campbell were despatched by train to Mia Mia, and then by boat, to render assistance however the torrents were too strong.

“It was not long before the boat had been caught in a tree and overturned. The two constables were thrown into the water and after being washed down stream about a quarter of a mile, managed to scramble out of the current and reach Mungie Bundie, where they found the residents unharmed,” penned Boughton.

Seven children were rescued from the property Richmond by Constable Ford, who was assisted by Lieutenant White and Corporal McDonald from the Inverell Light Horse Troop.

Water travelled quickly down the Gwydir and by midday on Monday, January 17, traffic between north and south Moree was suspended, with north Moree completely under water.

The Scone Advocate reported: “A disastrous flood swept over Moree on Monday, commencing with the breaking of the Mehi River over its banks in several places simultaneously at 9.30am, caused by the waters meeting tee water of the Big River (Gwydir), which had overflown the previous evening. “These waters were backed up by flood waters from Bundarra and Bingara, and in a short space of time the water had swept over the northern parts of the town, submerging them to a depth of some six feet in about three hours.”

Floodwaters continued to rise until nightfall and it was reported there was an unbroken expanse of water from Moree railway station to Carole Creek, seven miles away.

More than 250 residents scrambled to the station, where they spent two nights and a day camped on the platform.

“But the centre of town and a large section of East Moree were still under water. As the rivers gradually returned to normal, the people faced a colossal task, for many houses were wrecked and furniture ruined, while over everything was a deep layer of mud,” Boughton recorded.

Several people drowned during the 1910 disaster.

When the floodwaters receded, the body of 31-year-old John Butler Yeomans from Yagobie was found in Barber’s Lagoon.

It is believed he was struck by a log when attempting to swim against a torrent of water after clinging to a table.

John Reynolds drowned while attempting to cross a swollen gully and James Stone, manager of Keytah Station, west of Moree, was washed away when desperately trying to save sheep.

Tragically, four drowning deaths also occurred at Wee Waa and one each at Gunnedah, Tamworth and Warialda during the 1910 flood.

At Wee Waa, a boatload of men, women and children attempted to cross a swollen lagoon to reach the township and safety.

However, a torrent of water washed the boat against a tree, smashing it to pieces.

Broughton Carter, whose father owned the property Numby-Numby about 60 miles west of Moree, recalled in Moree and District Historical Society’s Yilaalu No.20: “Billy Mace had a mob of wethers agisting on the property and, owing to the high flood they were marooned on higher ground with no feed.

“A corn feed depot was organised at Garah and Jerry Pentland, a barnstorming air pilot with an open two-seater single engine, two-wing plane was engaged to fly from Garah to Numby-Numby with two bags of corn each trip and bring back two sheep each time.”

In 1931 locals were given a similar scare when the Gwydir River at Gravesend peaked at 44 feet.

Moree was spared, however the Gwydir River broke its banks at Boolooroo and water spread across low-lying ground to the north.

Moree, however, escaped serious damage, with minor flooding in the low-lying areas of north Moree.

Patients at Fairview Hospital in Moree were evacuated when floodwaters peaked on Wednesday, January 23, 1946.

However, by Friday, January 25, water levels had dropped.

“Many of the residents who were evacuated from their homes during the flood peak have returned and are engaged in removing the debris and litter which was left behind by the flood,” the newspaper reported.

“Although the Mehi and Gwydir Rivers are still running swiftly and abnormally high, they are well within their banks.”

The 1950 flood, comparable to the 1910 disaster, resulted in heavy stock losses across the north and north-west.

325 homes in Moree were flooded.

About 600 miles of fencing and 1450 acres of crops were washed away.

In late February, 1955, as Moree residents braced for severe flooding, at least 25 people across New South Wales died and dozens more were missing or injured when the worst floods in New South Wales’ short history drenched thousands of square miles.

Most of Moree’s central business district and about 800 homes were flooded when the Gwydir River peaked at just over 35-and-a-half feet.

In February, 1971, more than 400 people were evacuated from the district when a major flood affected Moree.

River heights peaked at nearly 34 feet and the township was isolated for two weeks.

In the first week of January, 1974, major flooding occurred across much of New South Wales.

At Collarenebri, 18 inches of rain fell in four days and Moree was surrounded by a vast body of water stretching 100 miles east and west and 200 miles north and south.

Moree, Narrabri, Gunnedah, Quirindi and the rail junction at Werris Creek were isolated when rail and road networks were submerged and at the peak of the flood, more than one-third of New South Wales was affected.

In February, 1976, nearly three-quarters of the buildings in north Moree either had floodwater surrounding them or in them – including the central business district – when river levels reached nearly 35 feet.

In late November, 2011, Moree was saturated with nine inches of rain in 72 hours, causing major flooding in parts of the town.

More than 300 properties were isolated and the town was cut in two when river heights swelled to 33-and-a-half feet.

The flood was later labelled a “training run” by Moree mayor Katrina Humphries, given the devastation caused by flooding two short months later.

After nearly eight inches of rain tumbled down in 72 hours, the flood peaked just above the 1976 event and fractionally lower than 1955, which is still regarded the worst the town has experienced.

It was the second-highest flood event recorded in Moree – the worst since 1955.

Residents in north Moree and those living at Yarraman, Gwydirfield, Bendygleet, Pallamallawa and Biniguy, totalling more than 2200 inhabitants, were ordered to evacuate their homes.

Helicopters were used to airlift 600 trapped Pallamallawa residents to safety.

On Tuesday, February 7, as floodwaters receded and Moree residents began mopping up the mess for the second time in eight weeks, Governor-General Quentin Bryce and her husband Michael inspected flood damage to local properties and infrastructure.

Along with Moree mayor Katrina Humphries, the Governor-General and her husband met with residents, volunteers and community service providers at the Moree Recovery Centre.

Now, it seems, Moree is bracing for another flood that is freely being tipped as potentially on par with 2012.

Websites you need to know:

For more information on how to prepare for storms and floods, visit www.ses.nsw.gov.au

For information on weather warnings and the latest forecasts, visit www.bom.gov.au