A BLEND of community spirit and home-grown kindness and goodwill rose above the devastating floodwaters that swept through Moree and district late last week.

Within hours of the water subsiding, volunteer work crews from several businesses and community groups were on the streets helping flood-affected residents mop up, move furniture and clear debris.

Volunteers from the State Emergency Service and Rural Fire Service were joined by employees of Graincorp Moree, DD’s Engineering and Trans4m Rail, in town to oversee the Narrabri to North Star Inland Rail project. 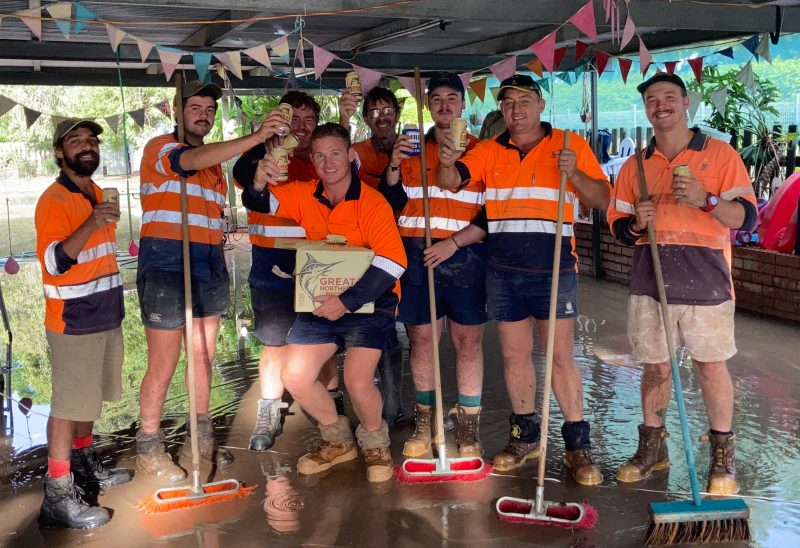 When the call went out on social media to help an elderly couple in Iris Street move and lift whitegoods, Graincorp area manager Mick Grant and his men were on-site within minutes.

“We’re only too happy to help; we love this little town,” Mr Grant said.

Julie Denyer, who lives in Lucksall Street, said she was “plodding along” the best she could when Mr Grant and his men arrived.

“I couldn’t do much as I still had ankle-deep water all in my yard and carport,” Ms Denyer said.

“A friend tagged me in a post on Facebook. Mick saw it and sent me a message. They came with a pump and pumped the water out so that I could get in and clean it properly over the weekend.

“These blokes are nothing short of champions,” she smiled.

“Despite their personal situations, Donald and his staff were out early Friday morning with equipment, helping affected north-side residents clean up the mess,” Mrs Sharp said.

“I know many of them had their own mess to worry about and clean up, and some had water in their homes, so it was truly a kind gesture.”

The main shopping and business precinct – Balo, Heber, Frome and Auburn Streets – were scrubbed clean and fully operational by the weekend.

“We had a few big days in front of us, but we got through it,” council ganger Mick Girard said.

As scores of workmen and women – and just as many volunteers – helped residents get back to a semblance of normality, eight-year-old Moree cub Lucas Bennett was breaking hearts and raising smiles as he trekked door-to-door, handing out bunches of fresh flowers, kindly donated by Coles Supermarket Moree. 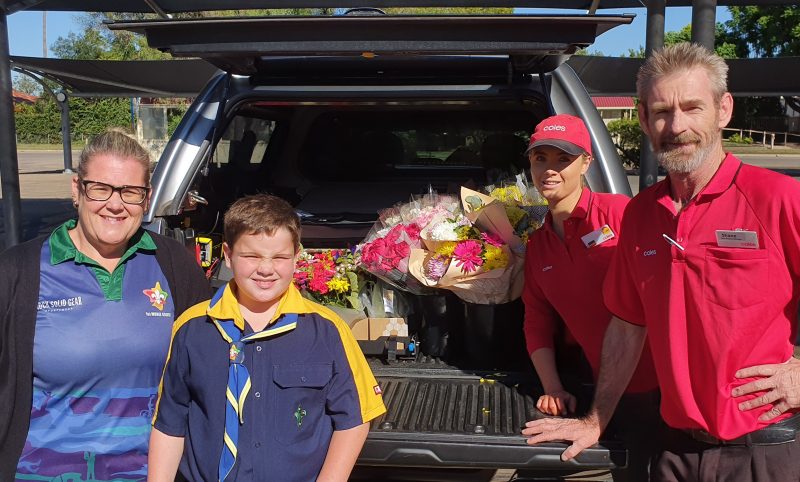 Dad Nathan Bennett said Lucas lived up to his Scout promise to be respectful and help others.

“As parents we are extremely proud of the empathy and concern Lucas expressed when delivering flowers,” Mr Bennet said.

“Lucas hugged those overcome by emotion, shook the hands of gentlemen hosing away layers of mud, and made a point of asking if everyone was OK, and listened to their heartfelt stories.”

Woolworths Moree kept the Rural Fire Service and other vital services and organisations quenched with a steady supply of cold drinks and bottled water and Coles hosted a free sausage sizzle on Sunday – goodwill gestures that did not go unnoticed by Moree mayor Katrina Humphries.

“Both supermarkets in Moree are incredibly generous and Kylie Heffernan, the store manager at Woolies, is an absolute gem,” she said.

“Our unity in times of disaster and sadness is legendary; the spirit of the black-soil plains soars above us and gives us the energy to put one foot in front of the other,” she said.

“Our rural folk are suffering very much. Massive help is needed to restore fence-lines and get fodder out to them – all our aid needs to run in parallel.

“Thank-you to the brave souls that came to help us – the chopper pilots, the delivery truck drivers, the volunteers, our neighbours, our elected representatives Adam Marshall and Mark Coulton, and all the people who we don’t even know but have sent good wishes, prayers and resources,” she said. 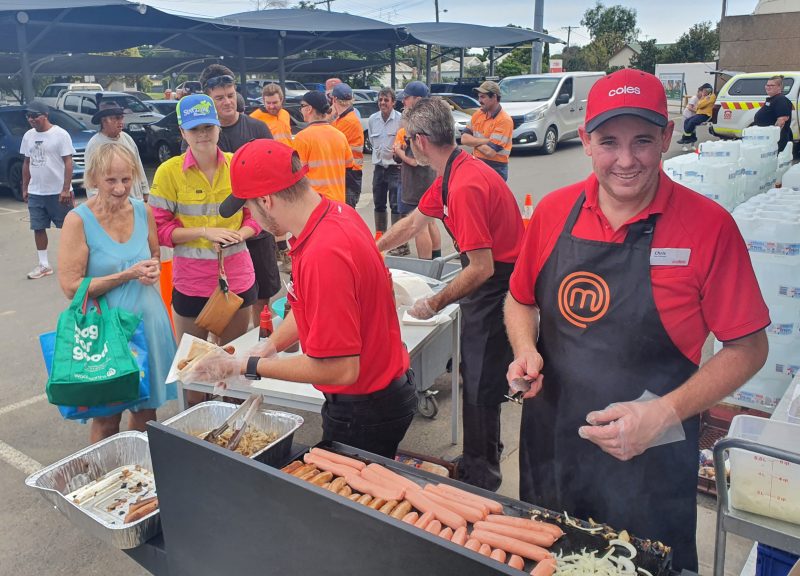 Cr Humphries said Pallamallawa contractor Tony Hyles, and Jason and Tammy Elbourne on the Terry Hie Hie Road, went above and beyond, relaying weather updates and up-to-the-minute river levels, as it became clear major flooding across the district was imminent.

“Tony Hyles should be knighted – he saved our arses again,” Cr Humphries said.

“Tony, and Jason and Tammy, literally put their lives on the line multiple times to go out in their paddocks and trudge through mud and dangerous ground to give us the information that hundreds of millions of dollars’ worth of weather-watching equipment could not give us – local knowledge.

“The simple fact is that three sets of eyes and this knowledge gave me the information I trusted and needed – at all times of the day and night – to relay to our community and have the community prepared.

“I can’t thank these people enough,” she said.

“These boys did a fantastic job relaying all the vital information listeners needed to hear. They actually camped in the 2VM building for a couple of days, keeping everyone informed,” she said.

Member for Northern Tablelands Adam Marshall said acts of kindness in times of need were what living in the bush was all about.

“It is typical of the community spirit and practical ‘can-do’ attitude Moree is renowned for, and typifies what living in the bush is all about – when someone’s in trouble, everyone rallies around to help out,” Mr Marshall said. 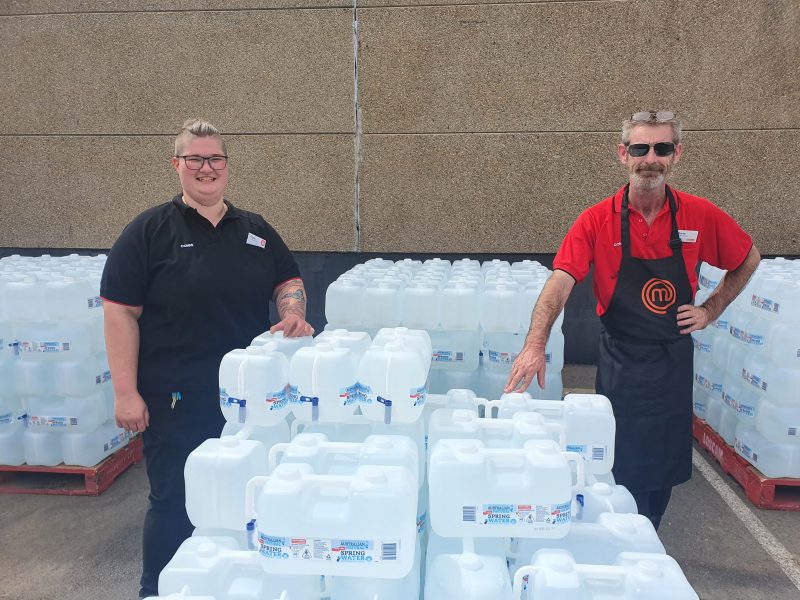 “For us, it was probably similar to 2012. Some areas on the place got more water than the last flood, but I also saw water going to places where I’ve never seen it go before,” he said.

“We got a fair bit of erosion, as well as stubble clumps washing over the roads. There was also a bit of fence damage but, surprisingly, some areas held up reasonably well.

“At this stage, thankfully we’ve had no stock losses. If we can get our crop in and get it established, we’ll be in good stead for a pretty good winter.

“Hopefully, we might get the cost of repairs back at the end of the year,” Mr Reardon said.

Water levels in Moree itself were below levels recorded in 2012, regarded the worst to hit the district since 1955.

Dr Geoffrey Hunter Bridge, the main link between north and south Moree was closed Wednesday night and most of Thursday before being opened to restricted traffic late Thursday.

The Barwon River at Mungindi, north of Moree, is expected to peak at 7.20 metres this week.

“We must push forward and find plenty of smiles. These often come through kind words, generous actions and the fact the sun rises in the east every morning – hug someone today, or at least reach out and squeeze their hand and let them know you care,” she said. 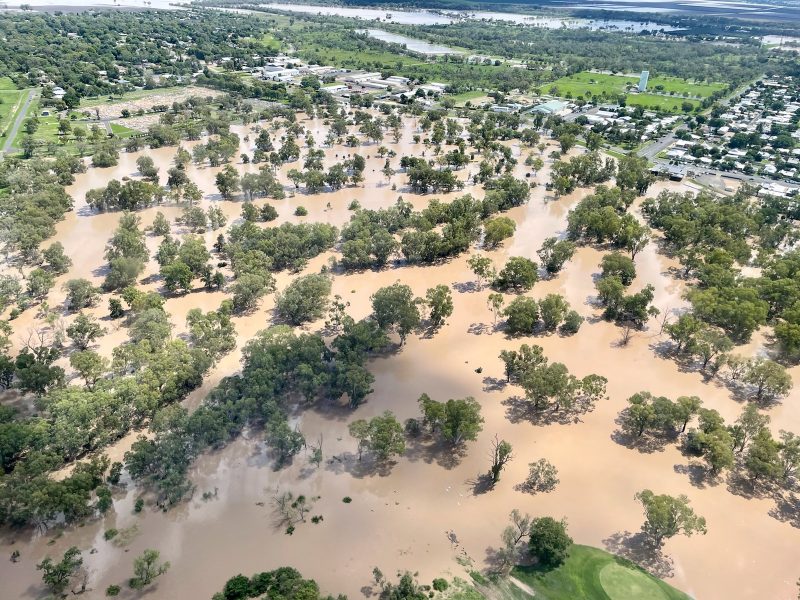 Next post
Love & Lace, Long Ago a big hit!