IN A Wink was a real down to earth trier and would have been right at home at a Tradies’ day such as today’s eight-race meeting at Tamworth.

Indeed, the now-retired mare ran well at Tamworth, winning on debut at the track and also running a huge third in a Tamworth Cup.

Now retired, the mare was always ‘something special’ for owner-breeders Gwen and Errol Leicht when she was foaled in the spring of 2011.

She is now off to the breeding barn and another chapter in what has been an outstanding career which has yielded five wins, eight placings and $230,000 in prizemoney.

A daughter of local stallion Ready As, the bay filly from local mare, Time Release, who had been trained by the late and legendary Merv Corliss, was in Errol Leicht’s opinion “always destined for a good career on the track”.

“She spent her early days with Quirindi horseman and breaker, Peter Mills, and he also had an opinion of her,” Leicht said. 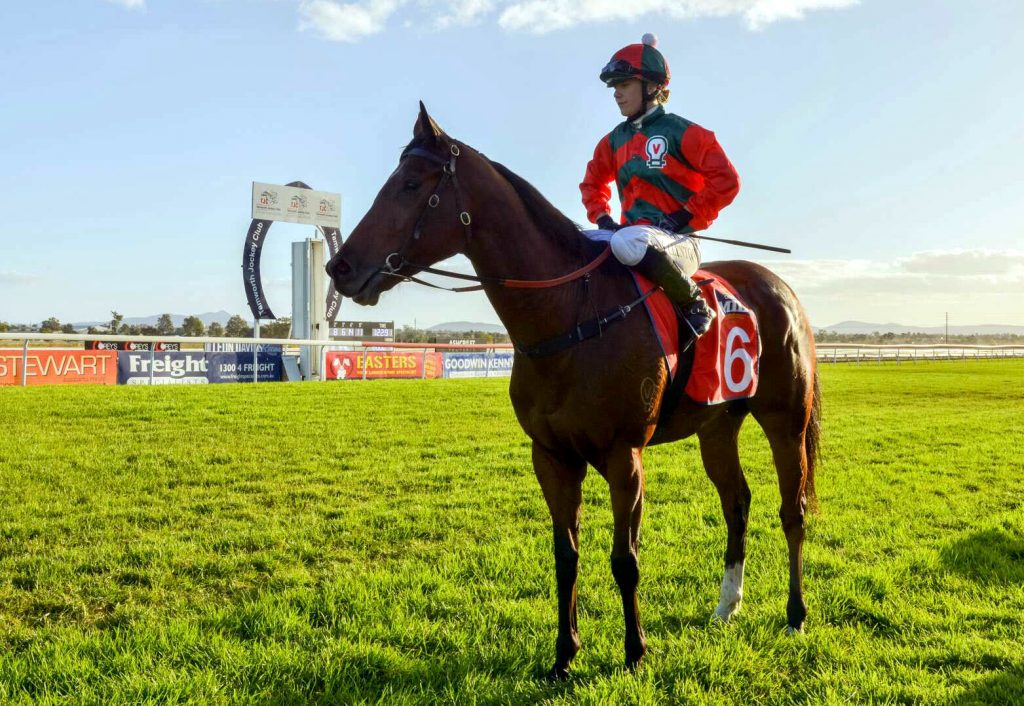 Top racemare In A Wink, seen here with Sammie Clenton up, has been retired from racing to start a new career in the breeding barn.

“She was sent to Scone trainer, Greg Bennett, for the start of her racing life.”

It began as a two-year-old, in an open trial at Tamworth on April 1, 2014, which she won. Two weeks later she was back at Tamworth to win her first official race start over 1000m. Ridden by Greg Bennett’s apprentice Kassie Furness she won in fine style and then went for a spell.

She returned to racing with a third over 1200m behind Dalpura and St Luke.

“Taree was also a good track for the mare, as she won twice there from her only two appearances over 1300m as a three-year-old and later on when she won the 2017 Gloucester Cup (1257m) carrying 60.5kgs in April 2017, which was her last win,” Leicht recalled.

“A win at Warwick Farm over 1400m and a gallant third in the first running of the Country Championship heats, at Tamworth behind Voodoo Lad and Tarangower was followed up by the greatest win for her career when she beat a very good field of three-year-old fillies in the Denise’s Joy Listed race in May 2015.

“She still is the class record holder for that race at Scone, and raced in the Metropolitan area during her next three preparations.”

The decision to retire the mare wasn’t an easy one for Gwen and Errol.

However, they are now looking to a half-sister by Sidestep to hopefully continue the tradition for “Leicht’s View”, when she takes her turn on the track in the near future.

Errol said final details are still to be organised for the mare in the Spring but there could just be another local star sporting the Lightbulb brand in the not-to-distant future.

Her most impressive win was her Denise’s Joy Listed win at Scone, Errol said.

He also reckons her narrow second to Trafalgar at Warwick Farm was also outstanding.

“She was beaten a nose by Trafalgar (Chris Waller and Hugh Bowman). She came from last on corner and just got beat on the line,” he said.

“She was also knocked over twice in the 2016 Tamworth Cup and still ran a great third to Chrysolaus and Pera Pera.

“She was very smart and a good looker, tenacious with a great will to succeed.”