MORE than 1000 mourners gathered in Moree on Friday to farewell local treasure Bernie Briggs, who succumbed to pancreatic cancer after a battle that raged for two-and-a-half years.

The living legend is now the legend, and family and friends travelled from across the country to say goodbye to the man who put his hometown on the map in 1973 when he helped Moree High School win the coveted University Shield grand-final against Forbes High School at Gosford’s Grahame Park.

Front-rower John Brooks had burst through the Forbes defence and planted the ball in the corner to bring Moree to within two points of victory and Bernie sealed the game by converting Brooks’ try.

He had 8000 sets of eyes on him as he prepared for what would become arguably the proudest moment of his sporting career. 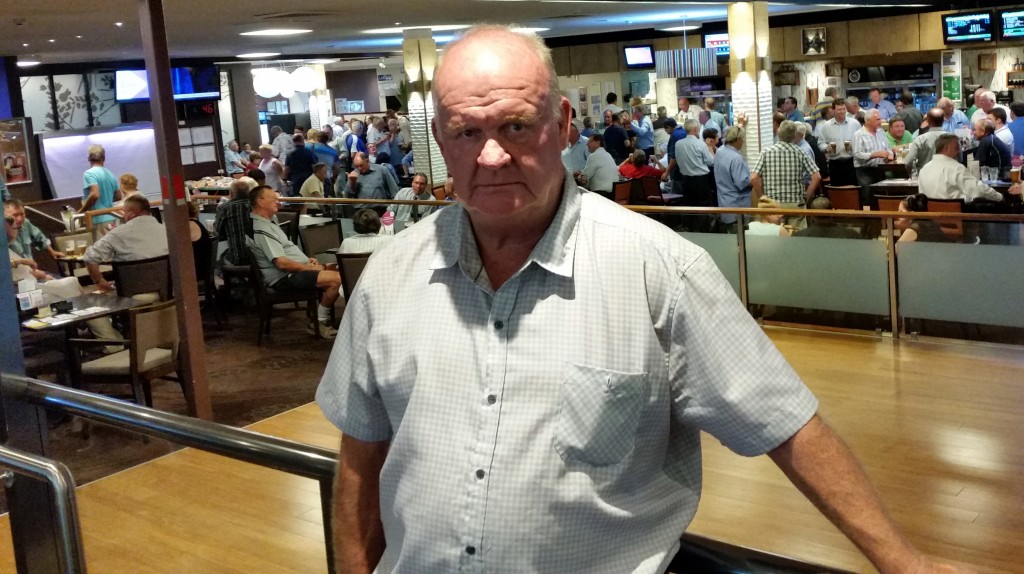 With the score 12-11 Forbes way, it was up to Bernie to bring the Shield home to Moree . . . from the sideline.

Silence hung in the air as that oval-shaped ball floated magically across the black dot and, just for a few moments, time was suspended.

Even coach John McLean stopped chewing ice – he was on his third bucket of the stuff when he sent Bernie in to do the near-impossible.

But nothing was impossible for this kid from Yarraman, who would grow up to be one of Moree’s most cherished citizens and one of the town’s most gifted, yet unassuming, athletes.

And on Friday people came from miles around to say farewell to a true gentleman, and to reminisce about that magical day at Grahame Park.

Bernie was just 15 years of age – the youngest player on the field – when he took Moree to a one-point lead over Forbes High School with 10 minutes of play remaining of that now-famous game of rugby league.

The roar from the huge crowd was deafening, but Bernie took it all in his stride.

He didn’t need to speak. That huge smile said it all.

Bernie had single-handedly – or footedly, if there is such a word – embedded the sports-mad town of Moree into rugby league folklore.

It is one game of footy that is still talked about today, more than 43 years later.

It’s talked about as if it was played just yesterday and, in later years, Bernie would often recall that moment – that few seconds suspended in time that completely rewrote Moree sporting history.

Bernie once said he felt “sheer elation” when the flags were raised and Moree took a 13-12 lead.

“But I remembered that we still had 10 minutes of football left and that the game wasn’t over – even though we got one point in front, the game wasn’t finished,” he said.

Funnily enough though, when that 10 minutes of play was over and the full-time siren rang through the air, no-one on the field heard it, so loud was the roar from the crowd.

This group of boys from Moree kept playing, unaware that the game was over and that they had marched Moree into rugby league history.

They just kept playing until they realised their opposition was congratulating them, not tackling them.

It was a special moment in time for a small bush town, and a huge moment in the young life of a  kid from Yarraman who would grow up to be a hardworking family man and a friend and mentor to so many people.

Bernie wore the No.9 jersey that day, and from that moment on he was often simply called “9”.

Stan Jurd recalled how he and Bernie began their sporting careers as arch-enemies before forming a friendship that would last a lifetime.

“Bernie was a very loyal, trustworthy person and a great friend,” Jurd said.

“We were arch-enemies for a couple of years – Bernie went to Moree Primary School and I went to St Phillies.

“Back then, junior league went on weights, not on age, and when we got to high school Bernie and I were a little tubby so were playing against blokes that were up to three years older than us,” he said.

“We ended up playing soccer for a year – Bernie excelled and I was very ordinary. But we became best of friends on the soccer team and best of friends when we played rugby league together.

“We were on the same team and Bernie handled the backs and I handled the forwards,” he said.

During the 1980s, Jurd played for North Sydney Bears and Parramatta Eels after starting his professional career with Queanbeyan Blues.

He was with the Eels when they took out the 1983 Sydney Grand-Final and also played in games two and three of the 1983 State of Origin.

Jurd has met many great people over the years, but says no-one compares to Bernie Briggs.

“Bernie is a genuinely nice bloke . . . there are not many of us left,” he smiled.

“But seriously, you just won’t find a better bloke than Bernie and even through all this, nothing could get him down. 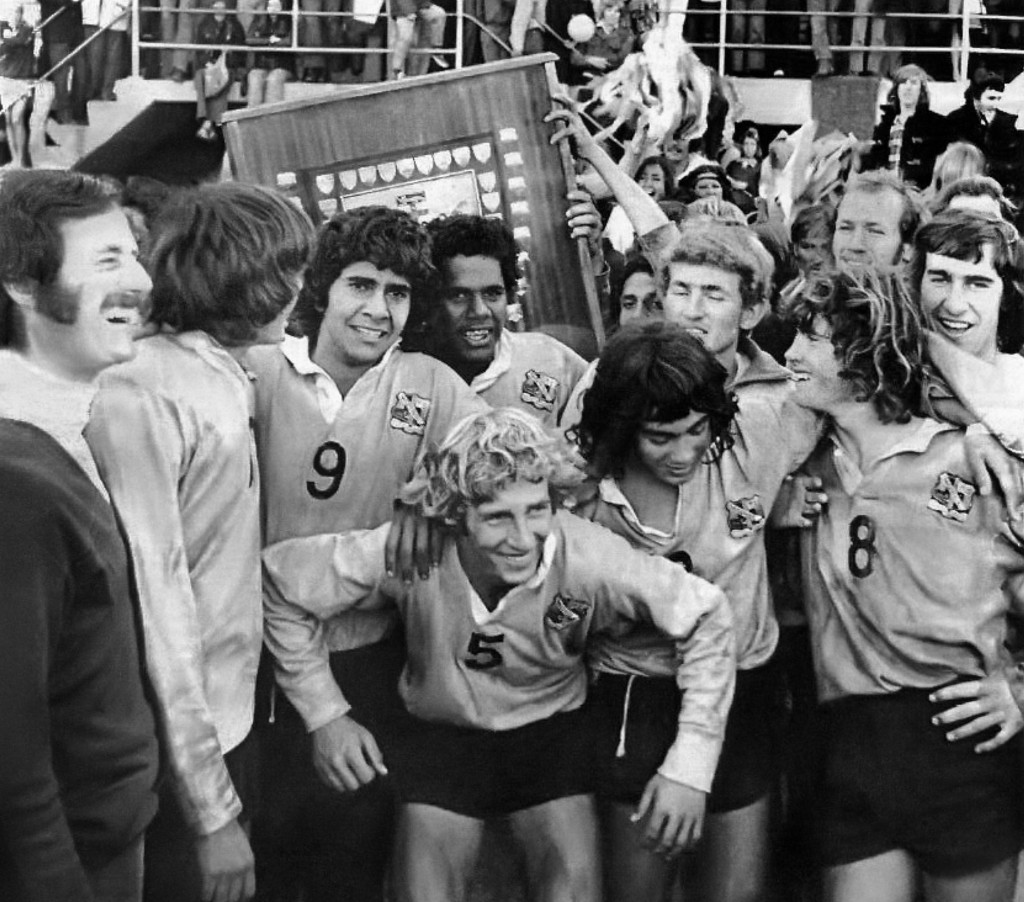 Bernie Briggs, aka “9”, and team-mates after winning the 1973 University Grand-Final.

Bernie Briggs was born on January 16, 1958 to parents Noel and Peggy.

It was the year the St George Dragons defeated Western Suburbs Magpies 20-9 in the NSW rugby league grand-final – but Bernie’s love for the Dragons is another story, suffice to say that he once scaled a ladder to paint a massive red “V” on the southern gable-end of his home in Moree.

Bernie grew up at Yarraman, a small village just 5km north-west of Moree, with his brothers Peter and Ian, and sisters Yvonne, Shirley and Barbara.

And he was good.

You have to remember that this was a time when the net was something you took fishing and a television set was a luxury, not a right.

Kids played football in winter and cricket in summer and there was very little time for anything else.

Bernie played his first game of competition cricket in 1969 when he was just 11 years of age.

The big boys from Yarraman were playing against Berrigal Creek at Yarraman Sports Ground but they were a man short.

One of the players, George Tooth, said he knew a kid that could make up the numbers and off he went.

George returned about half-an-hour later with this young Aboriginal kid who was immaculately dressed.

His hair was slicked back, his cricket “whites” were perfectly pressed and spotless, and he had just that hint of competition in his eyes.

Robert Jurd was there that day, and says he will never forget the moment.

“Bernie turned up ready to play. It was as if he had been sitting at home just waiting for the call-up. And after he’d sent a couple of balls down, we knew that the kid could play,” he said.

Bernie went on to play A-grade cricket for Moree and was a regular with the north-west area open cricket team.

During one memorable inter-town semi-final against Tamworth Bernie took eight wickets and then another five wickets in the grand-final a week or so later, again against Tamworth.

Good judges say that the bigger the contest, the better Bernie played – and they were spot on.

Even as early as 1975 he was offered a cricketing scholarship at a private school in Queensland but he preferred the black-soil plains of Moree and Yarraman.

Bernie was a freak at any sport and his often unsung achievements were incredible.

Just a snapshot of the sporting life of Bernie Briggs would take a full 80 minutes – and no doubt there would be a call for extra time.

After his playing days were over Bernie was a member of Boars on Tour, a group of broken-down old footballers that still have the time of their lives while raising much-needed money for Moree charities and vital services.

Bernie loved his racing and always made a day at the track something special, regardless of whether he won or lost.

The day the Boars On Tour-owned galloper Woods won at Moree was one to remember, especially when 20-odd broken down old footballers and their partners ambushed the Moree Race Club committee room looking for the free drink that the club offers all winning owners.

Bernie Briggs was a warm, passionate, humble human being, who loved his family dearly.

He would do anything for his beautiful wife Sally, his kids Brendan, Nathan, Stephen and Tamara, siblings Ian, Peter, Yvonne, Shirley and Barbara and his dad, Noel.

And, it seems, too many grandchildren were never enough for Bernie – at last count there were 14, with Junior Briggs on the way.

In July, 2014 the world irrevocably changed for Bernie Briggs.

He was diagnosed with pancreatic cancer and given just seven months to live.

He fought the typical Bernie Briggs fight, though, and gave it all he had.

What will be, will be, he often told his family.

Despite enduring the anguish and the suffering of a journey that was never going to have a happy ending, Bernie and Sally in 2015 were the faces of the New England and north-west Daffodil Day Local Heroes awareness campaign for Cancer Council NSW.

Their photo and stories were featured with in-print and online promotional material that helped raise awareness and much-needed funds for cancer research across the globe.

The gesture was typical of Bernie’s willingness to chip in and help others travelling a similar journey, despite the personal battle he was fighting.

He was 58 years of age and would have celebrated his 59th birthday on Monday, just gone.

He was at home with his family and it was peaceful, and now the pain and suffering is over.