THE GrainCorp silos at Yelarbon were named the Best Rural Art in the nation at the Australian Street Art Awards on the Sunshine Coast on Tuesday night.

As one of the biggest murals in Australia, When the Rain Comes, also received the bronze prize in the highly coveted ‘Best Mega Mural’ category.

The 96-metre-long silo artwork in Yelarbon impressed the judges.

“This mural is contributing significantly to making Australia a more vibrant, creative and interesting country – somewhere visitors will want to explore more keenly.”

The Australian Street Art Awards encourages Australians to explore the world-class street and public art that is safely accessible all year round and found in every corner of the country. With rigorous judging by tourism leaders from across Australia and abroad, plus second-tier auditing and due diligence, Yelarbon’s wins have the credence of the art tourism sector. 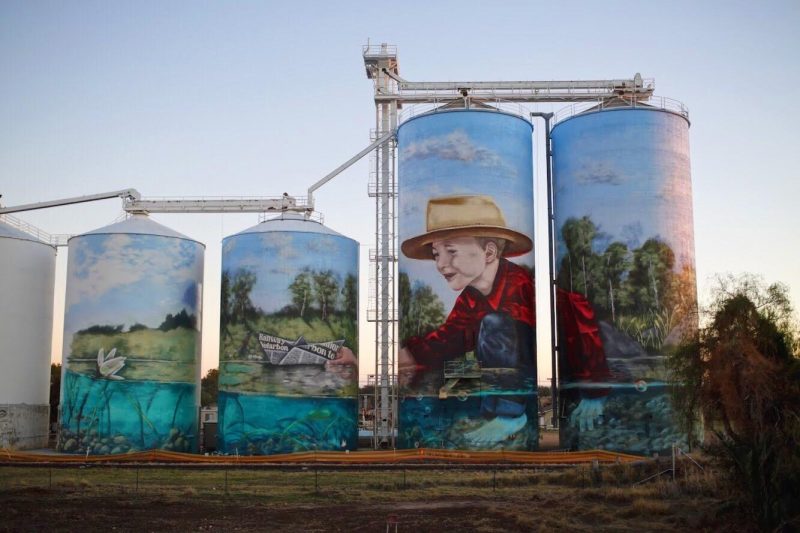 Mayor of the Goondiwindi region Lawrence Springborg said his own connection to Yelarbon made him especially proud of the town’s national recognition.

“I am very proud to have grown up here in Yelarbon, so to see the silos win not one but two awards and take the title of Best Rural Art in Australia really is an honour for our little town,” Cr Springborg said.

“I want to thank my fellow residents for their involvement and the steering committee for their efforts in turning a vision into reality.

“The win further cements the region’s reputation on the national silo art trail and proves that small country towns really do have lots to give on the national scale. The Goondiwindi region’s motto is that we are ‘Regional Australia at its best,’ and I think Yelarbon being named as the Best Rural Art in the country proves just that.”

The eight large GrainCorp silos together create the 1800-square-metre canvas for what has become one of the largest artworks in Australia.

The mural was painted by The Brightsiders and depicts Yelarbonʼs freshwater lagoon – an idyllic oasis dotted with water lilies where a child plays with paper sailing boats.

The judges were impressed with the mural’s details, and the way that Council utilised these to help promote other aspects of the region.

“Until these Awards were launched in 2019, though, there had never been a way of rewarding and supporting places like Yelarbon that created these art-related experiences for travellers. The Australian Street Art Awards remedied that shortcoming.”

“If you’ve not yet had a chance to experience the sheer scale of the Yelarbon silos, now is absolutely the time to visit the Goondiwindi region and see them for yourself,” he said.

Next post
Moree youth take the lead on community events