THE wilful destruction of three trees at Moree’s Anzac Centennial Park alongside the Moree bypass has infuriated Moree Plains Shire Council and action is being taken to catch the vandals.

Project and development manager Lila Fisher explained Council considers the tree damage to be a very serious matter and is vigorously pursuing the issue.

“The malicious damage has been reported to the Barwon Local Area Command, who are reviewing close circuit television (CCTV) footage,”  Ms Fisher said. 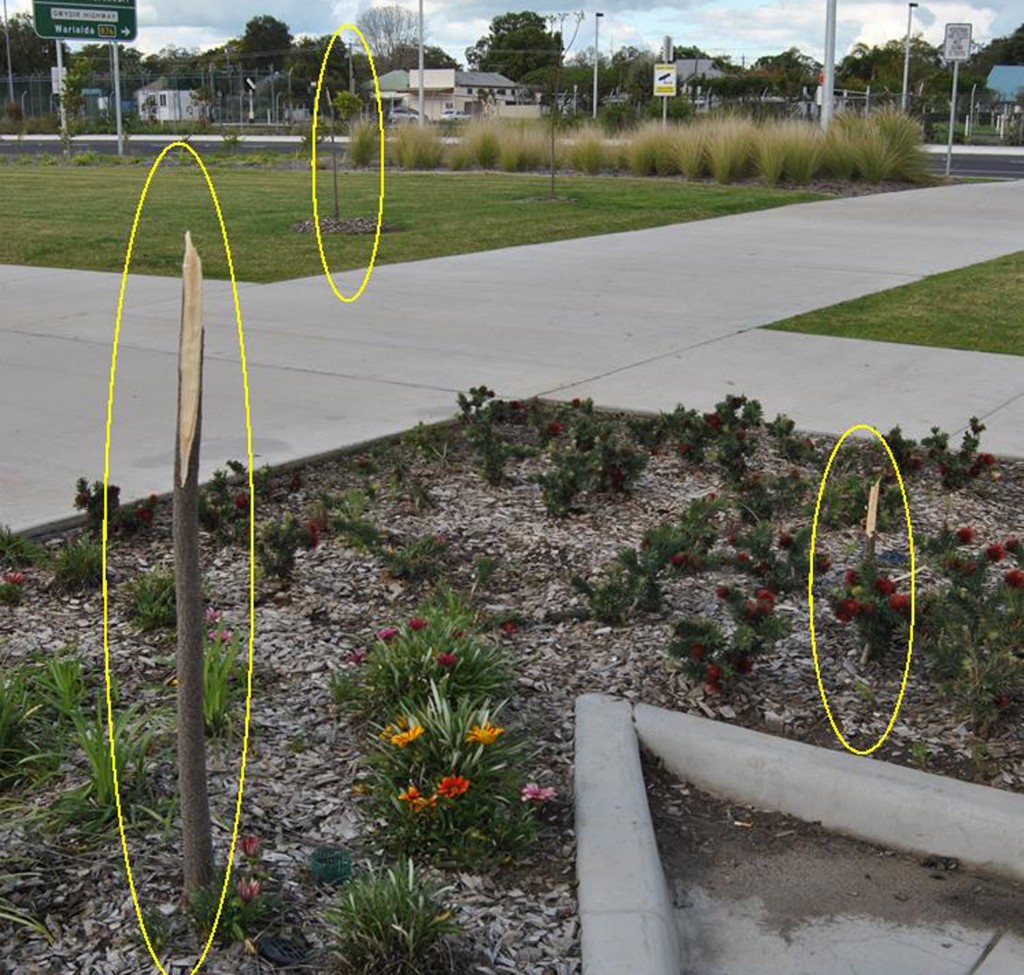 Three trees at Moree’s Anzac Centennial Park have been wilfully damaged with the matter now in the hands of Police.

“Every case of tree vandalism costs ratepayers. Depending on the severity of the case, the cost to the community can be up to $1000 for investigation, signage, replacement and remediation every time it happens,” she said.

Tree vandalism is defined as ‘the unlawful destruction, damage or injury to trees and vegetation on community and private land which includes poisoning, mowing, pruning, breaking limbs and branches, removal and ring-barking.

Meanwhile, Moree Plains Shire Council chief weeds officer Ian Schwartz said “Any contractor or landholder who operates machinery in Queensland must present their equipment at the NSW DPI border inspection sites to be cleared of parthenium before crossing into New South Wales.”

“Operators that presented at DPI border inspection sites with machinery in a clean condition will endure less time during the inspection process and crossing papers will be issued more quickly,” he said.

“Machinery booked in for inspections with 24 hours’ notice will also receive priority,” he said..

Failure to present equipment at border inspections sites or knowingly allowing contaminated machinery on NSW properties without appropriate papers could result in penalties.

As an example, Mr Schwartz said a southern Queensland harvesting contractor was fined for the illegal introduction of grain harvesting equipment from southern Queensland into northern NSW.  The contractor was subjected to an official investigation by Moree Plains Shire Officers working under the Noxious Weeds Act and was issued with a substantial fine.
In an attempt to stop the spread of parthenium, a Ministerial Order has been issued to expand Section 47A of the NSW Noxious Weeds Act 1993 to apply to all machinery or equipment entering NSW from all other Australian states and territories.

Any landholder who suspects they have found parthenium on their property should not attempt to control it themselves.

Parthenium is a Class 1 notifiable weed in NSW and must be reported to the NSW DPI Parthenium Hotline on 1800 680 244, or Moree Plains Noxious Weeds Officer on (02) 67657 3259 within 24 hours of detection. If confirmed, Council’s Weeds Officers and NSW DPI will carry out control work.

Mr Schwartz assures landholders that initial control costs of notified parthenium outbreaks are covered by a contingency fund allocated by the Minister for Primary Industry.  But he warns should landholders or farm managers knowingly allow contaminated machinery onto their property and an outbreak does occur, the assistance may be forfeited, and owners may be responsible for the cost of the works.

Next post
Firearms and 4WD stolen, vehicles damaged near Collarenebri