CAREY’S Freight Lines made it four from four on Saturday as they continued their winning run in the Wests Entertainment Group 9s at Scully Park in Tamworth with some breathtaking attack.

The brilliance of skipper Brenton Cochrane was there for another capacity crowd to see as the former Narrabri Blue led the green and golds superbly from the front.

His ability to manufacture chances from anywhere on the field inspired the CFL side to a 17-4 win over Shay Brennan Constructions and then a last minute 18-15 win over the JT Fossey side.

He also pocketed another Bottlemart Man of the Match Award, his second of the tournament, in the 13-point victory over Shay Brennan Constructions where he scored two tries, one of them an 80m breakaway five pointer.

His last-minute play to create a try for Nathaneal Slater was a simple but selective piece of artistry to maintain the unbeaten run, overtaking a 15-14 deficit and claim an 18-15 win.

“It was another great effort,” Brenton Cochrane said of the two wins. 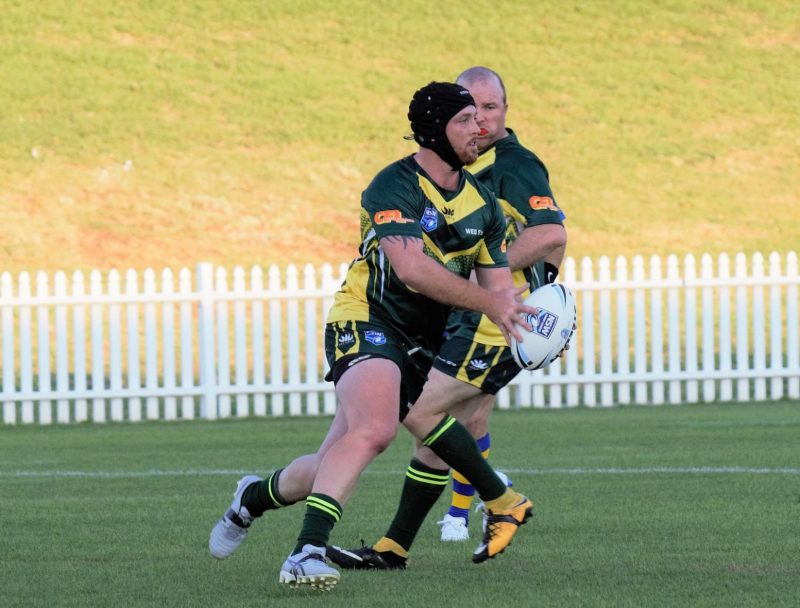 Moree’s Ben Williams in action. He was awarded Bottlemart Man of the Match in CFL’s 18-15 win over JT Fossey (Image Courtesy of Jason Smith).

“The first time we’ve had to come from behind. You’ve got to be positive. There was no doubt (in my mind) we’d score.”
JT Fossey captain Mitch Doring was disappointed with his side’s losses, especially the last-gasp loss to CFL.

“It just came down to defence,” he said of the fluctuating final game where the lead changed six times.

“That’s what wins these games. We went try for try with them but that’s 9s footie. That’s how it goes sometimes, it was a good game, some good footie”.

Moree’s Ben Williams won the Bottlemart Man of the Match for that game.

“It showed how good this side has come together,” Williams said.

“We were just thrown together, hadn’t had a training run and can only get better and better.”

“We were a bit better but our defence wasn’t great. We created some opportunities but just didn’t finish off.”

Tom Woolaston’s 40m try was the only significant result from a lot of effort and near misses for the SBC side.

Carey’s Freight Lines’ two wins started and ended a second round of WEG 9s where the Marius Street Family Dental side won the two middle games.

Scott Blanch’s MSFD side beat JT Fossey 11-4 in the second game of the night and then backed up to beat the Shay Brennan Constructions side 23-6.

With Blanch and a few of his teammates away next week it was imperative his side struck and so they did, beating JT Fossey in a fluctuating game and then over running Shay Brennan Constructions 23-6 with some flowing football.

“That first game against Mitch’s side was quick,” Blanch said of the 11-4 win over JT Fossey.

“We did have a good rotation tonight. Played well and had a lot of fun.”

While Doring was outstanding for the beaten side Uralla’s Shuaib Rhodes-Swain was a standout for MSFD.

He made the tackle and try-saver of the competition so far when he stopped Gillham from scoring in the first half.

Trailing 4-nil after a Lachlan McGrady try out wide for MSFD Boggabri Kangaroo star Matt Gillham started an attacking raid near half way. He backed up to take the final inside pass and looked set to score until Rhodes-Swain stopped him in his tracks and then rocked him backwards from the tryline.

A minute later and the “hyphen” was steamrolling Shannon Swan with a rib-jarring tackle and was unlucky not to score a couple of tries with his speed on the left flank.

He and Gunnedah Bulldog, Deacon Sankey, caught Blanch’s eye with some brilliant moments and has him confident his side can be a finals force in the inaugural WEG 9s.