We will remember them: 25th Annual Allied Forces and Nashos’ Reunion an emotional event

MORE than 200 locals and visitors packed the Moree Services Club auditorium on Saturday evening to reminisce, laugh and shed just a few tears at the 25th Annual Allied Forces and Nashos’ Reunion.

Iconic 1960s entertainer Little Pattie, who will celebrate her 69th birthday next Saturday, took everyone back to a decade of innocence – and to a war that divided nations across the globe.

Along with Col Joye and the Joy Boys, Little Pattie entertained troops at Nui Dat in war-torn Vietnam and was performing on stage when the nearby Battle of Long Tan broke out on August 18, 1966.

“We were pulled from the stage and thrown into jeeps, and taken away,” she told a captive audience.

And Little Pattie proved on Saturday that age has not wearied the voice that took her to the top of the Australian music industry more than 50 years ago after being discovered by scouts at a Maroubra Beach talent contest in the early 1960s. 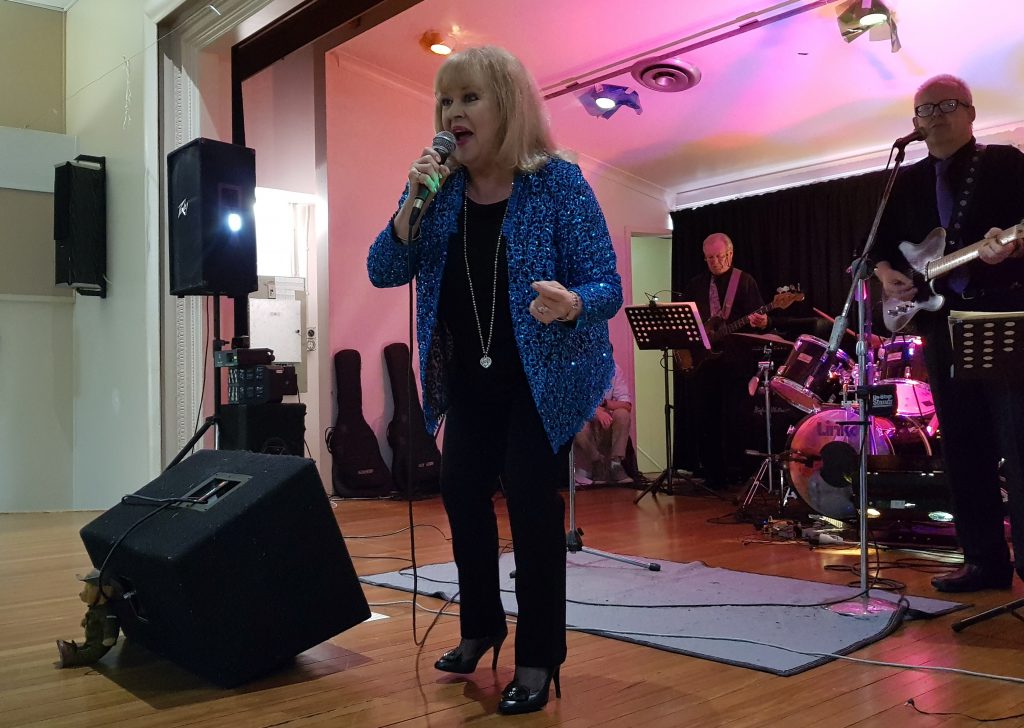 Her voice is as strong and sharp as it was in 1963 when she rose to the top of the charts with her debut single, He’s My Blonde Headed, Stompie Wompie, Real Gone Surfer Boy.

And just as the hall-full of returned men and women roared when she belted out the song that made her a household name, the collective crowd fell eerily silent with her haunting rendition of Louis Armstrong’s What a Wonderful World.

Moree Plains Shire Council deputy mayor Stephen Ritchie said the reunion – just the second time the event has been held in Moree – was a win-win weekend for the district.

“This weekend is a big positive for Moree and I really hope that it becomes an annual event and a permanent fixture on the local calendar,” Mr Ritchie said.

“It can only get bigger and better and our town can only benefit by hosting such an event like this.

“I’ve always regarded myself as one of the lucky ones by missing national service but, when I think about it and see everyone here for this reunion, maybe I was the unlucky one. 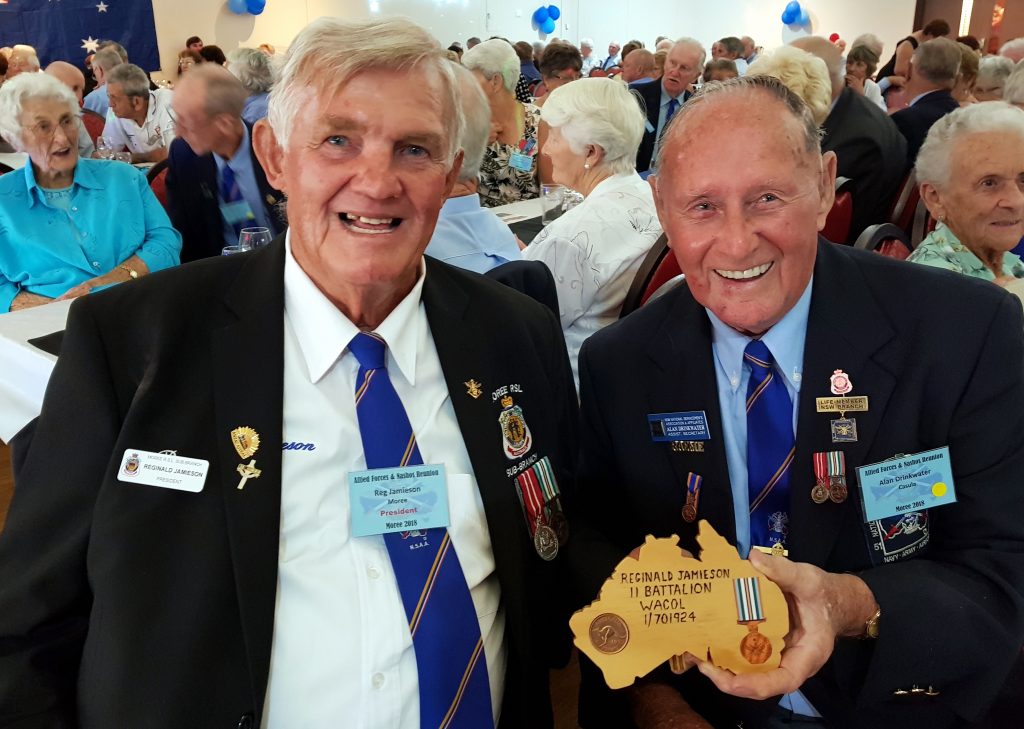 “I was a bit of a larrikin in my younger days, so I think national service would have been just what I needed,” he chuckled.

“National service has a very long, rich and strong history and national training was introduced in 1910,” Mr Tramby said.

“Australia was the first English-speaking nation in the world to bring in national training – it wasn’t national service – and we were the only nation that didn’t bring in compulsory service during the first world-war.”

Mr Tramby also paid tribute to the hundreds of chopper pilots that were so crucial to survival during the Vietnam War.

“I pay tribute to these compatriots who supported us in that conflict. We needed choppers to go in and sometimes that was a bit hairy, but they also came and got us out and that was even better.

“They also came in and took our wounded out and we saw some incredible bravery when they brought those choppers in under tough conditions at night – and they never hesitated to come in and get our boys out,” he said.

Emcee Michael Andersen again proved he is one of Moree’s hidden treasures, with a rousing recollection of a recent ANZAC Day dawn service, where rain held off until the service was complete. “Everyone’s attention was focused on the Window as the invitation was issued to join in the singing of the hymn traditionally sung at ANZAC services, Abide With Me,” Mr Andersen recalled.

“The Padre’s prayer was offered and, with a mist forming – in my eyes at least – the dedication was made leading into the laying of wreaths.

“The call was made to the diggers, the officials and those who had assembled, to pay respects and display gratitude, to face the west. The bugle sounded The Last Post. A minute of silence was observed as tears rolled down cheeks for those who have been in silence for the past 99 years.

“With the recitation of the Ode of Remembrance we were instructed to turn to face the east as the bugle sounded Reveille,” he said. 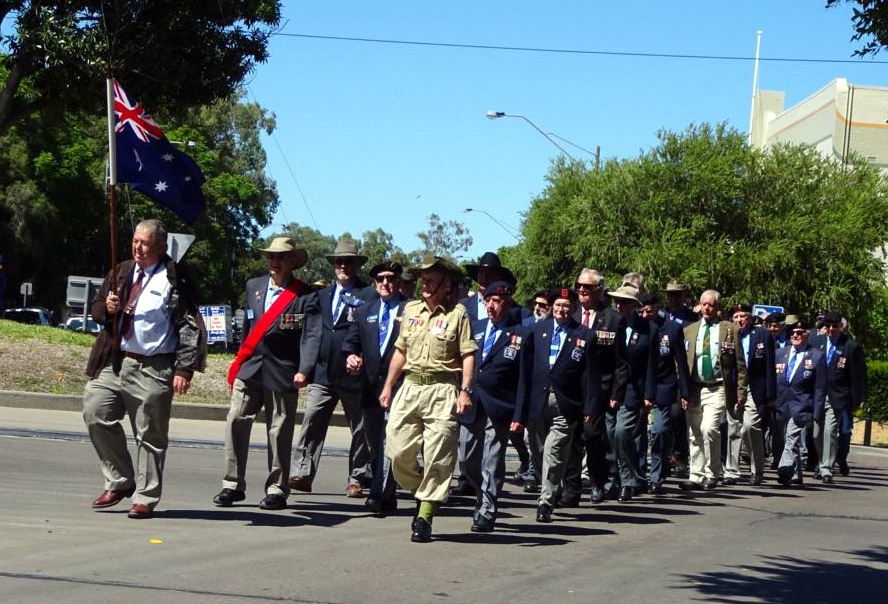 “To conclude, all sang with a humble pride, for that’s the only way I can honestly describe the way we sang the national anthem . . . humbled by the occasion, proud to be Australian.”

Mr Andersen told the silent hall that dawn by this stage had broken and to the south-west rain was visible, and that cracks in the cloud to the east had widened to permit early morning light to fall on to the assembly.

“Softly a drizzle fell and with the risen sun now penetrating through the slowly disintegrating cloud, a full 180 degrees of a rainbow arched high in the misty firmament . . . I felt small,” Mr Andersen said.

“The walk to the dawn service was a walk of anticipation. The walk home was one of reflection.

“Each day I give thanks to those who fought to keep this country peaceful and free. As circumstances have it I have never been in the situation that those remembered were in.

“Quite a few years ago I attended a dawn service where there were more marchers than members of the crowd.

“In 2014 those in attendance numbered in the hundreds . . . gathered around the War Memorial Window, in the car-park, on the footpath and filling the adjacent street.

“After 99 years we do remember them . . . lest we forget,” Mr Andersen said proudly.