REGIONAL: For the first time sports like cricket, rugby league and touch football will be able to be played after dark at Warialda with Northern Tablelands MP Adam Marshall today announcing a $414,807 State Government grant to install lights at Nicholson Oval.

Mr Marshall said the project would make sport more accessible for the community, all year round.

“Currently, the field doesn’t have any flood lights. This makes it difficult for clubs like the mighty Warialda Wombats Junior Rugby League, which has to juggle multiple teams that all need to train before the sun goes down.

“By installing a number of LED light towers, each connected to a 3 phase 240 volt power supply, power meter and switchboard, that scheduling pressure will be eased with play allowed after dark.

“The lights will be designed to meet the standards of a number of sports including cricket, rugby union, touch football, league tag and athletics. 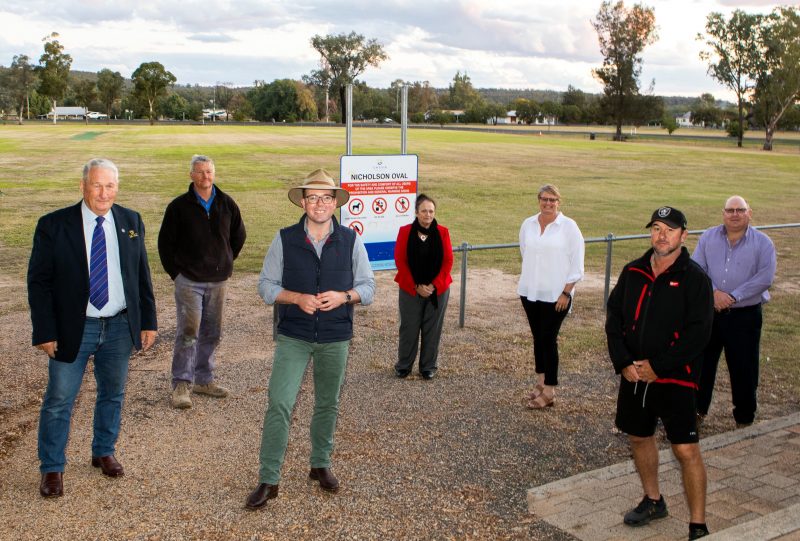 “Summer sports like cricket will be the big winner from this project with competition matches being able to be played in the evening, out of the scorching afternoon heat.

“The high temperature does affect participation rates in cricket, with the Warialda Sports Council (WSC) hopeful the lighting will provide flexibility of starting times and create a boost in player numbers. The lights will also provide an opportunity to develop T20 or T16 twilight cricket competitions on weeknights,” Mr Marshall said.

Gwydir Shire Councillor David Coulton said securing the grant had been the culmination of lots of hard work by the Warialda Sports Council.

“Nicholson Oval is utilised by at least five different sporting clubs and all three of the town’s schools,” Cr Coulton said.

“The upgrade will provide greater playing flexibility for all user groups while also greatly improving the safety and amenity for hundreds of local children and adults.

“The project is expected to take eight months to complete with pre-planning already underway.

“Tenders for construction will be advertised in August and work is expected to be completed by the end of January 2021.

“Council staff and local contractors will undertake the power supply upgrade component, with a formal tender process used for the remainder of the project.

“The addition of lights at Nicholson Oval has been a council priority for many years, however due to the high cost, we’ve not been able to pursue it.

“I want to extend my thanks to Adam and the State Government for their support in switching on this important project for our community.”

Moree gets $1.8m slice of roads and community projects program worth $1.8 billion