MOREE rugby league – and the town itself – lost a big chunk of its heart and a bigger slice of its soul on Thursday night, with the passing of local icon Alf Scott.

Incredibly, for 71 his 94 years Alf was directly involved at local club and regional group level with the game he loved – rugby league.

It was a consuming passion for a man that did so much for the game – and his hometown, Moree.

He kept meticulous records of all Moree games and could remember with absolute clarity every try scored, every goal kicked and every tackle made – and every player involved.

Alf shared his love of rugby league between his treasured Moree Boars and St George Dragons.

He lived and breathed both teams and if ever an ill word was said about either, Alf breathed dragon fire.

He was made a life member of Moree Boars in 1973, when the club was known as The Big M.

“Being made a life member was one of my proudest moments . . . it was something that I just didn’t expect,” Alf said in a series of articles written in 2018 to commemorate 100 years of rugby league in Moree.

In 2016 Moree Boars unveiled the Alf Scott Medal, an annual award to recognise individuals responsible for the growth, prosperity and success of the club.

“I was very emotional the night I found out that there was to be an award named after me. Honestly, I’m humbled by it,” he said at the time.

Alf was born and bred in Moree and, apart from a four-year stint in the Australian Army between 1942 and 1946, lived in the town until his emotional departure last year.

He had served his hometown well for more than seven decades.

Over the years Alf was involved with the Moree P&C Association and Moree Cancer Support Group.

Alf was given the Mayoral Community Service Award a few years ago as well but he was best known as Moree’s walking, talking encyclopaedia on all things to do with local and regional rugby league. 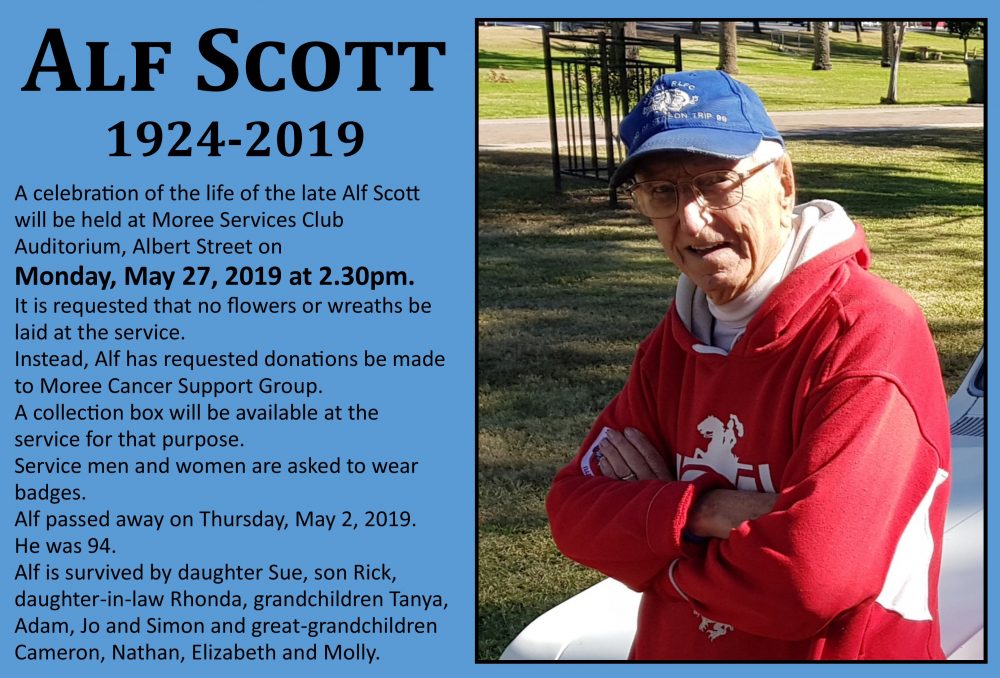 Alf was born in Moree in 1924 and it took him 94 years to leave the damn place – a place he cherished.

But, deep down, he knew being closer to family was what he really wanted in his twilight years.

Alf left the black-soil plains in July last year, sharing his time with daughter Sue in Sydney and son Richard in Perth.

“We asked dad if he would like to try living with me for six months of the year and with my brother for the other six – he said he would give it a trial,” Sue smiled.

After selling his beloved HR Holden, Alf jumped on the Northern Tablelands Xplorer – he still called it the ‘red rattler’ – and headed to Sydney.

And the old red rattler just might have provided a better ride.

“It was the worst trip ever as the train was damaged just near Edgeroi and he was transferred to a bus which finally arrived in Sydney at 9.30pm – it was not the best start,” Sue said.

“After a couple of weeks he was feeling a lot better and was settling into my home in Blacktown which he shared with my daughter Tanya, our Labrador Sunny and myself – Sunny would always go and say goodnight to Alf with a lick,” Sue smiled.

Alf began his new life close to family with gusto – he didn’t know any other way, really.

“Dad enjoyed going over to his grand-daughter’s restaurant and having a meal and trying unsuccessfully to pay but always left a tip for the waitress. He enjoyed going to the movies, going for a walk in the neighborhood and making new friends,” Sue said. 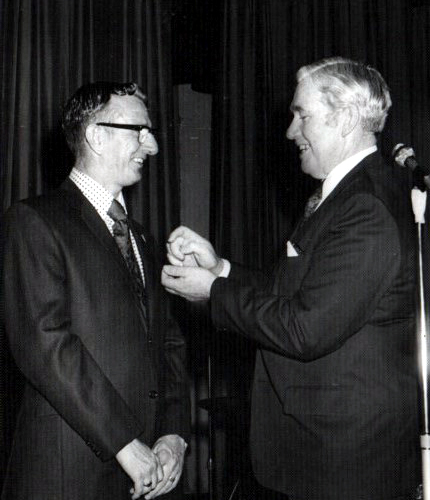 “We purchased TV earphones so that he could keep up with the politics on ABC Question Time and his grand-daughter brought his first smartphone so he could keep in touch with his Moree friends.”

He landed in Perth – business-class, of course – to live with his son Rick and daughter-in-law Rhonda.

Once again earphones were purchased so the television did not need to be so loud.

“He could watch his favourite shows and when the rugby league season started, he would watch all the games,” Sue said.

Alf remained active right to the end. He walked daily and enjoyed evenings out at the movies or Perth Crown Casino.

“He really enjoyed the time that he had with his great-grandchildren, who called him GG (great grandpa), and particularly at family get-togethers and celebrations.”

Alf was admitted to hospital during the Easter long weekend after suffering a fall.

“Even in hospital, dad continued to give instructions, kept an interest in current affairs and always had his sense of humour,” Sue said.

“On his last evening with us, dad watched the Rabbitohs defeat the Broncos. He watched with interest – and running commentary – and was surrounded by his close friends and family.”

“Alf was just a great old fellow and stuck with the Boars through thick and thin,” Todd said.

“There wasn’t a person at the footy that didn’t like Alf – everyone loved him and everyone knew him; he was just a terrific fellow.

“He stuck solid with Moree. We had some pretty tough years there for a while, right back to when we lost the league club through to the present – there haven’t been many easy times and we’ve been on the end of some pretty big floggings.

“But Alf always remained upbeat and positive, and there was never, ever any sort of negative talk. With Alf, there was always positivity – he could always put a positive spin on things,” Todd said.

“He just loved the Moree club and right up until he gave away doing the record-keeping and score-keeping – in about late 2017, I think it was – he was still getting on the bus and going to games,” said Todd, a former A-grade club coach and club president.

“Alf has left a massive hole in local rugby league. Even though he had gone to Sydney and Perth to be with family, I’d ring him every few weeks, or he’d ring me . . . it always felt like he was still around,” he said.

Todd spoke to Alf the morning the local rugby league legend passed away. 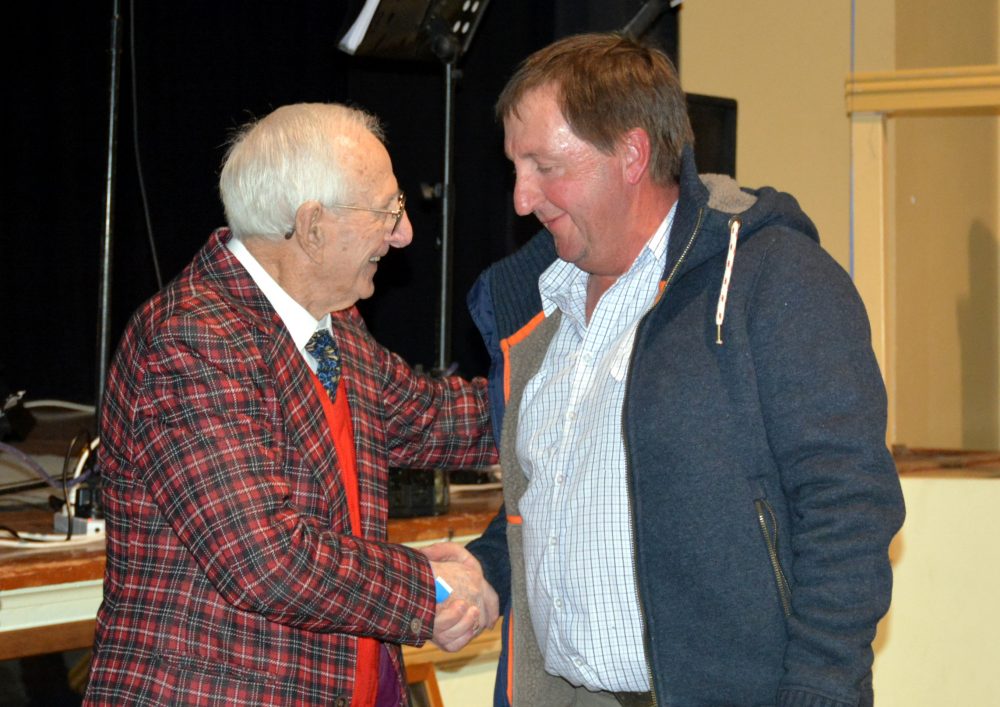 “We were on the phone for about three-quarters of an hour and even though he told me that his days were limited his mind was still focused on footy – he still wanted to talk about football,” Todd smiled.

Moree Mayor Katrina Humphries said Alf was “a real character” who was very much respected in the Moree community.

“Memories of Alf go right back to when he was a much-respected team member of the Assef’s staff. Alf knew every size of every article and had the patience of a saint when serving and helping indecisive customers,” Katrina said.

“Alf was one of the great rugby league mentors. He had a passion for the game and an understanding of the rules, and should be recognised as one of Australia’s greatest talent scouts.

“Our community is better for having had Alf in our lives. Rest in peace Alf as we mourn another local legend, returned serviceman and all-round decent bloke who loved the bush and loved rugby league,” she said.

A celebration of the life of the late Alf Scott will be held at Moree Services Club Auditorium, Albert Street on Monday, May 27, 2019 at 2.30pm.

It is requested that no flowers or wreaths be laid at the service.

Instead, Alf has requested donations be made to Moree Cancer Support Group. A collection box will be available at the service for that purpose.

Service men and women are asked to wear badges.

Share
Share:
Moree a cultural mecca as Moree On A Plate celebrations bring food, wine, art and entertainment to town

Moree a cultural mecca as Moree On A Plate celebrations bring food, wine, art and entertainment to town