SEPARATE accidents north and south of Moree over the weekend that saw two people killed and a man in hospital in a critical condition has prompted Barwon LAC police to urge motorists to pay more attention to life and the law in relation to driving, especially during school holidays.

Following a horror 24 hours on local roads, police will prepare a report for the coroner after a male and female in a south-bound Holden sedan were killed following a head-on collision with a north-bound heavy vehicle on the Newell Highway 20km north of Moree at around 7.35am Saturday morning.

There are also unconfirmed reports that large amounts of cash was strewn around the accident site.

The 42-year-old male driver of the heavy vehicle was taken to hospital for observation and mandatory testing.

The Newell Highway was closed in both directions until late Saturday evening. 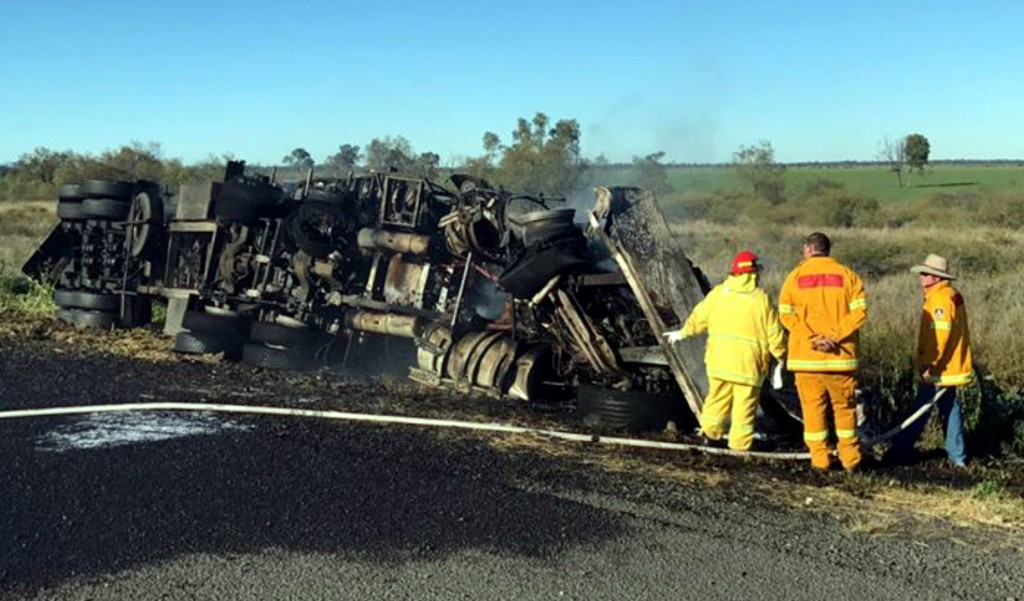 Emergency crews worked tireless throughout Saturday at the scene of a horrific head-on collision north of Moree that claimed the lives of two people (Image: Live Traffic).

Less than 24 hours later emergency services were called to a second serious head-on collision on the Newell Highway approximately 15km south of Boggabilla.

“It’s during this time that drivers need to be more vigilant than ever to the risks of long-distance driving.”

Speed, fatigue, distractions from passengers and mobile devices, road works, livestock and native animals are all factors that motorists, both local and visiting, should be aware of.

Mr Burke said that too often motorists take unnecessary risks in order to get from A to B despite the significant attention given to the ever-increasing road toll.

In addition, he said, police have been witness to unrestrained drivers, suspended drivers, unregistered vehicles and 18 speeding offences. Three motorists tested positive to a road side drug test and two motorists were charged with drink driving offences.

“Responsibility for road safety must be put back on the drivers,” Mr Burke said.

“Drive to the road conditions, obey speed limits and above all exercise extreme caution. With the privilege of driving comes huge responsibility.”