LONG haul truck drivers have threatened to bypass the Moree Bypass and navigate heavy vehicles through the CBD if rock-throwing continues along the notorious stretch of highway.

The bypass, 40 years in the making, was implemented to keep heavy vehicles out of Balo Street.

It was opened last year but has become a hotspot for rock-throwing vandals targeting trucks as well as vehicles. 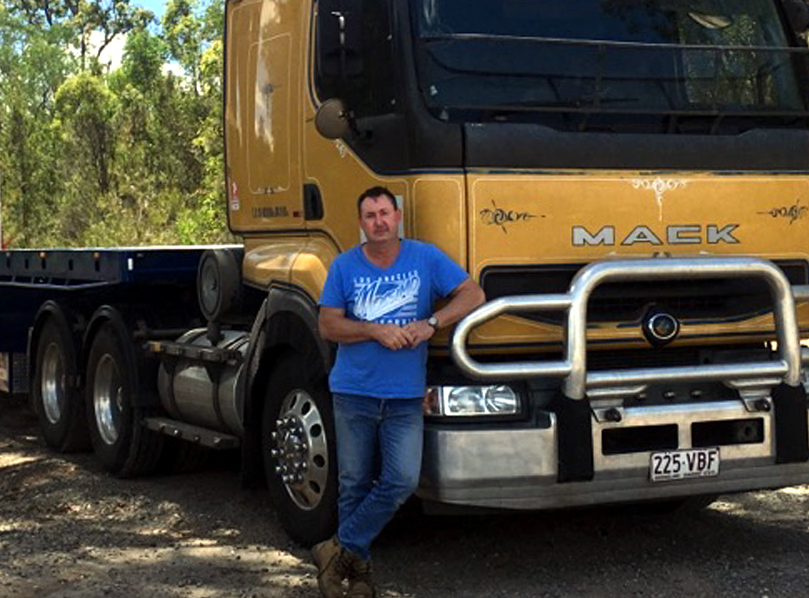 In recent months there have been nearly 50 incidents of trucks being pelted with rocks – the preferred missiles being railway ballast that is plentiful along the eastern side of the bypass.

Mr Myers, 46, was lucky to escape serious injury in early October when a cricket ball-sized rock was hurled through the windscreen of his rig.

At the time he was treated at Moree Hospital for a gash to his forehead that required six stitches.

Now, nearly three months after that horrific near-miss, it has emerged that interstate truck drivers traversing the Newell Highway via the Moree bypass are continually being targeted by rock-throwing vandals.

“I know of at least 45 incidents in the last couple of months where trucks have been pelted with rocks,” Mr Myers said.

“In one case a youth was in the middle of the road slowing down one truck, which kept moving. “When the kid jumped out of the way, the two trucks behind were pelted with rocks.

“It has got to the stage where truckies will go back to driving through Moree the way it was done in the past – straight down the main street,” he said.

Moree mayor Katrina Humphries urges truckies to be patient, and to work with authorities to resolve an issue that could possibly one day cause a major accident, even death.

“We are working hard to try and fix this problem and I urge all truckies to be patient and let us try and work through this,” Cr Humphries said.

“The idea of driving up the main street is a shame, because that’s not going to solve the problem – and it is a major problem.

“We’ve been trying very, very hard to work with the community, because it is the community that has got to bring these kids back into gear.

“We are also working with the RMS and Transport NSW to put better barriers around the mounds on the bypass,” she said.

“The area needs better lighting as well as CCTV strategically placed along the bypass.

“We are trying extremely hard but we also have to deal with a ‘silent’ community who refuse to put these kids in, or stop them from what they’re doing,” she said.

The worst-hit area is the stretch of highway between the Gosport Street ramp and the southern approach near Bullus Drive.

There is no CCTV along the notorious stretch of road and security fencing along the eastern side of the bypass is considerably damaged despite the number of times it has been repaired.

Presently, there is a panel of fencing missing from one section near Moree Railway Station.

Mr Myers, a Bowen-based owner-operator who runs four flat-bed trailers mainly from his Gold Coast yard, said he and fellow drivers are at wit’s end.

“It’s just gotten too much – a serious accident is waiting to happen,” he said.

“I have been in touch with Moree council as well as Moree police and I have no gripes with the work they are doing and are trying to do – they are doing everything in their power to try and help fix this problem. Seriously, I’d hate to have their job.

“But the situation is just getting so out-of-hand that drivers will sooner or later have no choice but to avoid driving down that section of the bypass, and go back to driving through the Moree CBD,” he said.

Cr Humphries agrees that a major accident was likely if a solution wasn’t found.

“There is no doubt that it (rock-throwing) will one day cause a shocking accident – and it will more than likely be some poor, innocent person coming from the opposite direction with a carload of kids on school holidays that gets wiped out,” she said.

“The community has to step up. The locals that know who these offenders are – and it’s my understanding that they are children – have to get these kids under control.

“And the best way to get these kids under control is to hit the parents.

“If the offenders are under-age and cannot be punished then they are the responsibility of the parents, and the parents have to face the consequences.

“The laws have to be changed to help innocent people – not provide a cover of protection for bad people,” Cr Humphries said.