Things that ‘can’t be done’ in agriculture, can says Dale Trevorrow

DALE Trevorrow is used to hearing how things ‘can’t be done’ in agriculture, and it makes him that much hungrier for the challenge.

This progressive Victorian producer has no hesitation eschewing tradition, currently running a successful irrigated cropping and grazing enterprise in a region, he was assured, was unsuitable for such endeavours.

“Here in the Kerang district it’s primarily grazing country, we have a lot of dryland farming to the west, but a lesser amount in the way of irrigated crop production,” Dale explains.

“People thought we were mad when we began developing the property 15 years ago, but we haven’t looked back.”

“I think that as a younger generation of farmers we’re not quite so set in our ways, I’m very open minded in terms of alternative methods that may make us more viable and am always keen to look outside the square.”

Dale is hesitant to the suggestion that he, together with wife, Michelle, are pioneers of irrigation in the region, but admits that their property – situated between Murphy’s Lake and the Loddon River – is ‘probably’ one of the largest in the region.

And it’s capturing the attention of the national, and international, agricultural industry.

Recently the Trevorrows were approached to take part in the inaugural Australian pilot season for Indigo Wheat, a microbal inoculant designed to protect yields from environmental stress. 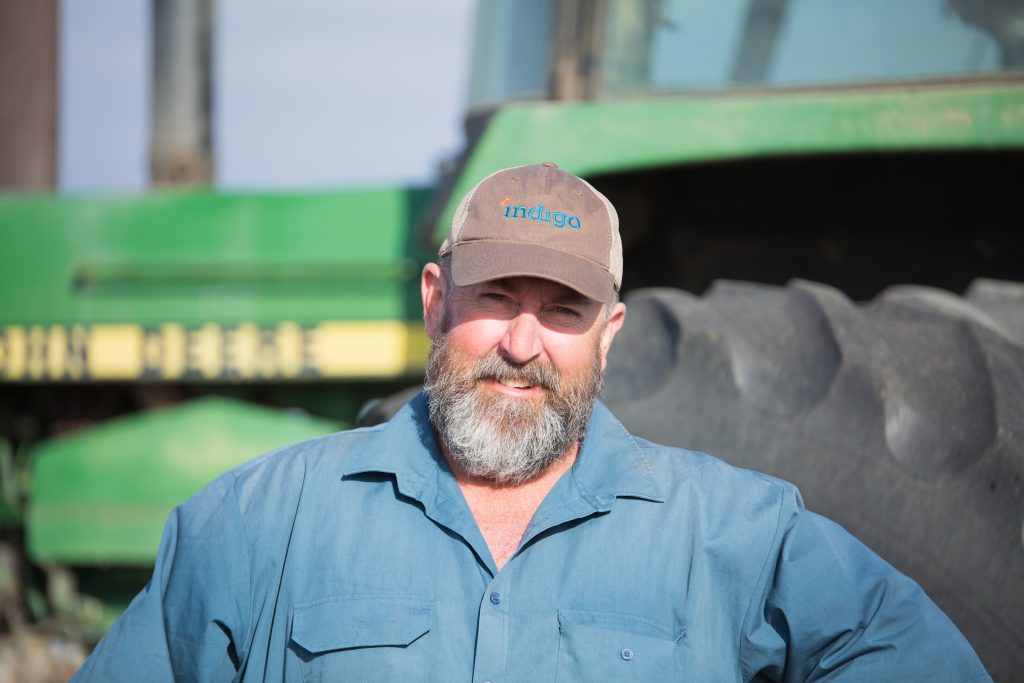 Victorian producer Dale Trevorrow says he always keen to look outside the square.

Developed in the USA by Indigo Agriculture, the product has enjoyed huge success internationally by utilizing beneficial plant microbes to improve crop health and productivity.

Of Dale’s 270 hectares, 160 hectares was planted under a lateral irrigator, with the remaining 80 hectares planted into a flood irrigated field.

For a controlled comparison, untreated wheat was sown into 20 percent of each field.

A delayed planting posed challenging, but true to form, Dale took it in his stride.
“We had 100mm in April so it was too wet for our optimal May planting, but we eventually got onto the paddocks in the first week of August,” Dale said.

“Everyone told us we were mad planting in August, but again, our results have put paid to that,” Dale laughs.

During the growing season he admits that visually it was difficult to see any variation in the plant growth comparably, but once the headers wheeled in the results were overwhelming.

“Our yield mapping suggested an overall increase of up to 14 percent on treated wheat compared to non-treated, which is absolutely outstanding,” Dale said.

Inputs such as fertiliser rates, herbicides and top dressings were consistent across the paddocks, with all crops sown with a John Deere disc planter, minimum till.

While late, conditions were favourable, with a full profile going into planting, 34mm on planting and 16mm follow up rain two weeks later.

During September and October, Dale admits conditions were considered very dry for the region, with only 17mm through the growing period.

As such, the crop was supplemented by two flood irrigations in one paddock, while the other paddock received two 30mm applications under the sprays.

The crop was eventually harvested between Christmas and New Year.

With the flood irrigated paddock also previously fallowed, it enjoyed the greatest yields, with a maximum of eight tonnes to the hectare.

“When its pouring into the chaser bin you don’t tend to notice an increase of a couple of tonnes to the hectare, but it’s a drastic increase when you look at the figures overall,” Dale said.

“If you could get those results every year then it makes farming extremely lucrative.”

With the average overall yield of six and a half tonnes to the hectare, Dale enthuses it represented an ‘exceptional year’.

And with the greatest gains typically seen where baseline yields were below four tonnes per hectare, he believes it will change the face of cropping in more marginal regions.

“Whether it’s climate change or a cycle we’re in, we know for a fact that conditions have been changing since the industrial revolution, and it’s yet to be seen how it will continue, so the fact that we can grow these phenomenal crops with the same inputs is really exciting,” Dale believes.

While the biggest concern for most farmers is cost, the fact that Indigo Agriculture works off a ‘no result, no pay’ scenario, hence there is zero risk involved.

“If the product doesn’t perform, then there’s nothing to pay so I don’t know why people wouldn’t have a crack,” Dale said.

Melbourne born and bred with a building industry background, Dale’s first introduction into farming was on small family owned block at Woodend in 1992 where he reared and turned out dairy beef calves on the side, while laying tiles by trade.

“Eventually I was up to 350 cows and thought here we go, it’s time to get a bigger farm,” he said.

This prompted the purchase of the initial Kerang block in 1996, a more favourable growing region, where he has gradually increased his holdings to 3,500 acres consisting of beef, cross bred ewes, cereal and oilseed cropping plus hay.

“In Woodend we grew turnips to finish off the lambs, ensuring they could feed through to May and when I suggested I try it in Kerang it was very much discouraged,” he said.

Needless to say, Dale has grown turnips in the region with significant results.

“I’m always on the lookout for innovation and opportunity, and Indigo Wheat is definitely the most exciting progression I’ve come across in recent years,” Dale said.

“It will definitely be part of our rotation going forward, and I can’t wait to see what further results we can achieve.”

Indigo Ag has recently launched Indigo Wheat and Indigo Barley to the Australian market, and is currently looking to partner with growers across wheat belts nationally prior to 2018 winter planting.

$369,000 to help tackle youth addiction in Moree and Boggabilla