TAKE a female Pommy jockey that hadn’t ridden an outright thoroughbred winner after 16 years of trying.

Add to the mix a trainer that was just a couple of months ago entrusted with a big team of horses and who was also finding that breakthrough winner elusive.

Throw in a rising six-year-old gelding bought by Brody Cummins for just $600 so the Pommy rider in question could kick-start her picnics’ career, and then team them up at a rustic bush track that only sees a mob of horses once every 12 months.

It’s a story that would have had Banjo Paterson reaching for his quill and inkpot had he been trackside at Garah last weekend.

The latest chapter of bush racing was wrapped up at the historic Talmoi track when 38-year-old English rider Katie Spalding – who honed her craft at leading stables in England and Dubai – rode the race of her life to win the 1000m WJ Matthews-WB Newcomen Maiden Plate on Kentuckian for Tamworth trainer Melissa Dennett.

It was a career-defining win for both ladies – a first for Dennett as a trainer and an outright first for Spalding, whose gold-pass entry to the winners’ circle is indeed somewhat intriguing.

Spalding had previously ridden a winner – and a Group 1 winner at that – when competing in the Global Arabian Horse Flat Racing Festival at Melbourne’s Caulfield racecourse two years ago (cue Banjo).

And two weeks prior to winning at Talmoi she had shared the spoils with fellow rider Ricky Blewitt when dead-heating for first at Mallawa.

Banjo just wouldn’t know where to start had he still been around.

Spalding was on Doug Fernando’s Beau in Chains at Mallawa when the gelding dived late to share first prize with Luke Morgan’s emerging sprinter Folkstone.

“It took me 16 years to actually get a thoroughbred winner – I wasn’t giving up – and I didn’t get the whole winner, either,” she chuckled.

“But, at the same time, I wouldn’t want to share it with anyone other than Luke Morgan, whose stables are right next door to Melissa’s. 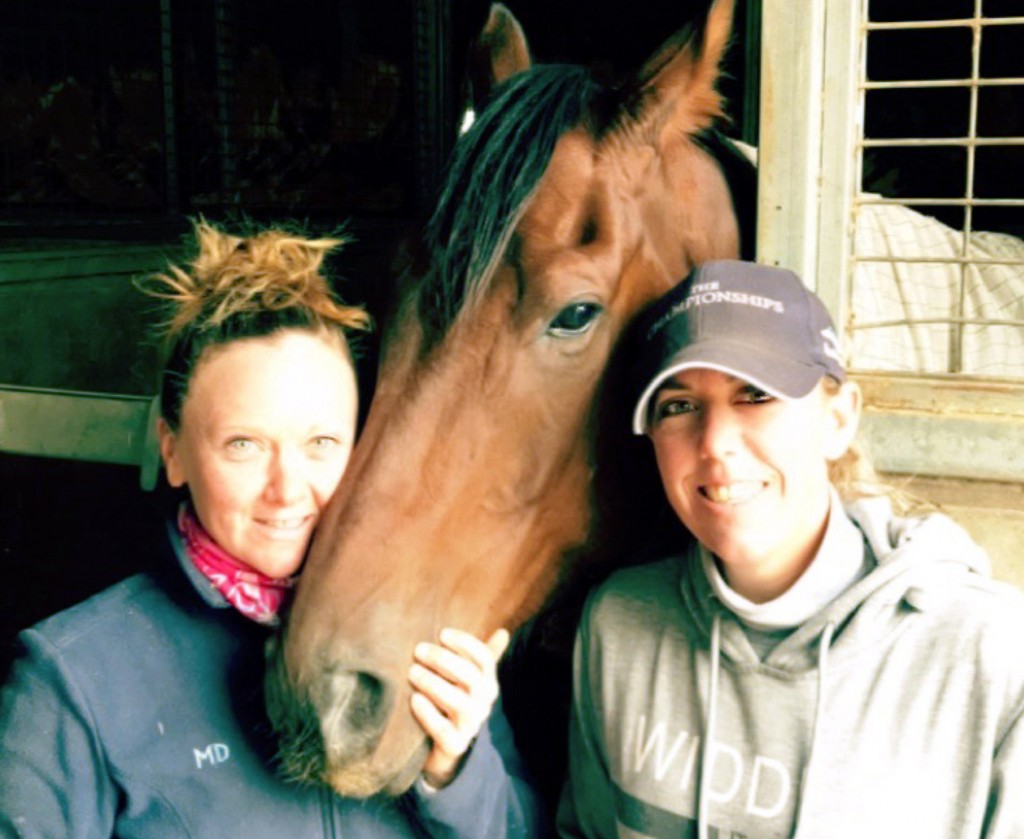 “Luke is a lovely fellow – if I had to share my first win with someone, I’m glad it was Luke.”

Spalding only had to wait a fortnight to claim her first outright win, however, when Kentuckian held on bravely at Garah.

“It was really, really good, and it was Melissa’s first winner as well which made it even more special.”

Dennett has seen big-race success in recent years when stable foreman for Leon Davies – whose large team she now trains – but says winning a nondescript $2500 maiden at Talmoi with Spalding in the saddle was a very special moment.

“It was good that my first winner was with Katie because she has been a really good friend to me over the last year or so,” Dennett said.

“It’s been a little bit frustrating (getting that first winner) because I’ve had a few runners here and there that have been favourites and ones that I thought would win.

“But racing is racing – it’s not that straightforward,” she said.

In fairness to Spalding, too, the last 16 years hasn’t been entirely spent on horseback chasing that career-first winner.

During that time there were extended periods away from the racetrack and longer periods when she was purely a trackwork rider only.

And, along the way, she became a mum.

Spalding began her apprenticeship in England with Henry Candy however injury from a race-fall curtailed a promising career.

She was 20 at the time and fresh out of college, and following in her father’s footsteps.

“My dad was a jockey and he told me I wasn’t allowed to go straight into racing without something to fall back on,” she said.

“But I’ve been riding since before I could walk, and was riding work at the age of 13 for a trainer that my dad used to ride for.

“I wasn’t that far into my apprenticeship when I had a bit of a nasty fall and had two discs removed. The poor filly I was riding broke her leg,” Spalding said.

After more than a year spent healing and convalescing, Spalding was offered a riding contract in Dubai when she returned to the track.

And while the career move went “a little bit pear-shaped”, she stayed on and rode trackwork for trainers Erwan Charpy, Doug Watson and John Hyde.

“While with John I helped break in the babies for Sheik Hamdan,” she said.

Spalding landed on Australian shores in 2006 with her Aussie sailor husband Michael, who she had met in Dubai the previous year.

“Michael was serving in Iraq at the time and would always come to Dubai during his weeks off,” Spalding said.

Based in Sydney, Spalding rode work for Graeme Rogerson and Jim and Greg Lee before baby Amelia came along.

“I didn’t ride professionally when I came out here, just trackwork, and was going to be apprenticed to the Lee brothers but I had a baby instead,” she laughed.

Once back in the saddle, Spalding was invited to ride at the Arabian Horse Flat Racing Festival at Caulfield.

“The festival is held at different tracks when in Australia, including the Gold Coast and Caulfield. Last year they were held at Morphettville in South Australia,” Spalding said.

After a stint in Cairns, Katie and Michael settled in Tamworth.

“We decided on Tamworth because it’s a very “horsey” town and there were work opportunities for both of us,” Spalding said.

“I’m here now riding work for Melissa as well as Michelle Fleming and couldn’t be happier.”

Spalding has four rides at Saturday’s Duck Creek Cup meeting at Nyngan and will also back up for rides at Wean on Saturday week.

“I had never been to a picnic race meeting before I actually began riding at them – they are just excellent – and the fields are amazing for Nyngan. I can’t believe how big they are,” she said.

Meanwhile, with Friday’s Tamworth Showcase meeting abandoned because of wet weather and the state of the track, Dennett has a few days off before saddling up runners at Gunnedah, Wean and Tamworth next week – including her old friend Kentuckian at Wean.

“Owner Brody Cummins bought Kentuckian off Sue Grills for $600 specifically for Katie to ride at the picnics,” Dennett said.

“Brody was looking for a suitable horse and came across Kentuckian – and the horse has won straight away for us.

“Sue said that the horse’s problem was that it needed time.”

Now a five-year-old and the veteran of just three starts it seems that the gelding just may have turned the corner.

“His legs go a bit everywhere and he was probably only about 70 percent fit at Talmoi, but he’s actually improved since then in fitness as well as in himself,” Dennett said.

HOOFNOTE: Tamworth races scheduled for Friday, June 30 were abandoned due to the wet weather and state of the track.

The upcoming meeting at Tamworth on Sunday, July 30 has been upgraded and will now be a Country Showcase meeting.

There will now be eight races with the 1400m class 1 handicap being divided by sex into fillies and mares and colts, geldings and entires divisions.