Moree in 2017 was filled happiness, sadness and badness.

Over the next couple of weeks, Deluxe Café Moree NEWS will look back at each month of 2017 and the stories that featured on our website and Facebook pages.

NORTHERN Tablelands MP Adam Marshall is backing a push from a Moree Aboriginal youth service to extend a ‘night rider’ bus service – helping kids stay off the street and learn about their culture.

The original artwork, My Country, tells the story of the artist’s connection to the Moree Plains and how he sees the region’s evolution to become a multicultural community that embraces so many people.

THE race will be on to see if tongs are quicker than tongues when local politicians Mark Coulton and Adam Marshall spice up the Blokes on the Barbie competition at Moree on a Plate next week (Saturday, May 13).

And while things get heated in the parliamentary bear pit, and they’ve dealt with a few pork chops in their time, their policy on the competition seems a little weak.

TAKE a female Pommy jockey that hadn’t ridden an outright thoroughbred winner after 16 years of trying.

Add to the mix a trainer that was just a couple of months ago entrusted with a big team of horses and who was also finding that breakthrough winner elusive.

Throw in a rising six-year-old gelding bought by Brody Cummins for just $600 so the Pommy rider in question could kick-start her picnics’ career, and then team them up at a rustic bush track that only sees a mob of horses once every 12 months.

WORK on a concrete slab that has been on Gwydir Industry’s wish-list for “years” will start in July, thanks to a $5500 donation from Moree Lodge Courallie.

Nearly $3000 was raised at a trivia night earlier this year and that money was matched dollar-for-dollar by Masonicare, a benevolent organisation within the Masonic movement that is the official charity of NSW and ACT Freemasons. 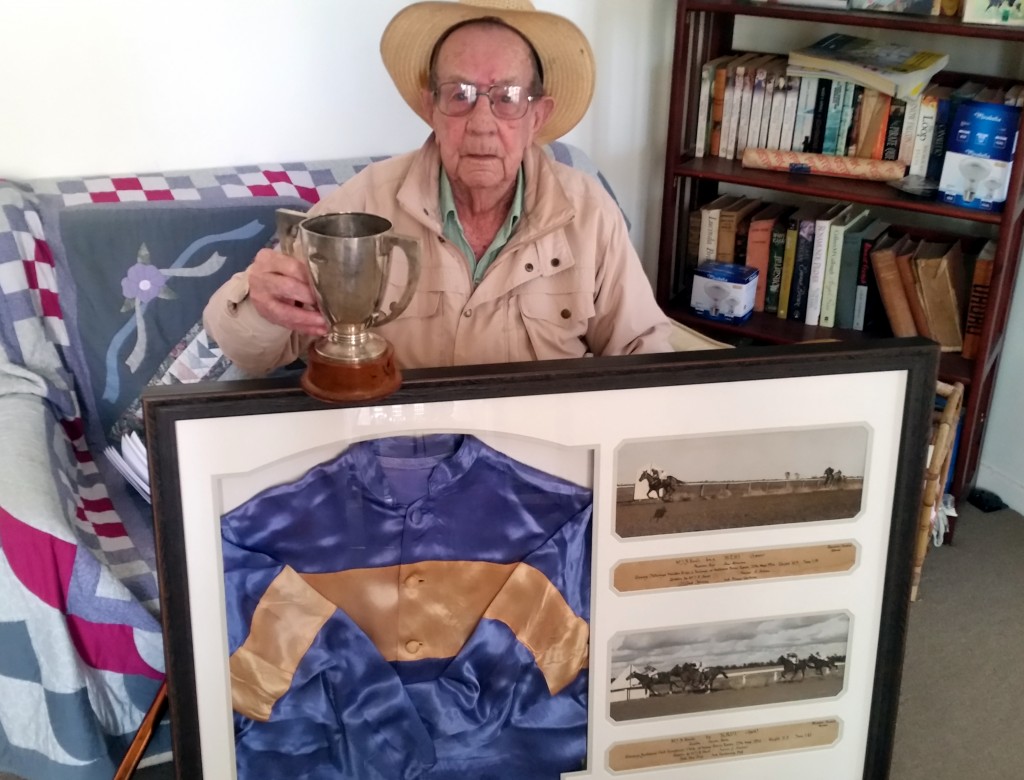 FORMER picnic jockey Bruce Hunt will next month celebrate his 90th birthday with family and close friends however there’s another engagement that he’s keen to tick off his busy social calendar – a day out at the famous Talmoi picnic races at Garah next Saturday.

HE’S a sway-backed gelding with a head that only a mother could love.

There’s also the bunged-up knee that’s not too bad if you don’t look at it for too long, and the shocking bout of hair-loss that left the remains of his once near-black coat dull and listless.

He has suffered a litany of ailments and injuries, chiefly brought about by a sweat-related illness that nearly killed him.

And then there’s Angela Taylor, the strapper who adores him.

BELIEVE it or not, fundophobia is not the fear of raising funds for charity – it is the fear of grain silos toppling over and crushing those people that are game enough to stand near them.

And there is absolutely no truth to the rumour that the Mayo Clinic will have a stall set up at B&W Rural in Moree on Sunday with specialists advising people how to overcome this strange fear or, for that matter, handing out advice on acrophobia – the fear of heights.

ONE of the giants of the NSW greyhound racing industry was remembered at Moree on Saturday with the inaugural running of the 551m Sam Sabine Memorial Stakes.

Sammy Sabine was a big man – in both stature and character – and was a staunch supporter of greyhound racing in Moree for more than 75 years.

He lived and breathed the industry and his passing in 2015 at the age of 83 left a huge void in the local dog-racing community.

Are you interested in taking a bus from Moree to the Inverell Cup meeting on New Year’s Day?

Bill Poulos is organising a coach to take to the races, and the cost will be minimal.

At this stage it will be less than $20 per person with the final cost calculated on how many people hop aboard.

It can also pick up passengers along the way at the Pallamallawa turn-off, Gravesend, Warialda and Delungra.