MOREE old boy Max Hitchins – licensee of the Imperial Hotel back in the 1960s and son of famed bookmaker and hotelier Ernie Hitchins – is once again compiling form and statistics for this year’s time-honoured Melbourne Cup.

Hitchins, known universally as Melbourne Cup Max, has been analysing the Melbourne Cup for 29 years, and his strike rate is impressive.

He tipped the quinella last year – Almandin and Heartbreak City – and this year will share his knowledge with Deluxe Café Moree NEWS readers in the lead-up to the race that stops a nation.

And while he is a self-confessed Melbourne Cup tragic – he can shoot off all three place-getters in every Melbourne Cup run since 1900 – he believes Australian racing’s newest event, The Everest, will join the race that stops a nation as one of this country’s greatest sporting events.

Hitchins was invited to the Moet Chandon Box by Matthew Anderson – the man from Moet. 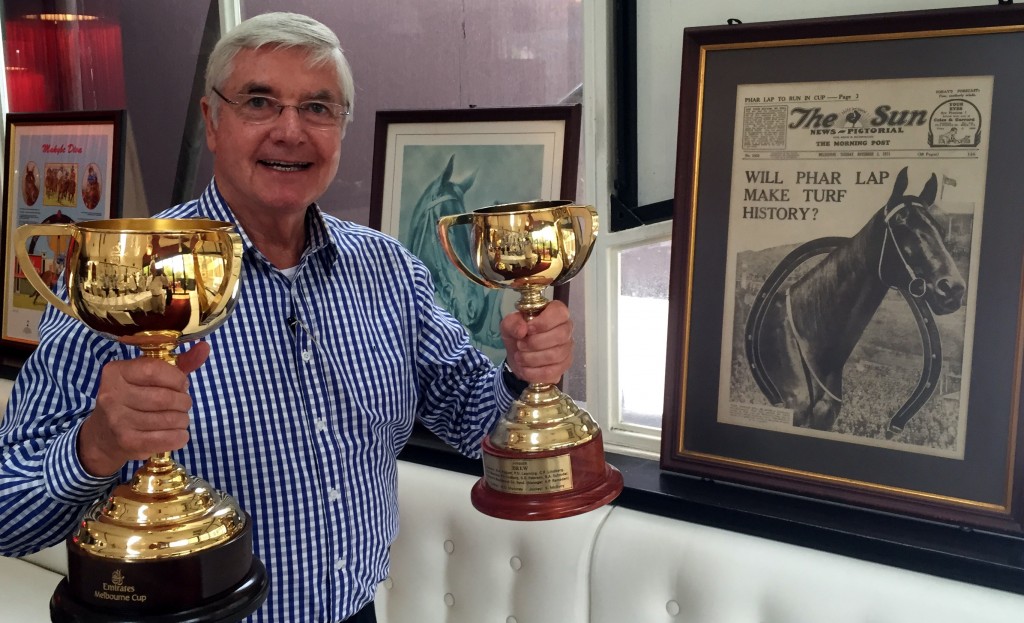 Moree old-boy Max Hitchins gets up close and personal with the time-honoured Melbourne Cup (Image supplied).

“Courtesy of Matt, I was on the rails at race time to shoot a video of the running of the Everest with my trusty iPhone attached to a Gimbal,” Hitchins said.

“In the same way all Australia pays homage to the Melbourne Cup, I believe that over the next twenty years the exact same thing will happen with The Everest.

“A very big percentage of Australians know of the history of Archer and how he supposedly walked to Melbourne from Nowra to run in the first Melbourne Cup in 1861 . . . I believe the Redzel story will take on that same legendary status in years to come,” he said.

“Redzel was orphaned as a foal when his dam died after giving birth. A foster mare was found for the colt, which developed into a strong yearling – a similar thing happened to the 1959 Melbourne Cup winner, Macdougal.

“Redzel was then bought by Chris and Michael Ward’s Triple Crown Syndications at the 2014 Magic Millions Yearling Sales for $120,000.

“The Ward brothers syndicated Redzel to a group of 17 owners, including police officers, school teachers, a doctor, taxi driver, concreter, electrician, pharmacist, former NSW cricket coach and a security guard – what a great story,” he said.

“The Melbourne Cup has been with us for 156 years. I guess I probably won’t be around in 156 years’ time but I think Linked In and YouTube may very well be.

As the lead-up to this year’s Melbourne Cup gains momentum, Hitchins will share with readers his thoughts and betting strategies for that fabulous first Tuesday in November.

Go to www.pickthecupwinner.com.au to find out more.