Bureau of Meteorology forecasts indicate temperatures will again reach the mid-40s in many inland areas today (Sunday, February 12) and the high 30s along the coast.

The temperature for Moree is expected to reach 46 degrees, with light winds from the north-west. This follows an official top of 44 degrees on Saturday.

Similar temperatures today will envelop NSW, with thermometers at Walgett and Bourke tipped to reach 47 degrees. 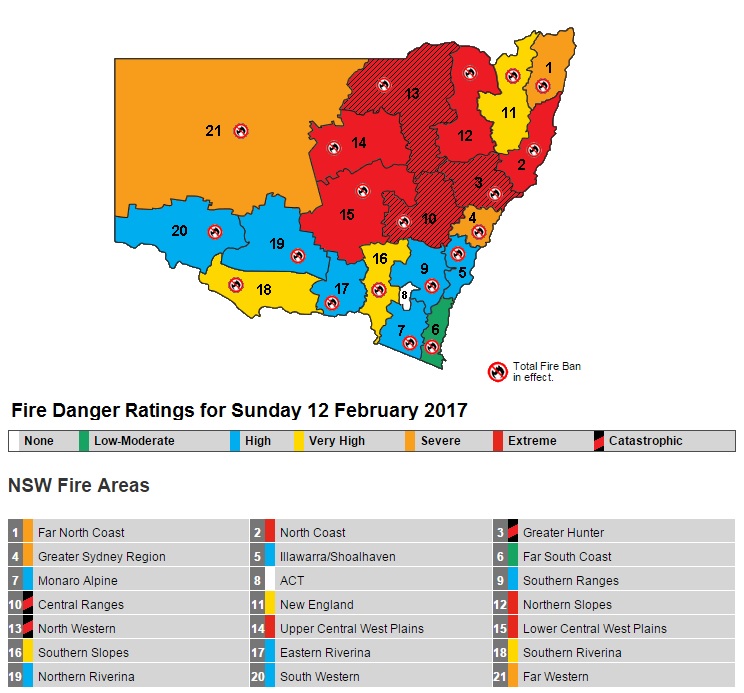 Acting NSW Regional Director Stephen Lellyett said a stationary mid-level ridge over central Australia had caused a build-up of heat over the interior of the continent over the last few weeks.

“An approaching front to the south is now dragging this hot air down across New South Wales,” Mr Lellyett said.

“Fire weather warnings are also likely during the weekend as the system will lead to increasing wind speeds in conjunction with the extremely hot temperatures,” he said.

“The forecast “catastrophic fire weather conditions” on Sunday in the upper Hunter and fringes of adjoining districts are rare in NSW. Sunday is shaping up to be the worst fire weather day so far of the season, Mr Lellyett said.

Forecast models indicate the front will sweep through the state on Sunday, leading to some relief from the extreme heat from Monday.

NSW Rural Fire Service said in a media statement early Sunday morning that a bush fire was burning to the east of Dunedoo, north of the Golden Highway.

The fire at 5am Sunday was approximately 873 hectares in size and is being controlled.

Firefighters are working on the fire which is burning in an easterly direction towards the small village of Uarbry.

Firefighters will take advantage of milder conditions this morning to undertake back-burning operations, before increasing winds and temperatures later in the day.

Residents of Uarbry and Cassilis may see and smell smoke and while currently there is no threat to these areas, residents are advised to monitor the situation closely and be prepared if the situation changes, NSW Rural Fire Service said.

Firefighters will remain on the fire-ground overnight in an effort to try and contain the fire.

Consider relocating to a safer location during the hottest and driest part of the day such as a major town that is well away from bushland or open paddocks.

Avoid travelling during the worst of the conditions. If you need to travel, use main roads and highways. Avoid backroads or tracks wherever possible.

If your life is at risk, call Triple Zero (000) immediately.

Continue to stay up-to-date with the bush fire situation by checking www.rfs.nsw.gov.au, listening to your local radio station or by calling the NSW RFS Bush Fire Information Line on 1800 679 737.

For information on road closures, check www.livetraffic.rta.nsw.gov.au. Roads may be closed without warning.

January was the hottest month on record for Sydney since 1859. A number of areas in the state, including Moree and Walgett, have experienced a significant number of consecutive days over 35 degrees and will come close to the record of 50 hot days in a row.

Fire and Rescue NSW stresses that a total fire ban is in place in NSW this weekend due to worsening fire weather conditions.

“Dangerous fire conditions are being experienced across NSW. This is due to high temperatures, strong winds and low humidity,” a FRNSW statement said.

“On Sunday, the conditions will worsen with large areas of NSW experiencing severe and extreme fire danger.

“Telephone warning messages have been sent to homes and mobile telephones in the areas affected by catastrophic fire danger. Residents may receive the message more than once if you are the affected area.”

Total fire ban in force across NSW this weekend