AFL Sydney Swans stars George Hewett and Shaun Edwards are living proof that hard work, dedication and passion will take a person anywhere – regardless of background, creed or colour.

And they were in Moree on Tuesday advising local youth – as well as players, coaches and supporters of the town’s regional AFL club The Suns – that anything is possible if a heads-down, bums-up approach is taken.

Edwards grew up in an Aboriginal community in the Northern Territory and Hewett is from a small farming community in South Australia, and now both are travelling to bush centres as part of the Australia Post AFL Community Camps program.

He is a versatile, fast-paced forward with 24 games’ experience at AFL level.

He said the aim of the program was not only to promote the code, but to inspire kids from all backgrounds and to encourage them not to be afraid to dream too big.

“Every year the Sydney Swans get out in the community to regional areas of NSW and try to grow the game and inspire the kids,” Edwards said.

“Obviously, Moree has heavy rugby league and rugby union backgrounds, but as AFL players we like to get out in the community and show our faces, and promote the game,” he said.

Hewett debuted as half-forward for the Swans last season after being recruited from North Adelaide. From 24 games he kicked 18 goals and is well-regarded for his tackling pressure and finishing skills.

He grew up in Port Broughton – a town with just 1500 residents – in South Australia, and says keeping goals and dreams alive is important.

“I’m a kid from a small country town in South Australia, and now I’m here in Moree teaching kids how to play footy,” he said.

And it’s not just the kids he and Edwards aim to inspire, but fledgling Moree club The Suns. 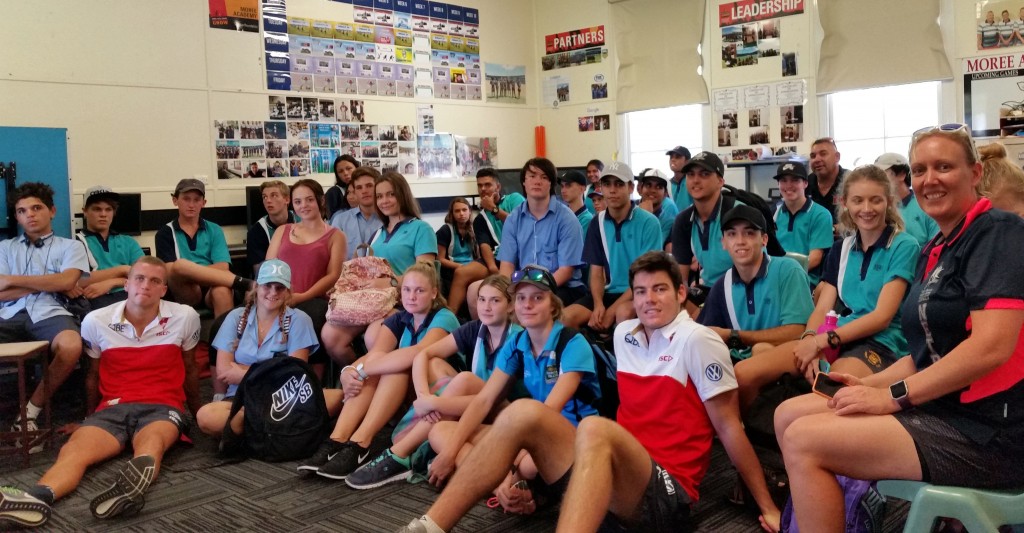 “My advice is to get out there and enjoy the game and to keep practicing – it can seriously take you places,” Hewett said.

“If they keep that group together and if they keep winning, things will happen for them,” Hewett said.

“If those kids from last year come up through the ranks there will be nothing but positives – if they keep practicing and keep sticking to it,” he said.

Hewett and Edwards on Monday attended a gathering at Moree Plains Shire Council chamber to meet-and-greet members of the community as well as civic leaders.

After Monday’s whistle-stop they travelled to Narrabri to host Narrabri Eagles at a training session for players of all ages.

They returned to Moree on Tuesday via Bellata Public School, where they attended the school assembly – all 21 kids and one teacher – and also hosted an AFL clinic.

“We had a great dinner at Narrabri and we called in to see the kids at Bellata – they are the sort of places that we want to see the most, because it’s pretty intriguing,” Hewett said.

“There’s only one teacher so it was an eye-opener, but very good to see and to be a part of it.

“But the whole trip has been really good. We can’t fault the hospitality; everyone has been super-nice – Shaun and I have had a blast,” he said.

The busy schedule on Tuesday also took in both Moree Secondary College campuses – Albert Street and Carol Avenue – as well as junior and senior clinics at Taylor Oval, where the thermometer nudged 42 degrees.

“I’m from the Northern Territory, so I’m pretty much used to this sort of weather,” Edwards smiled.

The Suns club president Tina Macey, who was instrumental in putting the entire tour together, said having Edwards and Hewitt in the north-west for two days was a boon for the code.

“Just having the boys here for a couple of days will help boost numbers for The Suns, and also boost commitment for the club,” Macey said.

“Hopefully we can get volunteers’ numbers up. There are a lot of older Moree residents who used to play a few years back and now that the game is back in town a lot of those people who were involved back then are returning as volunteers and sponsors.

“For us to have Shaun and George here for the first time ever – I don’t think we’ve ever had anyone from the AFL in Moree – is amazing, and hopefully we can grow the game a little bit bigger out here,” she said.

“And not just in Moree either, but places like Mungindi, Walgett and Brewarrina.

“Goondiwindi has got a really strong team and so has Narrabri but we want to involve all those little places that get forgotten,” she said.

“Seriously, we have some super-awesome talent and hopefully that means that George and Shaun can inspire some of the young ones to strive for the bigger things.

“They definitely are two guys that have really shown their talent and shown the kids in Moree that they can actually do it and get there – the kids just have to put all their effort into it,” she said.

The local season starts on April 1, with the Suns travelling to Inverell to take on the Saints.

The Suns then play the first of eight home games the following Saturday when they host Tamworth Kangaroos at Taylor Oval.

Next post
Jab program to protect NSW teens from meningococcal