DOWN by the banks of the Macintyre River at Boggabilla, an entirely new kind of cash crop has taken root – with a small scale solar setup now harvesting the sun’s rays.

“This is a fantastic example of how solar can be effectively executed on a small scale, harnessing local knowledge and a small amount of land,” Mr Marshall said.

“From just four hectares of dirt, this solar farm can power almost 1,350 homes at peak efficiency, providing power for Boggabilla nearly seven times over, while preventing thousands of tonnes of carbon dioxide from entering the atmosphere.

“Five-million dollars of private funding has created the 3.6 megawatt array, with the promise of a reasonable return on investment. The facility provides a compelling blueprint for further investment of small-scale renewable development in communities across the Northern Tablelands.” 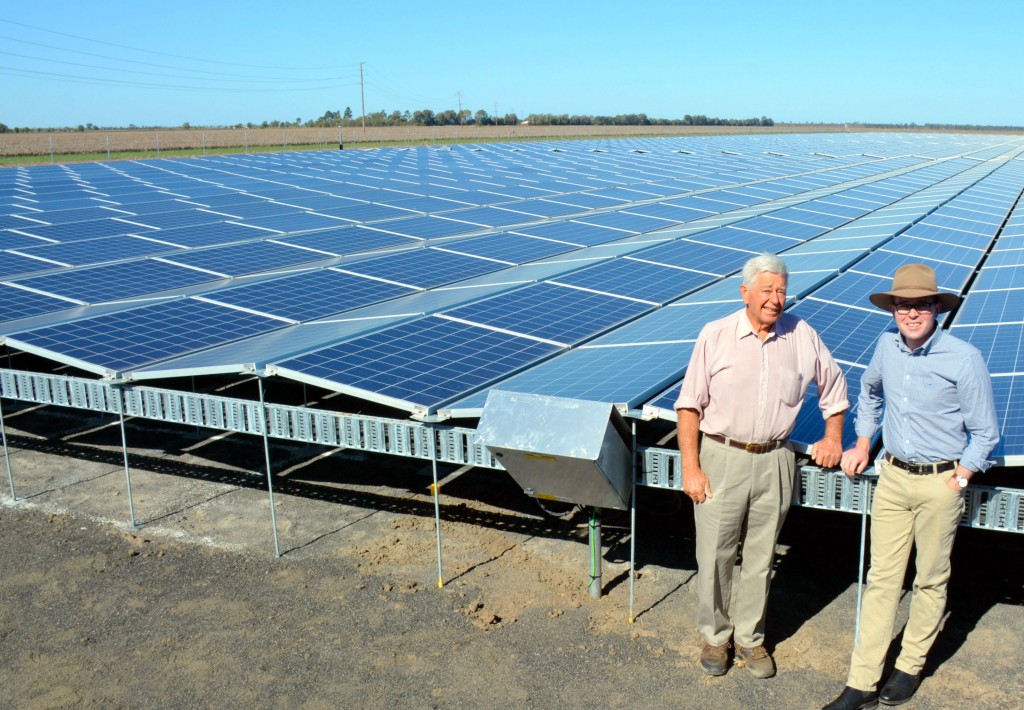 The solar farm comprises of 16,000 photovoltaic panels, with four inverters and two on-site substations. The required land was subdivided, with agricultural activities unaffected on the other side of the fence.

In addition to finding land and financially driving the development, the photovoltaic panels were accurately aligned for peak efficiency thanks to agricultural technology the Mailler’s themselves created.

“I commend the Maillers, who have driven this development and Yellow Dot, who plan on rolling out similar installations across the country.”

“While the proponents will make good money feeding back into the grid, it’s at a fraction of what the power company will make selling to customers just a few kilometres away,” Mr Marshall said.

“The recent IPART determination to double solar feed-in tariffs will help in some instances, particularly with smaller operations, but a peer to peer trading scheme will provide extra options and boost the renewables market.

“By allowing locals to sell power directly to each other – mum and dad power producers will see a better return on their investment, and enhanced competition will drive down power prices.

“I’d like to see this revolutionary pricing scheme trialled in the Northern Tablelands – further solidifying our patch as a national leader in renewables.”