Strike Force SASSAFRA is an operation by officers attached to Barwon Local Area Command targeting the ongoing supply of illicit drugs in the Moree region.

The 19-year-old Gravesend man has been charged with ongoing supply of prohibited drug and participate in criminal group.

He was granted conditional bail until an appearance at Moree Local Court on February 27, 2017.

Officers have also seized a seventh vehicle in relation to their investigation which is ongoing.

The arrest comes on the back of a huge drug bust at Ashley on Tuesday.

If members of the public have any information into the supply of drugs in the community, they are urged to contact Crime Stoppers.

Click this link for NSW Police media statement regarding arrest made at Ashley: http://deluxecafemoree.com.au/updated-ice-worth-more-than-700000-seized-in-ashley-and-moree-raids-3/ 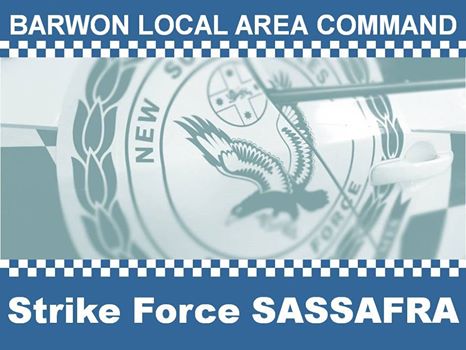 Police are also urging anyone with information in relation to this incident to call Crime Stoppers on 1800 333 000 or use the Crime Stoppers online reporting page www.nsw.crimestoppers.com.au.

Meanwhile, police are searching for two women after a couple were injured during a robbery at Tamworth on Friday night.

At about 7pm, two women it is alleged that women attended a home in Tingira Street where they spoke to a 38-year-old female occupant of the home.

When the occupant entered the home the two women followed, punching her to the head.

The injured woman called for help and a 44-year-old male resident of the home came to her assistance.

When the man saw the offenders were armed with a hammer and a machete, he armed himself with a sword and a scuffle ensued.

The man was struck to the left hand which caused a severe laceration but he was able to run from the home and seek assistance.

The two offenders armed themselves with other swords from the home, took cash and personal papers before leaving on foot towards Cole Road.

The man was treated at the scene and conveyed to Tamworth Hospital before he was transferred to John Hunter Hospital for surgery.

The woman did not require further treatment.

Police have appealed for anyone with information about the incident to contact Crime Stoppers.

Next post
“You just won’t find a better bloke”: Stan Jurd just one of many to farewell legend Bernie Briggs