Tapakeg joined Mulgate (1961) and Gefilte (1988) as just the third horse in 85 years to win all three cups on bush racing’s Golden Triangle at Moree, Mallawa and Garah when Batemans Bay hoop Tim Phillips guided the gelding to a soft win.

Sinclair and Phillips completely dominated the 2014 Golden Triangle, teaming up to win eight times on the 18-race, three-meeting circuit – and they did it with just three horses.

Airborne: Tapakeg in full flight as he races away from Playa (widest runner) to rewrite Golden Triangle history.

While Tapakeg was rewriting bush-racing history, Dungiven gave notice that he just might be a Golden Triangle cups’ candidate next year by effortlessly winning class Bs at all three meetings.

Rasanka, after a luckless third at Moree, made amends with all-the-way wins at Mallawa and Talmoi but it was Tapakeg’s coveted treble that will be talked about for years to come.

The gelding, owned in Sydney by Dominic Neate and Pat Galvin, won easily at Moree and Mallawa before saving the best for last at Talmoi in front of a huge crowd.

“You could say that Talmoi was the easiest of his three wins but all the wins have been different, because of the way the races have panned out,” Sinclair said. 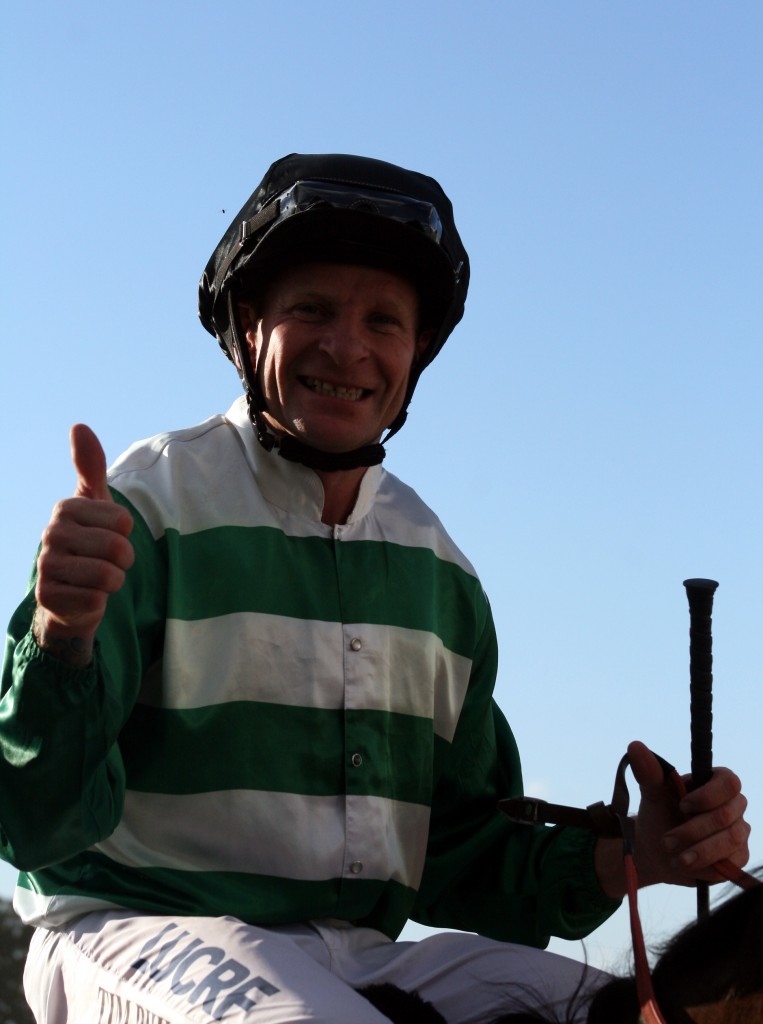 Thumbs-up: Tim Phillips brings Tapakeg back to scale after winning the Talmoi Cup on Saturday.

Phillips parked Tapakeg (6-4 on fav) just off the speed before darting through along the fence when the field straightened up to race clear under 72kg and score by nearly three lengths from Playa (9-4) with A Long Way (6-1) a length-and-a-quarter away third.

“They clapped on a little bit of pace so I just sat off them, and when a couple of them (Segovian and A Long Way) took off on the turn and went a little bit wide, I rode him for a bit of luck and got the kick up along the fence,” Phillips beamed.

“When they get up over the 70kg-mark they can get a little flat-footed, but he’s got a 200-metre sprint and can put a gap in them.”

For the connections of runner-up Playa, it was a case of “right horse-wrong year” after chasing home Tapakeg at all three legs of the Golden Triangle.

“I’m a bit disappointed that I had to beat Nathan,” Sinclair said.

“Playa ran out of his comfort zone (at Talmoi), but raced really well.”

Blewitt, who had Playa parked much closer than usual on Saturday, argued that the Talmoi result may have been closer had Tapakeg not gained a saloon passage at the top of the straight.

“If Tim had had to go around them instead of saving ground on the inside, we might just have made the finish a bit interesting,” Blewitt said.

Next post
Tapakeg’s Sydney owners love bush racing, preferring to soak up Talmoi rather than Randwick