IT’S a moniker that doesn’t sit too well with Peter Sinclair but he was officially crowned King of the Picnics on Saturday after leading back an historic quartet of winners at round one of bush racing’s Golden Triangle at Moree.

After winning earlier races with Marine Corps, California Raider and I Am Dynamic, Sinclair’s coronation was complete when Track Flash and jockey Ricky Blewitt collected the time-honoured Boolooroo Cup for the second time in as many years – and Sinclair’s 12th in 23 years.

“I don’t mind being called the King of the Picnics in one way, but I’d rather be called King of Randwick,” Sinclair laughed. 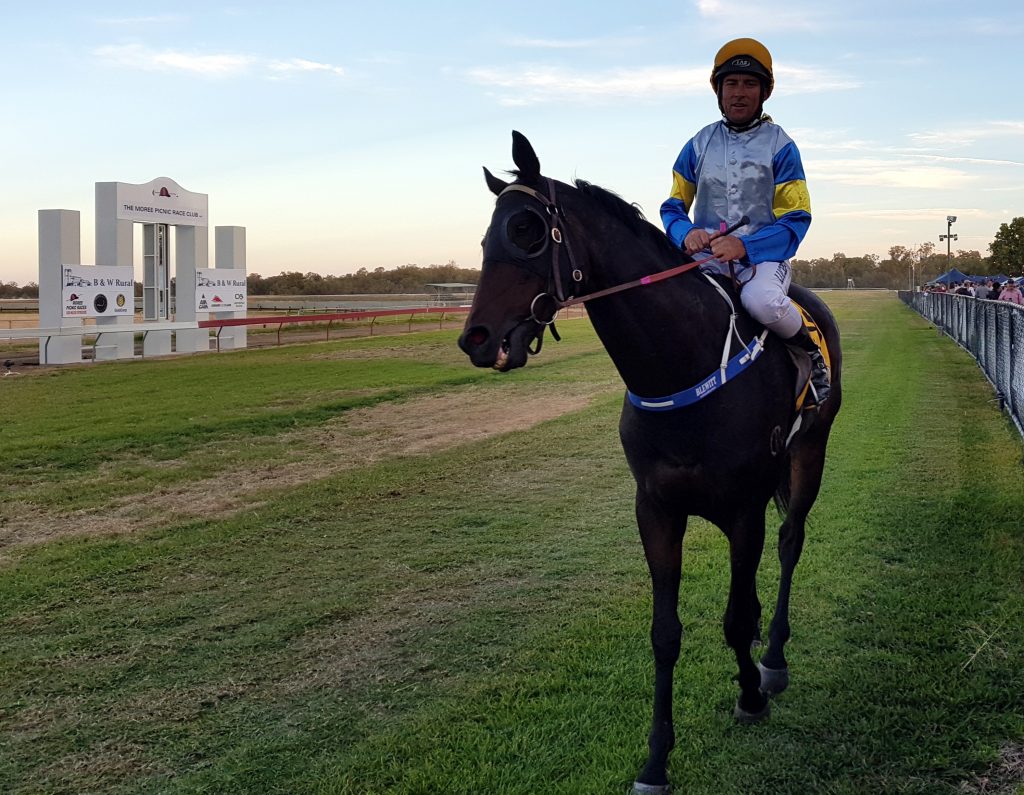 “Track Flash is a really good horse and is very close to my heart,” Sinclair said.

“Darren Jones and myself always thought that he would turn out a good horse, so every time he wins a race it’s a little bit emotional. 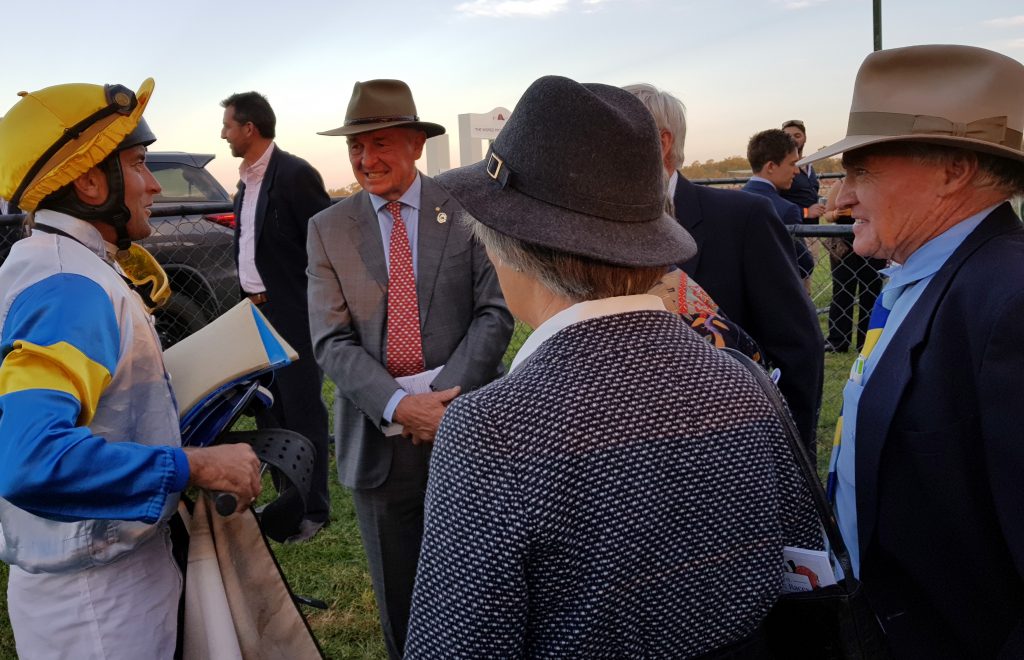 “And Ricky (Blewitt) really likes the horse too – he has always had a soft spot for him. From memory, Ricky has now won six or seven races on Track Flash as well as the Boolooroo Cup last year, and it’s pretty hard to back up for consecutive wins,” he said.

Blewitt had Track Flash (5-4fav) – a noted back-marker – much closer to the speed on Saturday.

The six-year-old raced away in the straight to beat Campbell Roberts’ luckless mare Mysticism (10-1) by more than a length with Deceitful Don (13-4), trained by Sinclair’s son Nathan, three lengths away third.

“Last year the track was wet and I asked Pete if he minded if I came down the outside and he said that if I did he wanted to see me right on the outside fence,” Blewitt said.

“He reckoned that if I had got beaten (last year) I’d look like the mug because he said he wouldn’t tell anyone that he gave me those instructions,” he chuckled.

“But he was up a lot handier this time around. He got back at Quambone last start (when a dead-heat cup winner) but he’s not the same sort of horse on dirt – he doesn’t seem to travel as good. He’ll get through it but not as good as he does on turf. 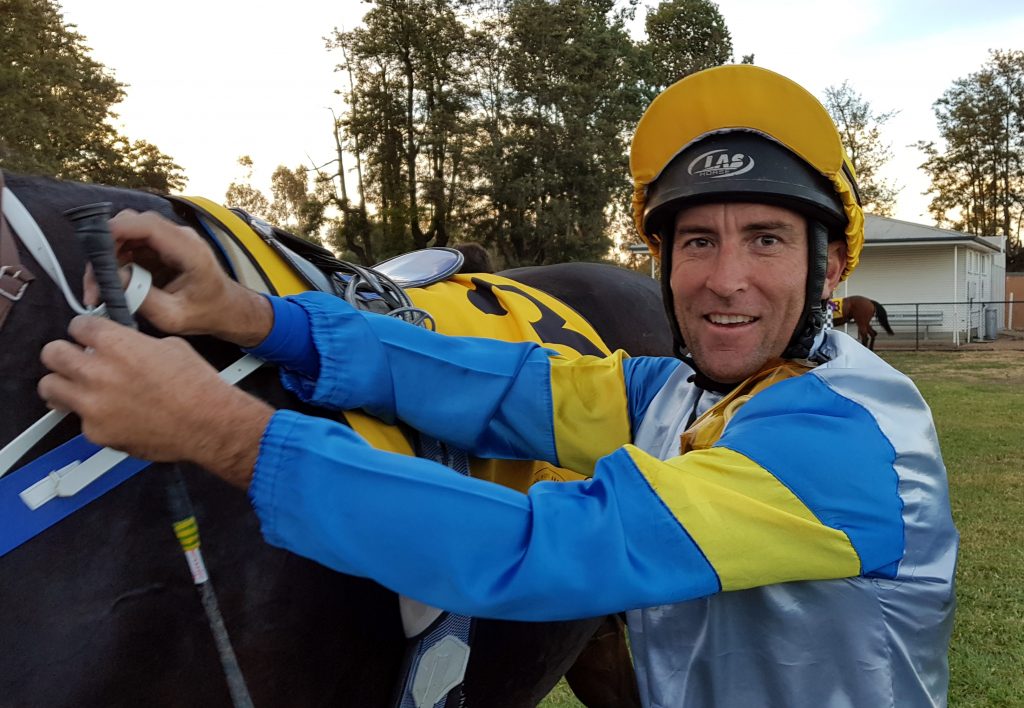 “It was a really nice win today,” he said.

“Track Flash was just too good for us on the day (this year),” Campbell Roberts said.

“I was pretty confident that she would be up there and was a bit surprised because I thought that she might have been stopping the last 50 metres, but she was picking up the winner on the line.”

Sinclair’s golden day at round one of bush racing’s Golden Triangle began when Marine Corps (2-1fav) won the 950m Graincorp Class B Handicap by the barest of margins .

The win was also special for the Sinclair family – Marine Corps was a Mothers’ Day present for the trainer’s wife, Jenny.

“I didn’t pay much money for him and told Jenny it was her Mothers’ Day present. All she could say was that the horse was very unattractive, but I imagine the winning cheque wasn’t,” Sinclair laughed. 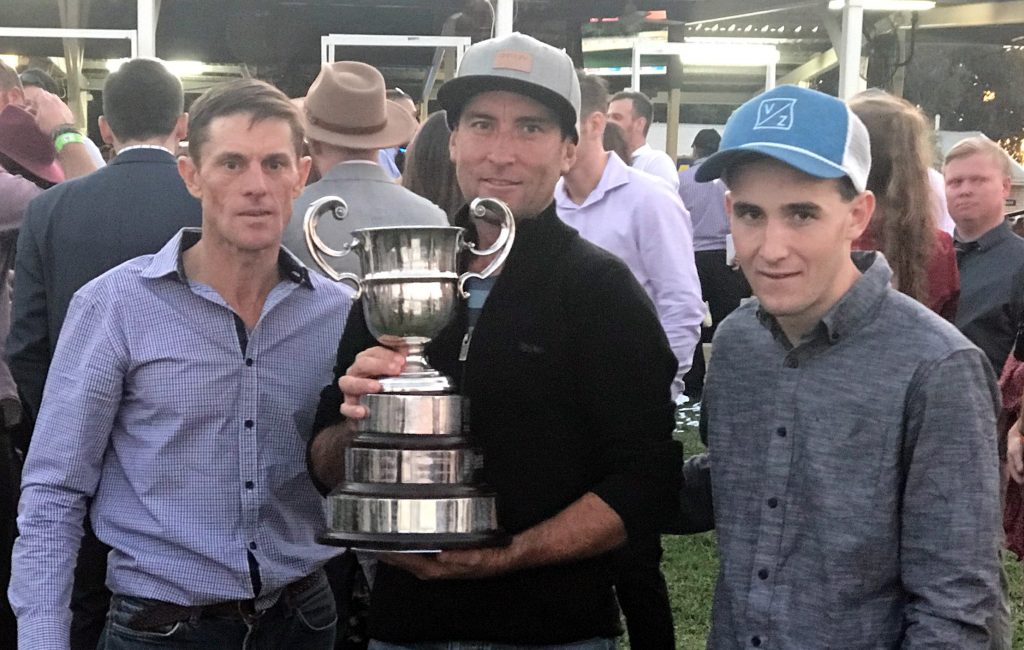 Ricky Blewitt (centre) with the time-honoured Boolooroo Cup won by Track Flash for the second time in as many years. Blewitt is flanked by fellow riders Scott Sweedman (left) and Ridge Wilson (Image courtesy of Greg Kachel).

Emotions also ran high when I Am Dynamic, owned by Moree racecourse track manager John Brown, charged home late to win the 950m Chesterfield Australia Bracelet – Sinclair’s third win in the race in four years after saluting with Booked Out (2015) and Cool Rules in 2016.

“I Am Dynamic is a good horse,” Sinclair said.

“We sourced him for Brownie’s son, John Brown Junior, who had cancer and sadly passed away.

“Brownie and I decided to race the horse and most people don’t realise the silks he carries are a spin-off from the colours worn by Buffering, John Junior’s favourite horse.

“We’ve got a soft spot for I Am Dynamic and the horse has been really good to us,” Sinclair said.

Blewitt said I Am Dynamic is “a nice horse going forward”.

“That was a real good win, but he’s a bit lazy,” Blewitt said.

“I had to get stuck into him at the start and put two around his butt – Pete said the horse would switch off if I let him.

“He tacked on to them at about the 500m and when he hit the front he wanted to switch off again, but he’s a nice horse going forward,” Blewitt said.

California Raider (6-4fav) made up many lengths in the straight to wear down leader Bulbadah and win the 1200m Kenway and Clark Class 3 Handicap by a long-neck.

“It was a pretty good win and the further he goes the better he’ll be – and when he does get over more ground he’ll be closer to them,” Blewitt said.

“The leader was about five lengths in front of me coming around the turn but California Raider really knuckled down in the last 100m.

“It was a really nice win and he attacks the line really good, which is what you want,” he said.