SARGENT Doakes made it two wins from two starts at Tamworth when he arrived wide and late to win the $30,000 Brett Clarke Music Tamworth Summer Showcase Sprint (1000m) yesterday.

The Rod Northam-trained gelding notched win number six in 18 starts when surged late to beat Capitano (Jacob Perrett) by three quarters of a length with the Sue Grills-trained Hammoon Boy a head away third.

“I didn’t mean to go as wide as I did but in the end it was a lot better out there.”Rachel Northam, ex-wife of trainer Rod, was in charge of the stables horses yesterday and she was thrilled the four-year-old gelding son of I Am Invincible had won again after a successful debut at Tamworth three starts back.

“Leanne got him to the right part of the track.

“She knows him inside out, rides him work every morning.

“And he’s such an honest little horse.”

Rod Northam was delighted too.

He’d asked Leanne Henry to “jump travel and get wide” and she followed that perfectly.

“He’s been a good horse for us, won the scone 2YO and then the Grafton 2YO.

“A super little horse who ran third in the Country Championships last year.”

He will keep Sargeant Doakes “fresh” and look for more sprint races over similar distances at this stage.

Wetter the better for Lukey

LUKEY loves the wet and delighted in the afternoon storms that changed yesterday’s Tamworth track from a Good 4 to Soft 7 as he ploughed his way to a fourth career win in the $30,000 Hurricane Fall Country Music Cup Class 3 Showcase Handicap (1400m).

Trained at Dubbo by Dar Lunn the six-year-old gelding son of Arena swamped his rivals setting up a two and three quarter length win over Justin Stanley’s Coming In Hot with Troy O’Neile’s Bianbitten a fighting half-length third.

Anthony “Choc” Cavallo had his first ride on Lukey and was suitably impressed.

“We went a bit wide looking for the best part of the going,” Cavallo said.

“He travelled sweet and i didn’t have to hit him with the whip. I could feel him let down well.” 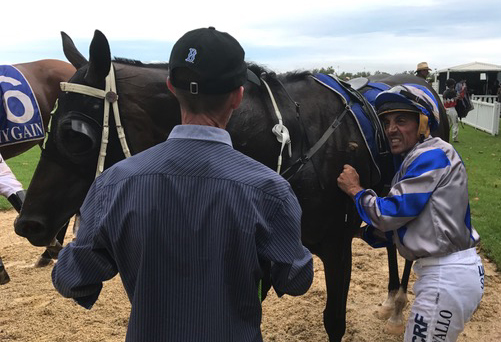 Dar Lunn knew Lukey would be a contender as soon as the storms hit.

“He likes the going,” he said.

“And he’s had no luck in all his recent runs. I just told Choc to ride him positive, I knew he was going to be hard to beat. He’s a horse who has been running real good races but with no luck.”

He doesn’t have a race in mind but will return and look for a race.

OUR Minaan romped to victory in the Amber Lawrence Happy Ever After BM-55 Showcase Handicap (1600m) at Tamworth, revelling in the stormy and wet conditions.

Third in last week’s Glen Innes Cup the Paddy Cunningham-trained grey mare gave nothing else a chance when jockey Terry Treichel hit the go button about 500m from home.

The seven-year-old, winner of three of her previous 31 starts, streaked to a four-and-a-half length win from Bonnie Sare with Cool Prince three-quarters of a length away third.

Paddy Cunningham said there was no pre-conceived plan to go early approaching the turn after Treichel made a lightning move to set up a winning advantage rounding the turn.

“I just leave it to the jockey,” the former jockey said.

“Her run at Glen was real good but she’s a better miler (than the 1400m of the Glen Cup). And with the sting out of the ground she’s an even better horse.”

Just where she goes now though is Cunningham’s only problem.

He could only shrug about finding a run for her as he celebrated a race to race double with Tan Tat Nova and Our Minaan.

VALBEATA  might have earned herself a crack at Taree heat of the Country Championships after a devastating finish win the $30,000 Two Gals Class 1 Showcase Handicap (1200m).

The Bob Milligan-trained filly was having her sixth start today and motored home brilliantly for Baker on a Heavy 8 track.

Glenn Milligan, son of the trainer, was in charge of the stables runners and delighted with a race-win they thought she was quite up to.

“If she keeps improving she might get a crack at the Country Championship heat at home (Taree). Chloe rode her very well too. But this little filly has done everything we’ve asked her to do and just keeps getting better and better.

“We can’t believe she didn’t win a race in her first prep. In her first three starts she did a lot of things wrong.”

Two winners for Milligan and Baker

Hesco Gold arrived wide to notch a one and quarter length win from the Scott Thompson-trained So You Know. Allan Kehoe’s Three Hats was two lengths away third.

Baker had partnered brilliant filly Valbeata to victory a few races earlier in the program and produced a similar wide ranging run to win aboard the five-year-old daughter of Eavesdropper.

“We didn’t think she’d handle it,” Chloe baker said of the heavy conditions.

“But she was travelling on the corner. She just let down and loved it.”

Glen Milligan, son of trainer Bob Milligan, had thought about scratching the mare after two storms broke across the track mid afternoon.

“I was half thinking about scratching her, she’d never done anything on a wet track,” he said.

“But we decided to run her.”

The surprise handling was a happy surprise.

For Glen Milligan the trip home to Taree would be a late homecoming before heading to work in the morning and then heading to Dubbo tomorrow afternoon for the Dubbo Yearling sale.

The Milligans have 10 in work at the moment after culling 16 in recent weeks.

They have been hit by the regular arrival of more provincial stables such as the Perry, Lees and Denham establishments making it harder for the locals to compete.

Hence a move to clear out and look for new and young horses through the sales.