IT started out like an Aussie remake of Cool Runnings – only on water, not ice – but ended with a slightly different result.

However it was a result for the ages, and one that will have Moree’s Jock Gartshore and Sam Tapscott back in Renmark, South Australia next year for another crack at the Red Bull Riverland Dinghy Derby.

And if it wasn’t for bad luck in running and mechanical problems, their 10-foot tinnie Plan A would’ve finished much closer than 26th in the novice class today (Sunday, February 5).

But rest assured that the experience was enough to have the Moree pair keen for a rematch.

Plan A was behind quite a few boats when Sam and Jock crossed the line in 2hr:04min:04sec, a tick over 30 minutes slower than winners Peter Karayannis and Nick Efthimiou (1hr:33min:10.8sec). 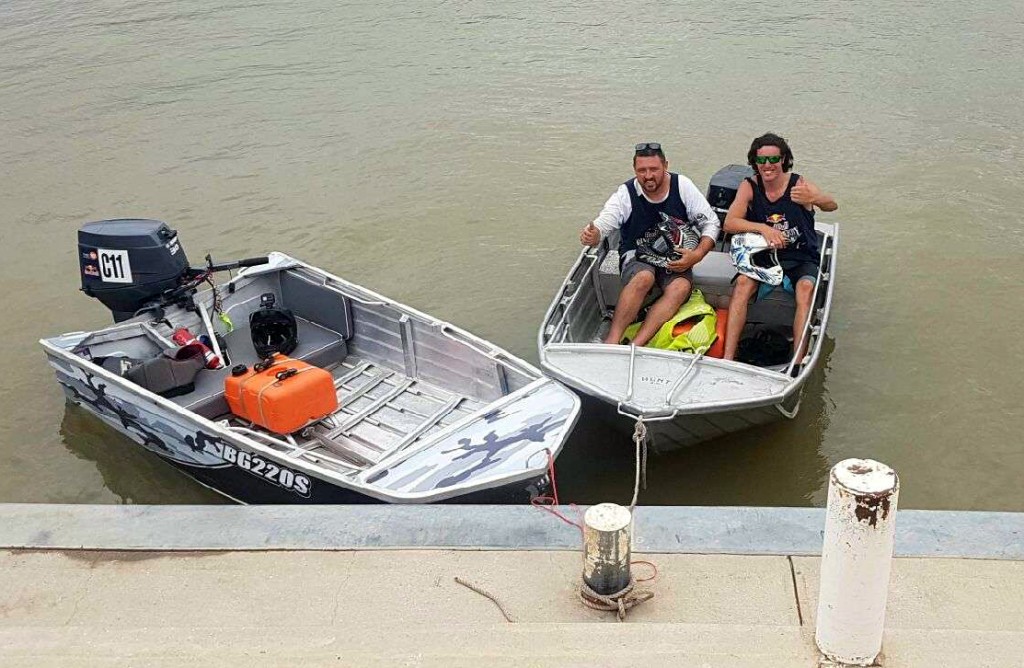 Sam Tapscott and Jock Gartshore will be back at Renmark this time next year, with a better boat and a bit of valuable local knowledge (Images Supplied).

But it was a time that should’ve been much quicker.

Jock said he and Sam had achieved all they had set out to do – and maybe a bit more.

“We survived; we made it to the finish, and that was pretty much all we were hoping for,” Jock said.

“We finished ahead of a few other boats and that’s a bonus, I suppose.

“After seeing what we were up against this year and after learning as much as we did, I think we’ll have to go with a whole new set-up next year,” he said.

Sam explained that if it wasn’t for bad luck, Plan A would’ve finished much closer.

“We had a fair bit of trouble,” Sam said.

“We bent the prop on the first lap around and we had nothing in the boat to straighten it out with. “The motor was propped up out the back and we belted the shit out of the prop with the fire extinguisher – it’s the only thing we had on board that we could use,” he laughed.

“We got going again once we fixed it, but then the fuel tank breather wound itself back in with the vibration of the boat – the motor conked out twice.

“We would’ve finished a bit closer if we didn’t have all the mechanical dramas.

“But we made up a bit of time after that because that all happened in the first lap. We passed a lot of boats that had gone up banks or into trees – there were half-a-dozen or so that didn’t finish the race.

“It’s been a wild ride, I know that, but we’ll be back next year for sure,” he smiled. 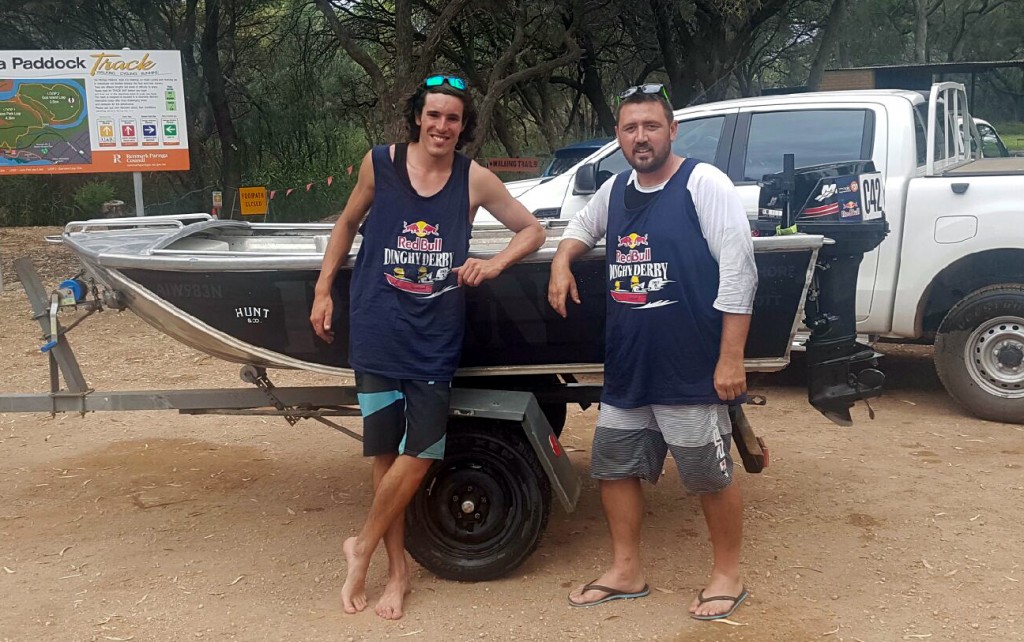 Jock said a trip back to the drawing board was needed, and next year they’ll be equipped with a better design and a bit of valuable local knowledge.

“We’ll keep our motor – I think it’ll be all right – but the hull shape on our boat is just all wrong,” Jock said.

“Ours is a bit of a V-bottom where most of the boats here are more flat-bottomed. That allows them to turn a lot easier and a lot tighter, whereas ours is a lot harder to turn.

“We’ll look at a new hull and get a bit more practice in – we’ll definitely be back next year.

“It was great experience, and it was great to be a part of it,” he said.

Click this link to read about how the boys devised the plan to head to Renmark to compete in one of the craziest races ever: http://deluxecafemoree.com.au/moree-lads-prepare-to-launch-for-madcap-boat-race-in-south-australia/

Click this link to read about how Sam and Jock fared in the Dash for Cash on Friday night: