TRAINER Geoff O’Brien’s decision to bypass his hometown meeting at Quirindi on Saturday and instead take on Track Flash in the Talmoi Cup paid blue-chip dividends when Rena’s Lad coasted to an easy win at round three of bush racing’s Golden Triangle.

Track Flash was endeavouring to become just the fourth horse in Golden Triangle history to win all three cups in the one season at Moree, Mallawa and Talmoi.

But just as Track Flash began to motor home down the short Talmoi straight, Rena’s Lad and jockey Michael Gray had raced to an unassailable lead.

“We were going to start at home (Quirindi) in the Willow Tree Cup but they gave us barrier 13 and 62.kg so we thought we would be better off coming to Talmoi where we might have some sort of chance,” O’Brien said.

“On his Mallawa run (when second to Track Flash) we had to be chance and I did say to a couple of the part-owners a few weeks ago that we’d be a big chance at Talmoi because of the little track and shorter straight.

“As it worked out, Michael has given the horse a perfect ride and he’s got the bikkies – everyone’s happy,” O’Brien smiled. 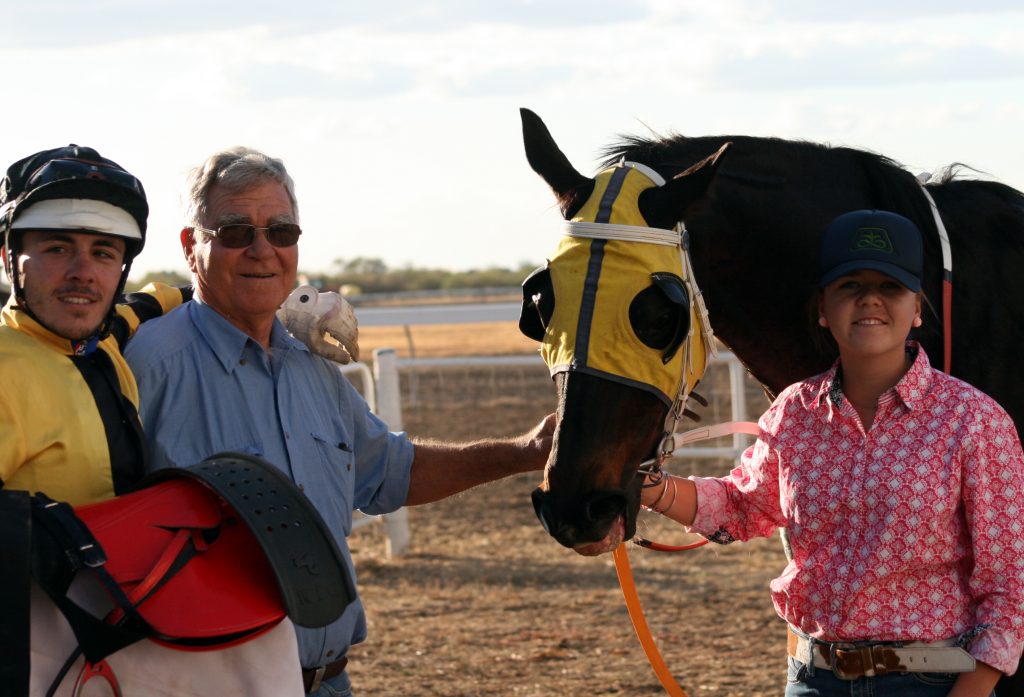 Gray, who plans to join the professional riding ranks later this year, parked Rena’s Lad off the speed before dashing to the front halfway down the short Talmoi straight.

Rena’s Lad (5-1) charged to the line four lengths clear of early leader Deceitful Don (6-1) with 7/4-on favourite Track Flash rattling home to grab third, three-parts of a length away.

“I decided to stay out wide a little bit because they were all just hammering on the inside, so I just waited,” Gray said.

“When Ash Boyd (on Mysticism) went forward I just sat behind him and started going for my horse at about the 600m.

“To be honest, I thought I might’ve gone a little bit too early,” he said.

“At Mallawa (when second to Track Flash) the straight is a bit longer but this track really suited him.

“I’m very happy to win for Geoff, too. He’s a good bloke and has looked after me. He deserves a win like this,” Gray said.

Gray will later this year sign up as an apprentice on the professional circuit with Narromine trainer Kylie Kennedy.

“I’ll wait until after the Picnic Championships (at Dubbo in September). Riding professionally is something I definitely want to do,” he said.

Gray, who won the Birkalla Bracelet Collaroy Cup on Yes Zariz at Mudgee picnics the previous week as well as the Tullibigeal Picnic Cup on Dream on Stan in late March, said he’ll have no trouble shedding the kilos when he joins the professional ranks.

“At the moment I sit around the 58-60kg mark but could easily get the weight off because it’s something I don’t work on – I turn up to the races ‘as is’, so to speak,” Gray said.

For the connections of Moree-trained gelding Track Flash, an historic win on the Golden Triangle was not to be.

Track Flash, shouldered with 67.5kg at Talmoi, was attempting to become just the fourth horse after Mulgate (1961), Gefilte (1988) and Tapakeg (2014) to win all three cups on the Golden Triangle since Mallawa joined the circuit in 1930.

Part-owner David Hunter said Track Flash gave his all under a big weight and bad barrier (seven out of seven).

“Two out of three isn’t bad and there is always next year,” Hunter smiled.

“It was disappointing but history says it’s hard to do.

“All three tracks (Moree, Mallawa and Talmoi) are all very different and when you get to Talmoi with the extra weight that makes it more difficult.

“He seemed to miss the start a little bit today and got a long way back, and carrying the extra weight – 2kg more than Mallawa – slowed him down a bit as well.

“It’s only been done three times before so it’s not an easy thing to do, but we’ll try again next year,” he said.

TODD Payne is a firm believer that good luck comes in lots of three.

And it’s an adage that rang true not once but twice for the young Inverell trainer at Talmoi picnic races on Saturday when Victory Lass collared the 1000m Helen Boland Memorial Bracelet for the third time in as many years – the first horse to achieve a treble of Talmoi Bracelets since racing first began at the Garah racecourse 107 years ago.

And not only did Victory Lass rewrite Golden Triangle history on Saturday, the tough, at-times cantankerous little mare also supplied the last leg of a winning treble for Payne and Hunter jockey Ashley Boyd, who teamed up earlier in the day to win with Yes Oui Si and Newcastle Dancer.