AFTER an incredibly successful two-week run, stage production The Red Barn closed the curtain to a standing ovation last night at the Moree Uniting Church Hall.

The two-act melodrama, written by Brian J Burton in 1963 and based on a true story from the early 1800s, centres on the death of naive young heroine Maria Marten and the eventual undoing of her murderer, the evil cad-about-town William Corder.

Merri-May Gill absolutely shone as the doomed heroine while Joey Dixon had the audience spell-bound – and booing and hissing wildly – by his wicked skulduggery and egotistical, devil-may-care attitude. 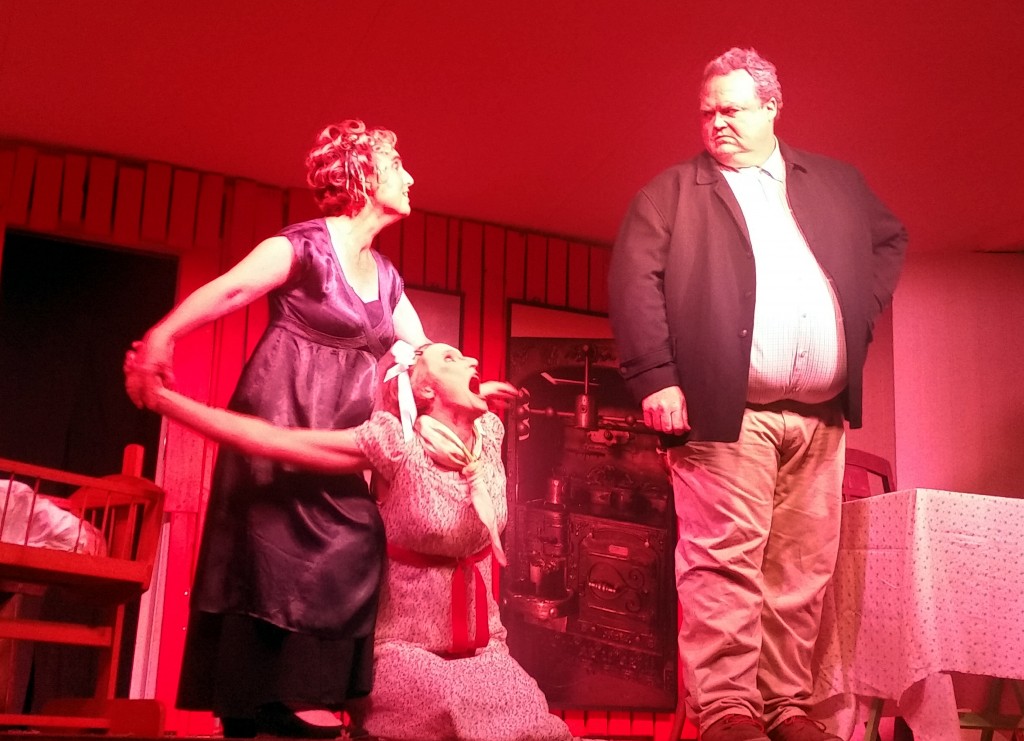 David Watts, a first-timer in front of the footlights, played Maria’s father like a veteran while Kate Brennan gave her all as Maria’s doting mother.

Tim Barclay never missed a beat – well, one – as Tim Bobbin, the cowardly village idiot whose self-proclaimed wisdom and simple, yet refreshing, outlook on life was unsurpassed.

Greg Fisher’s between-the-scenes antics as the sexy maid had the audience in stitches. He worked the room with a blend of slapstick, whimsy and good old-fashioned beer hall cabaret, while all the time encouraging crowd participation.

Singling out audience members to participate in embarrassing scene-stealing moments was a show on its own, not just a support act.

Ms Drenkhahn, who also played Nell Hatfield, a manipulative gypsy woman out for revenge against William Corder and his family, said The Red Barn’s entire cast and crew absolutely excelled.

“It has been an amazing experience to work with such a talented group of local people,” she said. 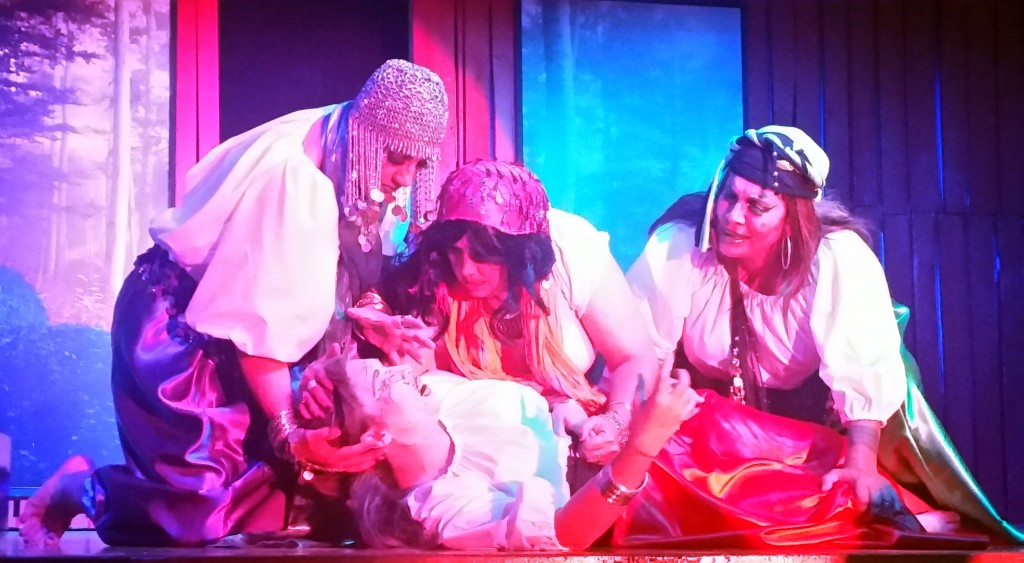 The murder of gypsy woman Nell Hatfield led to the downfall of the evil squire William Corder.

“All of the cast and crew have worked so very hard together on this production for six months, and I am so pleased to say that all our hard work has paid off.

“We have put together an amazing work of musical theatre that is of high quality and I wish to thank the Moree community for their support as well as our sponsors – putting a show of this magnitude together would not have been possible without the support given,” she said.

“I feel that theatre as an art form is so important, and I am proud to have been able to provide local people with the opportunity to not only perform, but to also appreciate drama in our local area.

“The cast and crew have completely loved being a part of this project and over the past few months we have become a little thespian family – I am delighted to say that the Moree community can expect great things from MACT in the near future,” Stevie said.

It seems that larger-than-life local David Watts – a newcomer to the world of theatre – has found his calling, wowing the audience with a stunning debut performance.

He said The Red Barn had been an “amazing experience”.

“It is a rewarding feeling knowing that all the hard work put in for many months has paid off,” he said. 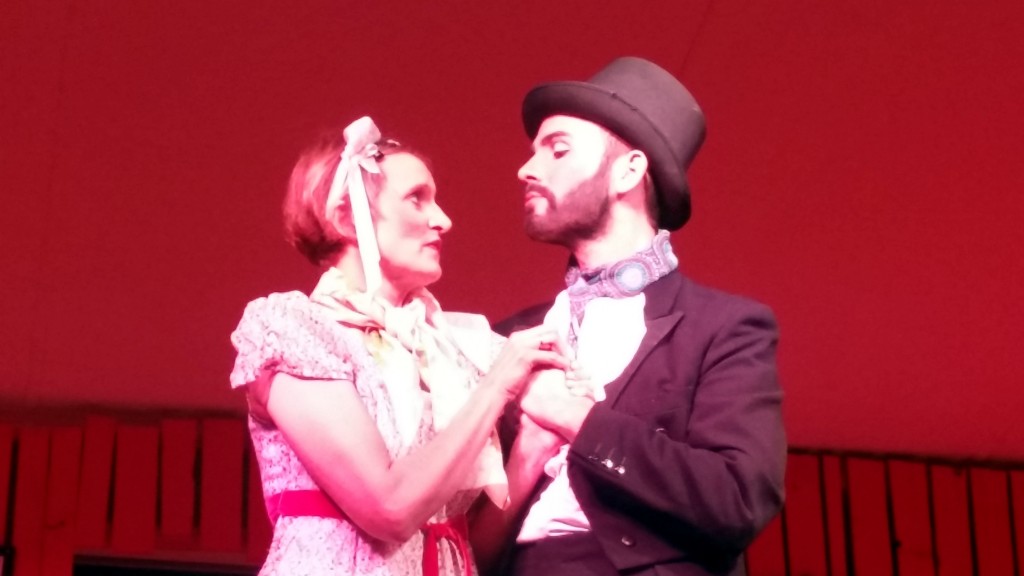 “Closing the doors for the final night left all the cast pondering what to do next with our lives – there is already talk of what the next show will be next year.

“Moree has so much hidden talent and to work alongside people with such dedication only makes your job easier,” he said.

“To see the audience enjoying what they saw is so rewarding. The whole production, and to be able to sell out five shows, would not have been possible without the support of the town, its people and all the generous sponsors. 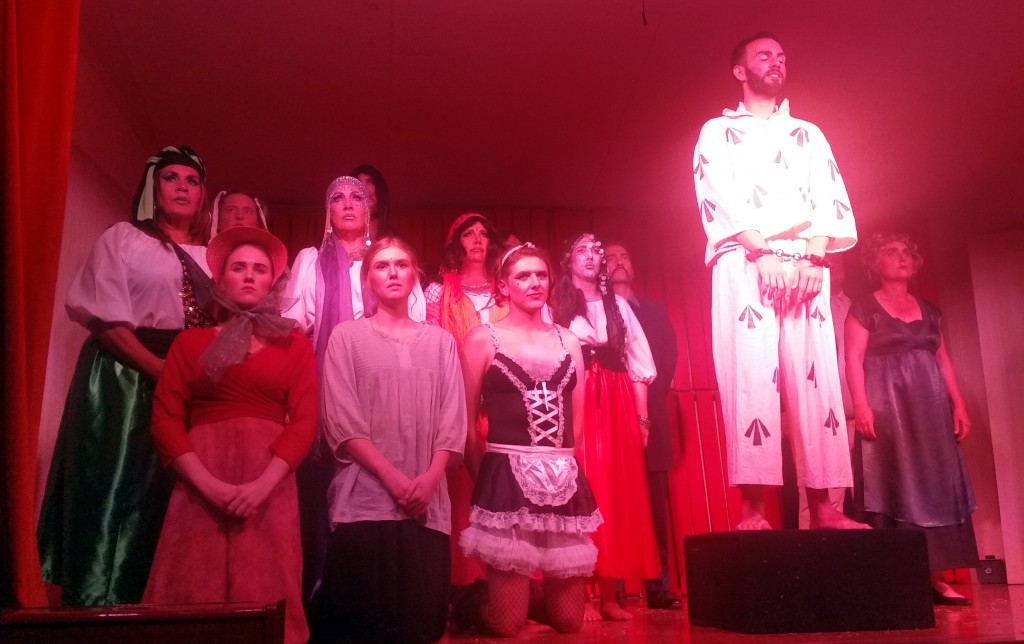 William Corder’s murderous ways finally catch up with him and he hangs for the crimes he’s committed.

“To say I have enjoyed the experience is an understatement, although wearing lipstick and make-up is not something that I do on a regular basis,” he smiled.

“It is not only the on-stage cast that made the show but the behind-the-scenes crew delivering the costumes, hair, make-up, scene changes and lighting . . . it is a credit to all involved,” David said.

Behind-the-scenes man Cameron Fearnley, whose unyielding participation in scores of cultural, musical and theatrical productions in Moree over the years goes largely unnoticed, said the cast and crew, with a wide range of ages and experience, excelled with a production that they can be truly proud of.

“It has been marvellous to see a team of enthusiastic people giving their time and skills in months of preparation to get the Moree Arts and Community Thespians and their premiere production, The Red Barn, up and running,” he said.

“It is a wonderful start to what I hope will be a renaissance of amateur dramatics in Moree and it has been so gratifying to see the people of Moree coming out to support MACT’s efforts by selling out five performances.”