A specially-convened public meeting will be held in Moree tonight (February 5) to discuss the horrific outbreak of deliberately-lit fires in and around the town.

Firefighters have responded to more than 200 house and grass fires in an eight-week period.

The Memorial Hall meeting, to be convened by representatives from Barwon Local Area Command, Moree Plains Shire Council and other agencies will address the ongoing issue of suspicious fires being lit in and around Moree however Moree councillor John Tramby says the town was in the grip of a crime wave.

“We need to get the community involved – you can’t police your way out of this problem,” Mr Tramby said.

He said “it has to come from the people as well”.

“The police have indicated that they get information (about crimes) but people won’t sign a document. They will give information anonymously, but they won’t put their name to it because they are worried about their own safety, and it is very hard to get a conviction unless you have a witness,” Mr Tramby said.

He says that there needs to be greater council and community involvement and that there also has to be programmes put in place to help disadvantaged youth in Moree.

“There are programmes in Dubbo and Kempsey that are specially funded and they are targeted at children who don’t have a good home-life, and they are focused at making sure those particular children get to school each day, have somewhere to do their homework and that they get mentoring to break the cycle,” Mr Tramby said.

“That’s not happening in Moree. It’s not being funded and yet we are told that we have 76 welfare agencies here. No-one knows what they are doing, or who’s doing what or who’s responsible for what. 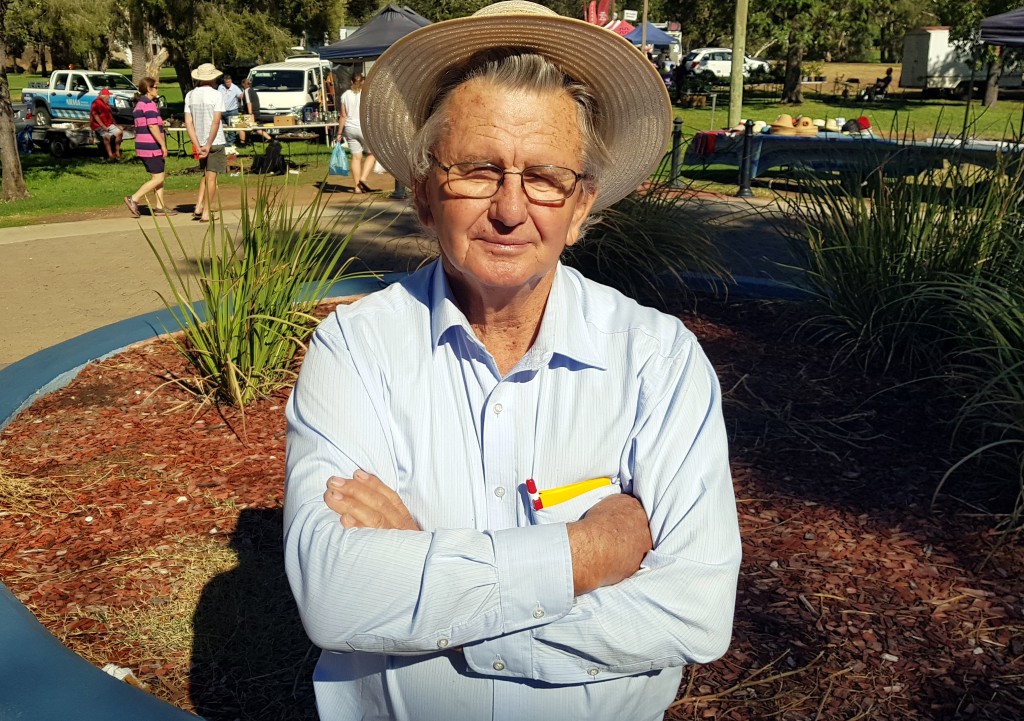 Moree councillor John Tramby at the Moree Markets on Sunday. He says a crime wave sweeping Moree is having a detrimental impact on the town (Image Copyright Bill Poulos).

“Without speaking out of turn, Family and Community Services do not work past seven o’clock at night. They don’t have an on-call service for police looking for a safe-house for young children who are roaming the streets, that sort of thing.”

“My notice of motion to council was that we have to get more involved at an administration level as well as a ministerial level to get some changes in Moree,” he said.

Mr Tramby said too many local residents are saying that ‘it happens in other towns as well’.

He said Moree’s crime rates are well above the State average.

“People say that this problem is everywhere. Don’t compare us to other towns – we simply don’t want it here,” Mr Tramby said.

He said break-and-enters in Moree are 8.8 times the State average.

“It is exceedingly high. In the 12 months to the end of September last year we had 406 house break-ins,” he said.

“Two adjoining towns had 126 and 75 house break-ins (so) we have a problem that is three and four times worse than any other town in the area.

“I put to council that we have to reduce our crime rate across the board to the State average or less,” he said.

“We have to have a goal and the key performance indicator is to get to a point where we are at least State average or lower – we don’t want to be three or five, or seven times the State average.

“It is having a detrimental impact on our town, a financial impact. Just the cost of car insurance and house and contents insurance is higher in Moree than anywhere else,” he said.

“What is keeping Moree going at the moment is its strength, but it’s difficult to attract people to come to town,” he said.

“Once they do come here they want to stay, but those that want to leave for retirement reasons can’t sell their home for a reasonable price.”

Mr Tramby says that real estate values in Moree have dropped 20 percent over the last four years. “That is affecting people’s retirement plans; people who want to relocate to the coast or elsewhere can’t,” he said.

The primary aim of Monday’s meeting is to discuss ‘arson activities’ in and around Moree.

“The fires need addressing and the great problem is that the system is being overwhelmed,” Mr Tramby said.

“The rural fire service is made up purely of volunteers. They either have a job to go to during the day or they are retired.

Mr Tramby said that one volunteer firefighter, a carer for a disabled wife, was called out 23 times in January – and when he was called out it was to multiple fires.

“For 23 out of 25 days he was out for hours and hours on end attending these fires,” Mr Tramby said.

“At one fire recently, he and other firefighters were down on the river bank fighting a fire that was deliberately lit.

The public meeting will be held at Moree Memorial Hall on Balo Street at 6pm on Monday, February 5, with doors opening at 5.45pm.