LOCALS can now get a clear impression of what the redeveloped Armidale Rural Referral Hospital will look like, with the launch today of the schematic design for the $60 million redevelopment by Member for Northern Tablelands Adam Marshall.

The state MP said the exterior of the redeveloped Armidale Hospital would complement the architecture of the existing hospital and the style of other buildings in Armidale. 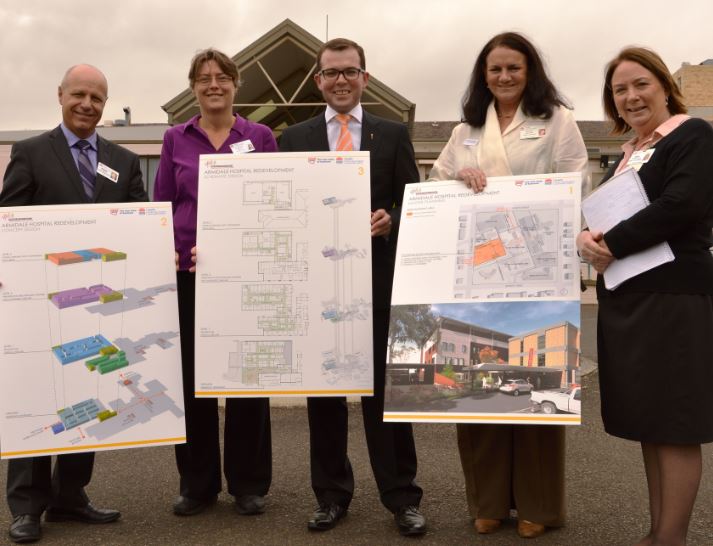 “The planning team has worked in partnership with local doctors, nurses, allied health and support staff to develop the layouts and configurations of the new and redeveloped facilities,” Mr Marshall said.

“Consultation has also been undertaken with local community representatives, patients and the Aboriginal community to incorporate local needs.”

Mr Marshall said work would now continue on the final detailed designs for the hospital.

“The final planning phase involves the project team deciding on details such as room fit outs, carpet and paint colours and location of furniture and equipment,” Mr Marshall said. “This work is expected to be complete early next year.”

In addition to the schematic design launch, Mr Marshall announced APP Corporation (project manager), Wilde and Woollard (cost planner) and Building Studio Architects as the lead design team for the next and final phase of the Armidale Hospital redevelopment.

“This is an important and exciting milestone in the $60 million redevelopment, made possible with the allocation of $1 million in this year’s Budget,” Mr Marshall said.

“The redevelopment will deliver a mix of new and redeveloped facilities, including the construction of a new four-storey building which will be directly linked to each floor of the existing three-storey main hospital building.

“Combined with the new University of New England Tablelands Clinical School and the impressive Ambulatory Care and Chemotherapy building, the redevelopment of Armidale Hospital will see a world-class health precinct in our region which combines extensive quality clinical and community health services with impressive teaching and research facilities.”

Mr Marshall said that in preparation for the main construction project, minor work will begin on-site towards the end of the year as some of the smaller existing buildings are removed to create space for the new hospital building.

“The community will continue to be involved in the process of capturing and documenting the history of the buildings on the campus,” he said.

“Construction of the new four-storey building and the redevelopment should commence in late July next year, following the calling of tenders for the works.”