THE boat is called  Plan A because there is no Plan B and the long trip south has been one big learning curve for Moree adventurers Sam Tapscott and Jock Gartshore as they chase their wildest dreams at the Red Bull Riverland Dinghy Derby tinnie races at Renmark in South Australia.

The boys from the bush are holding the flag high for Moree, and competed in the Dash for Cash on Friday night with their modified 10-foot tinnie powered by a 30hp outboard.

And if anyone from Moree is looking for logs for any particular reason, Sam and Jock know where there’s plenty. 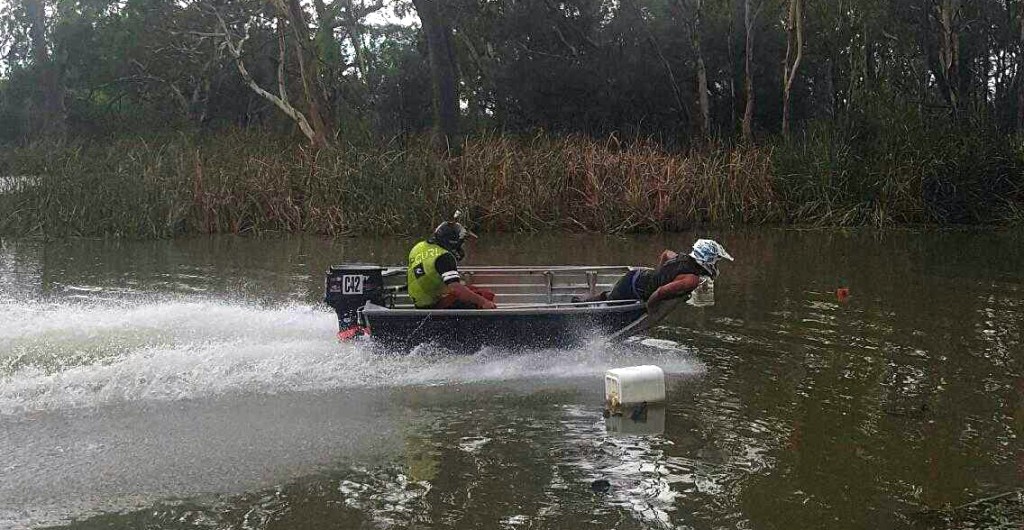 Plan A, with Sam Tapscott at the helm and Jock Gartshore at the front controlling the boat’s direction as the do practice runs for the Red Bull Riverland Dinghy Derby at Renmark in South Australia on Sunday (Image Supplied)

“We were about 10 seconds off the pace, and that’s mainly because our boat wasn’t rigged the right way for that sort of race,” Sam said.

Seasoned competitors use different equipment for props and motors in the Dash for Cash so the jump from a standing start will be quicker – one nugget of valuable local knowledge unknown to Sam and Jock until they arrived at Renmark.

“It’s been one hell of an experience and we’ve learned a lot since we’ve been here,” Sam said.

“The Dash for Cash is from a standing start and you slow up through three buoys and then U-turn around a big Red Bull buoy at the end. Then it’s a straight line back to the finish – all up about 500m.

“There’re two lanes side-by-side – two identical courses – with two boats racing at once. It’s also a time-trial with a GPS transmitter fitted to the motor. When you get the green light at the start you hit the throttle, head down through the slalom and U-turn back to the end.

“You do that once and then you swap sides,” he said.

Sam and Jock are now preparing for tomorrow’s Red Bull Riverland Dinghy Derby, where high-powered tinnies will race along a 100km stretch of the Murray River.

They’ve been doing practice runs for most of the week, and now that they know where all the logs are, confidence is high.

“We’ve been down through the creeks probably four times now, and following the local blokes – following their bubble trails and tugging the same line,” Sam said.

“The locals know where all the logs are, and we found a few on the first day – that was a bit hairy,” he laughed.

And it’s no easy course, as the boys found out on day two of practice runs.

“There’s a spot called Carnage Corner; it’s a really tight 90-degree corner that nearly turns back on itself,” Sam said.

“We came through a bit fast on a practice run and slid out up the bank and into the reeds – threw us out of the boat.”

The Red Bull Riverland Dinghy Derby, first run in 1981, draws scores of competitors and thousands of spectators from across Australia and is by no means a race for the faint-hearted.

There are 118 boats competing across all classes with 42 in Plan A’s event, the novice class.

Scrutineering for tomorrow’s 100km of pure madness, where competitors race for a $6 plastic trophy, starts at 6am sharp with Sam and Jock’s event scheduled for 9am.

“Scrutineers go right over everything to check all our safety gear and to make sure nobody has done anything to the motor or the hull to bend the rules,” Sam said.

“We’ve got everything sorted out and ironed out a few problems, and we’re confident we can finish midfield or better.”

Click this link to read about how the boys devised the plan to head to Renmark to compete in one of the craziest races ever: http://deluxecafemoree.com.au/moree-lads-prepare-to-launch-for-madcap-boat-race-in-south-australia/