Petition launched to reduce daylight saving by one month

Mr Marshall and his state colleagues want as many signatories as they can muster for the move to bring the clocks back by a month each daylight saving period and they’re counting on more country people to back their protest with their names.

The petition is designed to show a countrywide support about the move and trigger a debate in the Legislative Assembly. 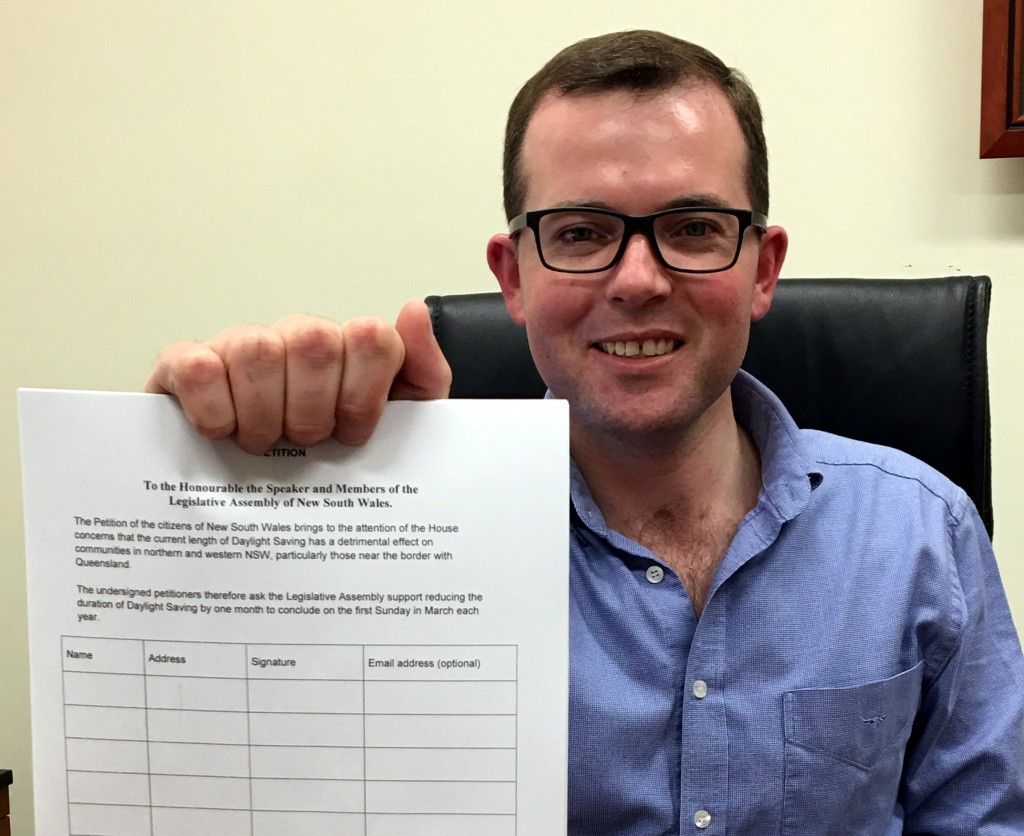 Northern Tablelands MP Adam Marshall today launched a statewide petition to support the reduction of daylight saving by one month.

Mr Marshall has launched the petition on the back of support from other country MPs.

“There is wide support for this move, particularly in country areas, and the petition is designed to demonstrate to city MPs the strength of that support,” Mr Marshall said.

“Typically a petition would aim to get 10,000 signatures to trigger debate, but with this petition, we’re after as many names as we can get. It’s about getting as many signatures as possible to back our case, and promote the Bill before parliament.

“It’s not about ending daylight saving, which is a passionate subject for many people. This is purely about ending it just one month earlier. Across country NSW many people agree that the last month is just a pain; it drags on too long.”

Mr Marshall said the issue of daylight saving being too long was more intense and strongest in the northern stretches of his electorate, near the Queensland border where it was confusing and difficult to do business and live life with two time zones for so long.

Petitions are available at Mr Marshall’s electorate offices in Armidale and Moree and form every local council across the Northern Tablelands. As well, individuals can obtain petition forms from Mr Marshall if they want to back the clock crusade.

Share
Share:
Moree roads get $700,000 to improve freight efficiency while Moree-Inverell railway line could be back on track by December

Moree roads get $700,000 to improve freight efficiency while Moree-Inverell railway line could be back on track by December

Next post
Moree Plains gets $11.2 million to modernise town and villages’ water supply