IF jockey Kody Nestor needs to pull the persuader on four-year-old Cheltenham at Gilgandra races on New Year’s Day, rest assured he’ll get a gentle nudge from above – just a nudge, mind you – when he makes his winning move on the fleet-footed gelding.

Cheltenham is part-owned by all-round good bloke Billy Maidens, who sadly lost his battle with cancer on Christmas Eve.

But if there’s a tote window in heaven – and who is to say that there isn’t – Billy will make sure that Cheltenham’s odds begin to tumble just before post-time on Sunday.

Billy Maidens was a hardworking rural contractor who knew – and built – just about every lineal mile of fencing in the Moree district during a career that spanned decades.

He also farmed his small acreage The Oaks, tucked in behind Chinaman’s Lane, and in his spare time drove a regular school bus run. 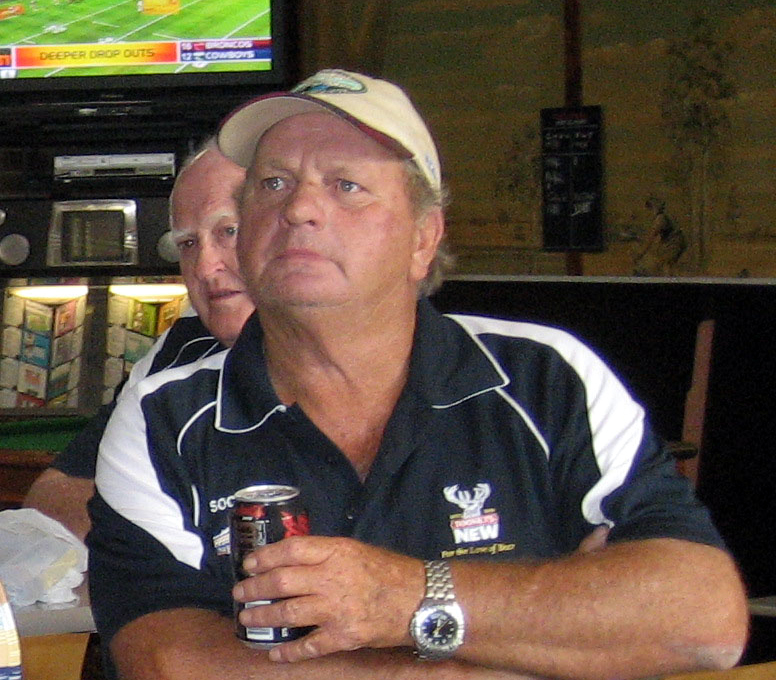 Billy Maidens in a familiar pose: keeping an eye on tote fluctuations before one of his fancies jumps from the barriers. (Image courtesy of Kerry Hine)

Billy was also heavily involved in the local polocrosse competition – he was a NSW and north-west plains selector – and was an active member of the Moree Pony Club, which a year or two back recognised his heavy involvement by affording him life membership.

He loved his racing, his golf and his fishing – and a nice, cold beer to go with each of them – and was one of those blokes that was just good to be around.

Billy, who was just 63 when he passed away, knew how to make people smile.

He had his own special brand of bone-dry, good old-fashioned Aussie humour and, most importantly, knew how to turn a bad day into one to remember for all the right reasons.

With a simple shrug of his shoulders and that wry smile, Billy could change any negative into a positive, and all within a twinkling.

And when people chuckled at his subtle asides, Billy’s deadpan poker-face remained intact.

Only his eyes would smile ever so slightly, maybe twinkle, and sometimes give the game away.

Once, when an unsuspecting punter asked Billy which jockey was riding his horse Convoy at Toowoomba one Saturday afternoon, Billy whispered: “CW McCall”.

Younger readers might need to reach out to Google to figure out Billy’s response, but the greenhorn punter that hung on to Billy’s every word walked away thinking he was the only bloke – apart from Billy – that knew about this important, late riding change.

Yes, subtlety mixed with a little dryness – and a twinkle in the eye, of course – was a hallmark of Billy’s, so it seems only right that he also part-owned another very handy horse called Subtlety.

Cheltenham and Subtlety, both trained at Nyngan by Rodney Robb, went around at Moree just a week before Billy’s death.

They ran out of their skin but just couldn’t quite get their bibs in front when it mattered.

Subtlety finished a close-up fourth then about 40 minutes later Cheltenham came from a mile back to grab a luckless third. 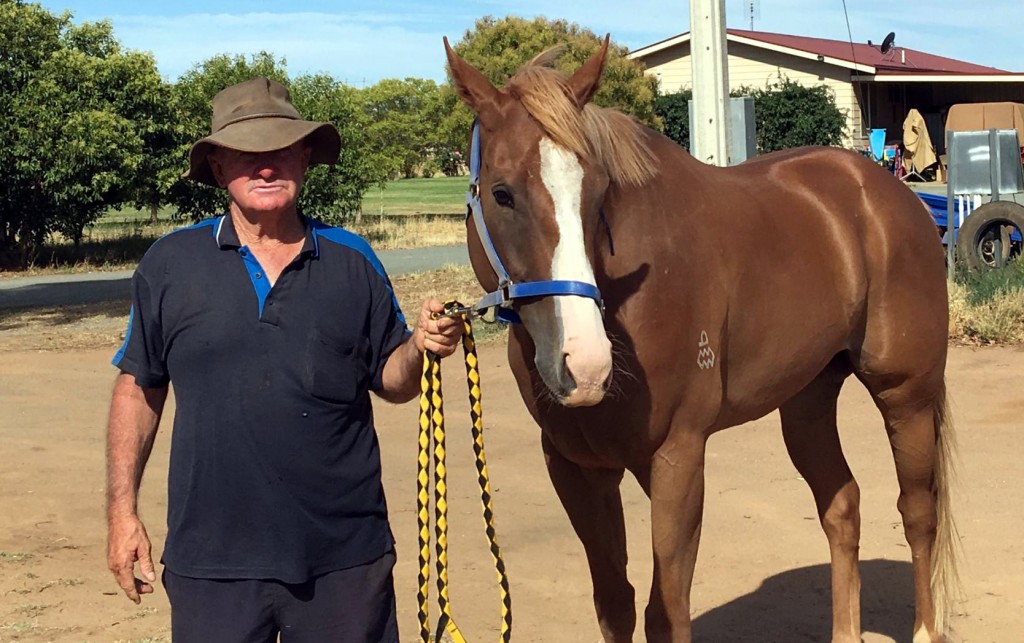 Nyngan trainer Rodney Robb and Cheltenham, a horse part-owned by Billy Maidens. Cheltenham will give Billy one last hurrah at Gilgandra on New Year’s Day (Image courtesy of Clayton Gallagher)

Cheltenham copped more bad checks than the Royal Hotel during the shearers’ strike of 1956 before rattling home late.

“He missed the kick badly – it was a good run – but he pulled up fine and I think the 1200m at Gilgandra will absolutely suit him,” Rodney Robb said.

“The reason the horses went to Moree is because we were hoping that Billy might’ve been able to get to the races to watch them.

“One of the owners, Wayne Brown, is a long-time mate of Billy’s and he wanted Cheltenham to go to Moree – and the horse should’ve nearly won,” he said.

Stable apprentice Clayton Gallagher rode Subtlety the same day and, for the emerging jockey, it was more than just another booking.

Clayton is born-and-bred in Moree and cut his teeth at pony camps and jamborees around the district before lobbing at Robb’s western districts stables.

He says he owes a lot to Billy Maidens, who helped the aspiring young horseman whenever he could.

“I had a fair bit to do with Billy when I was in the pony club at Moree about six or seven years ago,” Clayton said.

“I didn’t have a ride at the Upper Horton Jamboree one year and I wasn’t going to go but Billy offered to take me and my horse up there in his truck and I won the campdraft.”

Clayton now makes a habit of booting home winners, but that one last win for Billy just wasn’t to be.

Subtlety has headed to the spelling paddock for a well-earned rest, but Cheltenham will have plenty of help from above at Gilgandra on Sunday.

“It would’ve been great if Subtlety had won the other day at Moree,” Clayton said.

“I would have loved to ride a winner for Billy while he was still with us, but sadly it turned out that he didn’t have as long as we all thought.

“When Billy came out of hospital at the Gold Coast, we all thought he was on the good side but it wasn’t to be.

“Billy was just a well-known and well-loved bloke, who would go out of his way to help anyone,” he said.

Best mate Gary Lawrence says his life changed completely nearly 20 years ago when he and his wife Jo arrived in Moree unheralded to take on management of a local watering hole.

They knew absolutely no-one but within a fortnight of feeling their way around town they were being wined and dined by Billy and Linda Maidens.

“We were invited to have a roast dinner with the Maidens family – it’s just on 17 years ago now – and we soon became the best of mates,” Gary said.

“And believe me, Billy knew how to knock up one hell of a baked dinner,” he smiled.

Before Gary and Jo could say “pass me that bridle”, Billy and Linda were teaching their kids Jessica and Jacob how to ride horses.

Ponies at first, and then those bloody big ones. 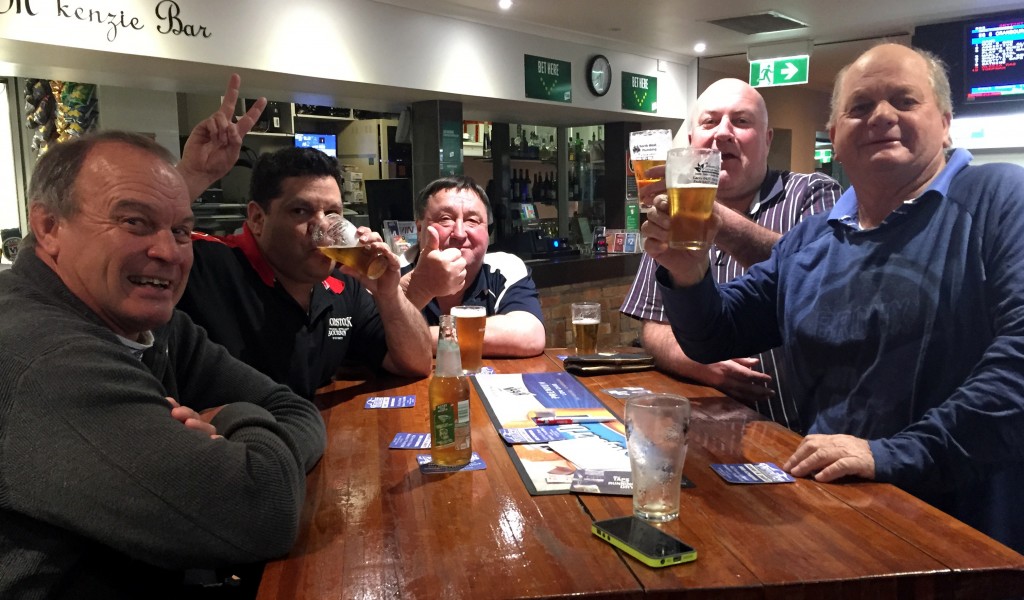 Billy Maidens with some of his Royal Hotel Social Club mates. Club members are requested to wear club T-shirts to Billy’s funeral and wake on Friday, December 30 (Image courtesy of Debbie Evans).

And they learnt fast – both kids went on to play polocrosse for Australia as well as at State level for NSW and Queensland.

“Billy and Linda taught our kids how to ride and handle horses at The Oaks and that was how the polocrosse journey began,” Gary recalled fondly.

“Billy could only see the good in people and he was always helping out, whether it was with money, fuel, food or the shirt off his back.

“Billy was my best mate and I learned to be a better person just by being with him.”

“I was thinking about Billy a couple of days after he died and I was just feeling so fortunate that life brought us together and made us best mates,” he said.

“I started to cry like a baby and then I began to realise that Billy is in a better place, and that we needed to share him with God.”

Meanwhile, when Cheltenham canters around to the barriers at Gilgandra on Sunday, there will be one very special person watching from above.

And he’ll be ready to give Cheltenham that gentle nudge – just a nudge, mind you – as the field gallops into the final furlong.

But as family and friends watch intently, they know that Billy’s gentle urgings won’t be needed.

They know deep down that Cheltenham will give Billy that one last hurrah – the perfect salute to an all-round good bloke that left them way too soon, and way too unfairly.

Billy’s graveside service will be held at Moree Lawn Cemetery at 11am on Friday, December 30 with drinks afterwards to celebrate Billy’s life from midday at the Royal Hotel Moree.

Members of the Royal Hotel Social Club are requested to wear club T-shirts.

Advice for avoiding misadventure this Christmas

Next post
Moree police kept busy during the Christmas break