IT is nearly three years since Sam Sabine, a giant of the Moree community, passed away.

He was well-known as the quietly-spoken, behind-the-scenes man whenever the call came to raise money for Moree charities and vital services, especially the Moree Hospital.

And while Sam’s death left Moree a much poorer place, rest assured that he is smiling broadly at the news that member for Northern Tablelands Adam Marshall this week moved a Notice of Motion in State Parliament, requesting the NSW Government to allocate funding and to prioritise the construction of a new and expanded renal dialysis unit at Moree District Hospital.

In the years that followed Sam and his hardworking renal unit committee raised hundreds of thousands of dollars and now, Mr Marshall has rallied to the cause with a notice of motion to expand the vital facility.

Mr Marshall said the existing five-chair unit was in desperate need of expansion and says that there needs to be a purpose-built, modern space constructed.

“The unit is at full capacity and cannot be expanded in its current space within the hospital,” Mr Marshall said. 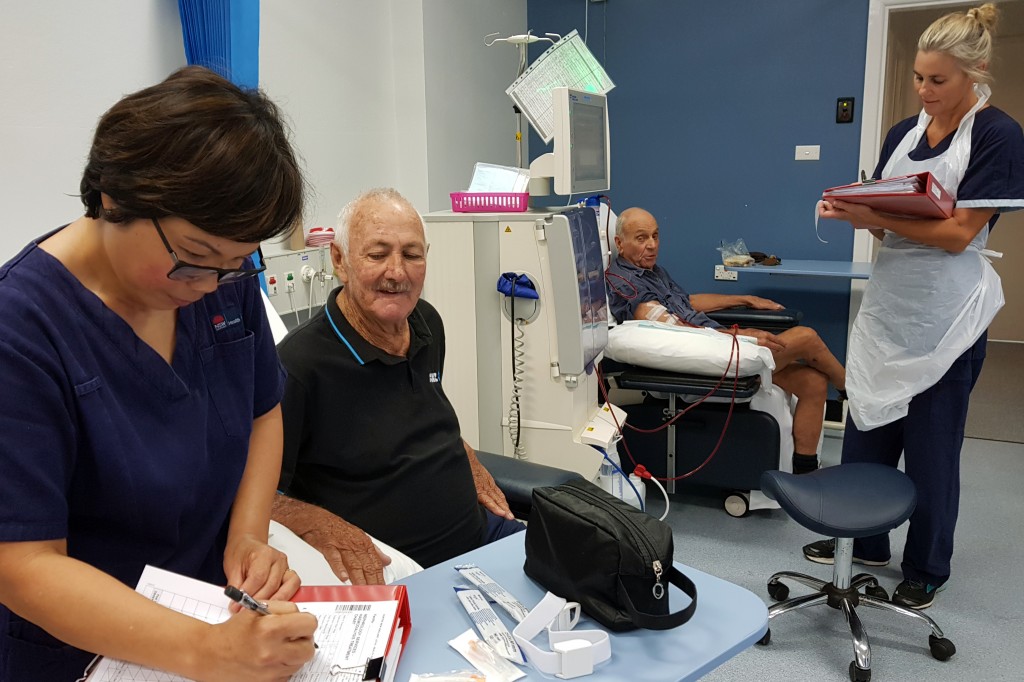 “The nursing staff at the unit are exceptional and, despite running multiple shifts in the unit to maximise the use of the chairs for patients, they cannot keep up with the growing demand for this service.

“There’s a waiting list for the chairs, which leaves people in need of this service with only two options – take up home dialysis, which isn’t appropriate for some people and can be expensive, or to travel to Tamworth for treatment, which is a round trip of six hours, three times each week.

“The community needs more renal chairs in the unit, which, given the layout of the hospital, can only occur in a new purpose-built facility,” he said.

“The demand for renal dialysis will continue to grow in the Moree district and the community needs a new unit that is welcoming, modern and can accommodate more patients and meet future demand,” Mr Marshall said.

He relocated to Moree from Kelly’s Gully, a small village a few kilometres south of Warialda, to be closer to the renal ward.

“I had to move to Moree to use dialysis,” Mr Turner said.

“I have low blood pressure and just couldn’t drive that far. Plus, I’m too old and burnt out, but I’m in good hands here.

“I’ve simply got no kidney function at all, and can’t live without it (dialysis),” he said.

“We are all on five-hour sessions, bar one little girl that comes over from Wee Waa – she’s on dialysis for four-and-a-half hours,” he said.

Mr Turner said the proposed expansion was great news for patients as well as the hardworking renal staff that work long shifts.

“They are all good people here, especially the two that are here now – they’re my favourites. You can’t say a bad word about either of them,” Mr Turner winked.

“It will be nice to see the facility expanded – it’s well overdue. There is nothing wrong with the facility the way it is, but it’s too small for what they are trying to do.

“It will be great if they can build it – I hope I live long enough to see it,” he chuckled.

1: Acknowledges the strong support of the Moree community in funding a five-chair Renal Dialysis Unit at Moree District Hospital and the dedicated nursing staff who support its patients;

2: Notes that many years on, the unit is cramped, in high demand and at capacity, with some members of the community now having to travel away for dialysis or purchase equipment to undertake home dialysis; and

3: Requests the NSW Government to prioritise the funding and construction of a new and expanded dialysis unit at Moree to cater for increasing demand for this vital service.