Noel, a former top jockey who rode 1092 winners during a career that began at Raymond Terrace   in 1951 and was completed at Moree in 1980, passed away last week.

Noel was also an official race-starter with the Hunter and North-West Racing Association for nearly 30 years as well as a long-serving employee with Moree Plains Shire Council.

Family and friends as well as jockeys, trainers, racehorse owners, bookmakers and former work colleagues gathered to remember a man that was well-known for his cheeky sense of humour and boundless generosity.

Among the mourners was riding great Scott Seamer, a former Glen Innes jockey who went on to win  the coveted Caulfield Cup-Melbourne Cup double in 2001 on outstanding New Zealand mare Ethereal.

Seamer, who also won the 2002 Golden Slipper on Calaway Gal among a host of big-race successes, said it was wise to be ready when Noel pressed the starter’s button.

“It was 20 or so years ago when I first came up this way riding,” Seamer recalled.

“Noel was the starter and you soon learned to be ready when the last couple of horses were in – he’d let them go in a blink.

“But Noel was always a friend. When I moved away from the area he’d give me a ring every Saturday morning to see what I thought were my best three chances and he’d always have a few bucks on them. 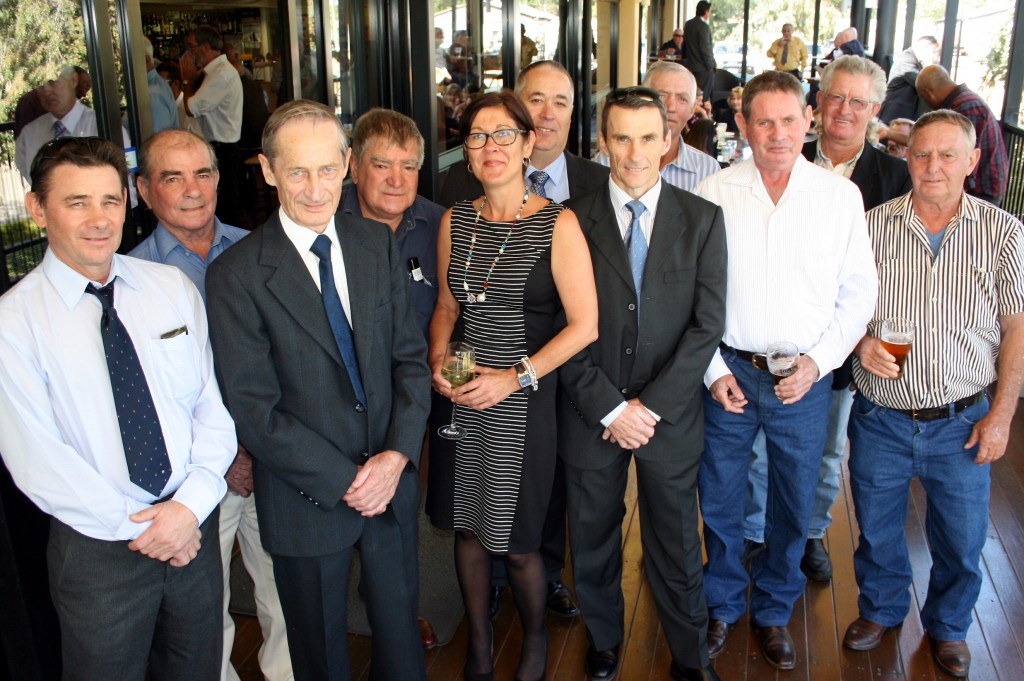 “I’d often see Noel at the Gold Coast sales because he’d always come up each year for the Magic Millions. We’d always have a beer and he was the same, good bloke from the time I met him to the last time I saw him,” said Seamer, who is now retired from riding and breeding thoroughbreds at Fernleigh, near Ballina.

Bob McKechnie, whose father Bill enticed Noel to Moree in the late 1950s, well remembers the day his dad legged Noel aboard his first ride for the big-betting stable.

Brothers Noel and John Colvin during their riding days together in the early 1950s. Image supplied.

“Dad had two runners in the race and put Ernie Walmsley on the favourite Willy’s Sister and Noel on Last Sound – Ernie was the leading rider and no-one had ever heard of Noel Colvin.”

Willy’s Sister was a full-sister to Willy’s Choice, which had won 50-odd races from Sydney to Brisbane and just about all tracks in between, so bookies posted it a short-priced 6-4 on favourite. Stablemate Last Sound, with the “unfashionable” Noel Colvin on board, was rated at double figures.

“Dad was walking around the front of the bookies having 60 to 40-on Willy’s Sister while mum and a couple of her girlfriends were going along the back and having 1000 to 100-against Last Sound – these were pounds, not dollars – and, of course, Last Sound bolted in,” McKechnie said.

“Noel had only been in Moree a fortnight and told me that he’d already banked 200 pounds – he’d never seen so much money.

“Noel was a man who liked to call a spade a spade, sometimes a shovel, and his honesty was his main attribute.

“He was a good little bloke, and he’ll be sadly missed,” McKechnie said.

In typical Noel Colvin fashion, the former riding great had two wakes happening simultaneously on Monday afternoon – one at the Victoria Hotel where he was  a founding member of the pub’s social club and the other at the Moree Golf Club – and it seems just about everyone that knew Noel had a story to tell.

Just for the record, it is not true that Noel, who was a tad more “vertically challenged” than most jockeys, lived in a caravan for more than six months before realising it was a “pop-up”  – but it’s a yarn that he loved.

It is true however that back in the 1960s, after big days at the track, Noel could wake an entire neighbourhood with late-night, strangled renditions of Fats Domino’s huge hit, Blueberry Hill.

Veteran stock agent Neville Schmidt recalls the days when jockeys and strappers often took on stock and station agents in rugby league “friendlies”, and more often than not the matches were refereed by none other than league legend Clive Churchill, who lived and played league in Moree in 1960-61.

Noel was a handy half-back who knew how to put the ball over the black dot. He and Churchill were great mates – they played golf together at least five mornings a week – so on-field favouritism was allegedly rife.

“Rife? It was red-hot,” Schmidt claims.

Noel Colvin (middle rider), at just 14 years of age, learning to “jump out” a racehorse during his apprenticeship. Image supplied.

“I was a goal-kicker that came with a bit of a wrap and we’d have side-bets on who would kick the most goals.

“The problem was that Noel would yell out to Clive ‘now!’ and Clive would give him a penalty kick right in front of the uprights – they were halves in the bets,” Schmidt laughed.

Noel Colvin will be greatly missed. He was an important part of the development of thoroughbred racing in the north and north-west and his input and insight over more than half a century was invaluable.