REPLACEMENT of the ageing regional rail fleet, starting with new XPTs, will be accelerated with $50 million to speed up delivery of new trains and improve comfort and reliability.

Deputy Premier Troy Grant and Minister for Transport and Infrastructure Andrew Constance announced extra money has been committed, which will see the procurement process for new XPTs kicking off in the first half of next year – two years earlier than promised.

“We’ve already committed to starting planning for a faster, modern, comfortable country train fleet by 2019, but we’re not going to wait. We’re getting the ball rolling now so we can get contracts signed in this term of Government and new trains on our tracks earlier,’’ Mr Grant said.

“This is a real commitment to rail passengers in the bush and we expect it to also generate regional maintenance jobs.’’

“We’ve boosted spending now to $50 million so we can bring forward the best solutions for country travellers,” Mr Constance said. 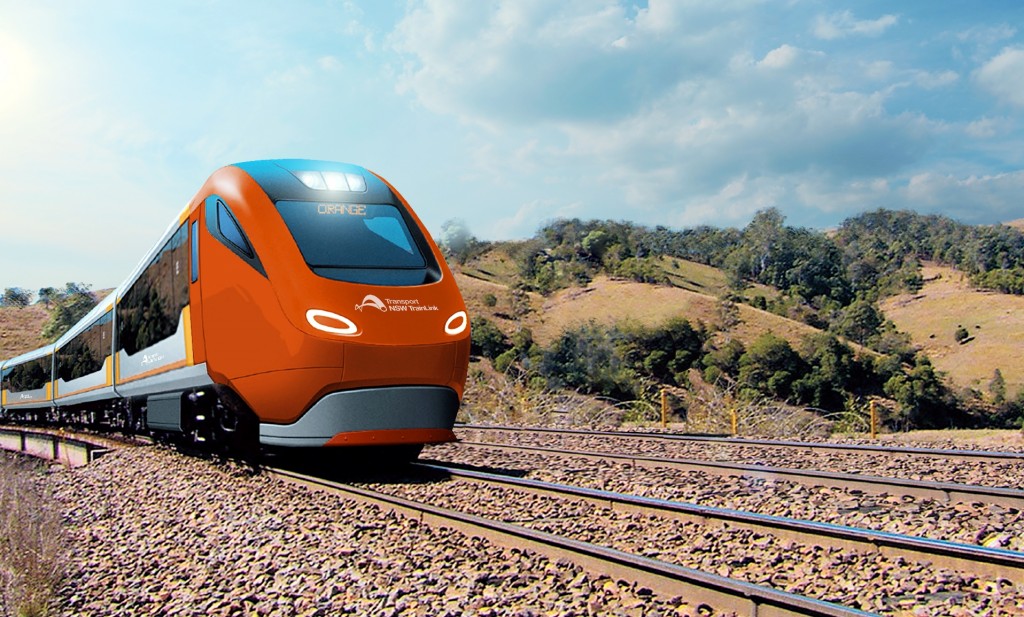 Artist Impression of the new train on the way to Orange (Image: www.transport.nsw.gov.au)

“We want this to be a great outcome and for that to happen, we need to start talking to industry about the options available and how we get new trains on the track quickly.”

Opportunities to replace more than 50 XPLORER and Endeavour trains that serve other key regional destinations like Armidale, Moree, Griffith, Broken Hill, Canberra, the Hunter and South Coast (between Kiama and Bomaderry), will also be investigated as part of the work.

“Country travellers deserve modern trains, and the very real dividends resulting from the sound financial management of this Government will make it happen,’’ Mr Grant said.

“A new fleet of trains will ultimately require less work to maintain, are more reliable and can be used more often.”

Each year about one million customer journeys are taken on the XPT fleet, which travels 3.5 million kilometres a year. The trains are up to 35 years old.

“Tourism is going from strength to strength in country NSW with the highest absolute growth in visitors recorded across regional Australia, up by 1.2 million visitors and 4.5 million nights,” Mr Marshall said.

“A total of 20.4 million visitors, an increase of 6.4 per cent of visitors made the choice to spend time in the stellar beauty and unique attractions of our regions, and further work to turbo-charge regional tourism will see this trend continue.

“The Northern Tablelands has been a great part of that growth with events including the Evocities MTB Series in Armidale last weekend and Opera in the Paddock in April in Inverell and Armidale attracting wide audiences.

“And we have just seen that clearly demonstrated in Armidale with the latest Day on the Green musical event; it attracts thousands of visitors here from outside our region, particularly from inland and coastal destinations, as well as further afield.

“And we know the value of sporting events to this region too, especially with junior sport when parents, siblings and other family members follow their children to compete.”

Mr Marshall said the NSW Government’s $43 million investment across the next four years will revolutionise the way regional and rural areas attract visitors, including the creation of dedicated Destination Networks across NSW.

“We’ve also expanded the Regional Flagship Events Program with a total of $6 million in funding over four years, and a new Regional Tourism Fund for marketing and product development is set to launch soon,” Mr Marshall said.

“Through Destination NSW we are driving visitation and support for the regions through a robust calendar of events, marketing regional destinations across Australia and the world and establishing industry partnerships with the likes of airlines and accommodation providers.”

Minister for Trade, Tourism and Major Events Stuart Ayres said there had been an exciting response to the call for applications to the Board positions for the Destination Networks with more than 600 received.

“The overwhelming response from industry is a real vote of confidence that NSW needs this new tourism structure and appointments are on track to be complete by the end of this year,” Mr Ayres said.