WORK on a concrete slab that has been on Gwydir Industry’s wish-list for “years” will start in July, thanks to a $5500 donation from Moree Lodge Courallie.

Nearly $3000 was raised at a trivia night earlier this year and that money was matched dollar-for-dollar by Masonicare, a benevolent organisation within the Masonic movement that is the official charity of NSW and ACT Freemasons.

Lodge Courallie Worshipful Master Wayne Hamilton said the people of Moree had once again dug deep to support one the town’s most respected charitable organisations.

“It was a pleasure to be able to help out a local community that is so well respected within the entire community,” Mr Hamilton said.

“People like to dig deep for Gwydir Industries and that was proved at our trivia night. We probably only had one third of the number of people that we had the year before but we were only about $1200 short  of the funds raised that year,” he said.

Eric Carrigan, a Gwydir Industries board member for 27 years, said the donation will be well utilised.

“It is a very generous donation – we just didn’t expect that sort of money,” Mr Carrigan said.

“The money will be used to lay some concrete out in the back section where we store our plastic and cardboard before it is trucked away.

“We have a couple of forklifts that are used to load it and to move it around after it has been pressed and we’re still running those around on gravel, which is hopeless. 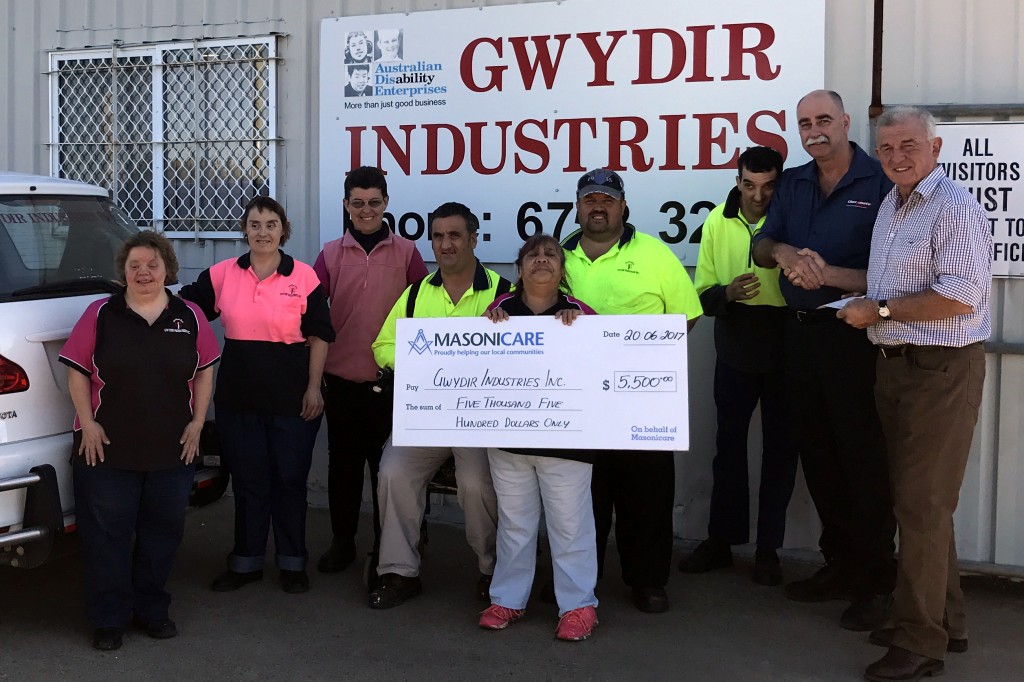 “It’s something that we’ve wanted to do for years and now we’ll finally be able to properly concrete the area,” he said.

“We’ve had this on the backburner for a little while but now with this money that has arrived from the Masons we will try and kick-start the project by the end of July,” he said.

“This $5500 will go towards that, and will be very well utilised.

“We have about 25 clients at the moment and just make our money out of furniture restoration, cardboard and plastic recycling, trophies and our dog kennels, so this donation is very much appreciated,” Mr Carrigan said.

Mr Hamilton, whose term as Worshipful Master  ends in September, said Moree Lodge Courallie would continue to fundraise for local charities and institutions.

“In the past Lodge Courallie hasn’t been quite as public about its fundraising, but the movement has been fundraising pretty much forever,” he said.

“I just wanted to make it a bit more public during my term as well as get a bit more money raised for local organisations like Gwydir Industries.”

Mr Carrigan said the donation proves once again that Moree is indeed a generous town.

The money raised by Lodge Courallie comes on the back of nearly $100,000 raised the previous week at a charity golf day for Variety and a Leaders’ Leap abseiling fundraiser for Westpac Rescue Helicopter Service

“I’ve lived here all my life and when the townsfolk have got the money they don’t mind spending it,” Mr Carrigan said.

“Moree is a very generous town and this $5500 from Lodge Courallie is just another example of that.”