THE ribbon was cut and the trucks began rolling over the new multi-million-dollar Nee Nee Creek Bridge, on the Newell Highway, on Tuesday this week.

Northern Tablelands MP Adam Marshall performed the official honours and was joined by officials from Roads and Maritime Services and families from some of the neighbouring properties, who have witnessed the $7.25 million project taking shape over the ;last 12 months.

Located almost 50 kilometres north of Moree, the new 60-metre concrete bridge over Nee Nee Creek will be a critical structure for at least the next five decades, ensuring more than 4,000 vehicles every day a safe journey along Australia’s longest highway and the key freight arterial for NSW. 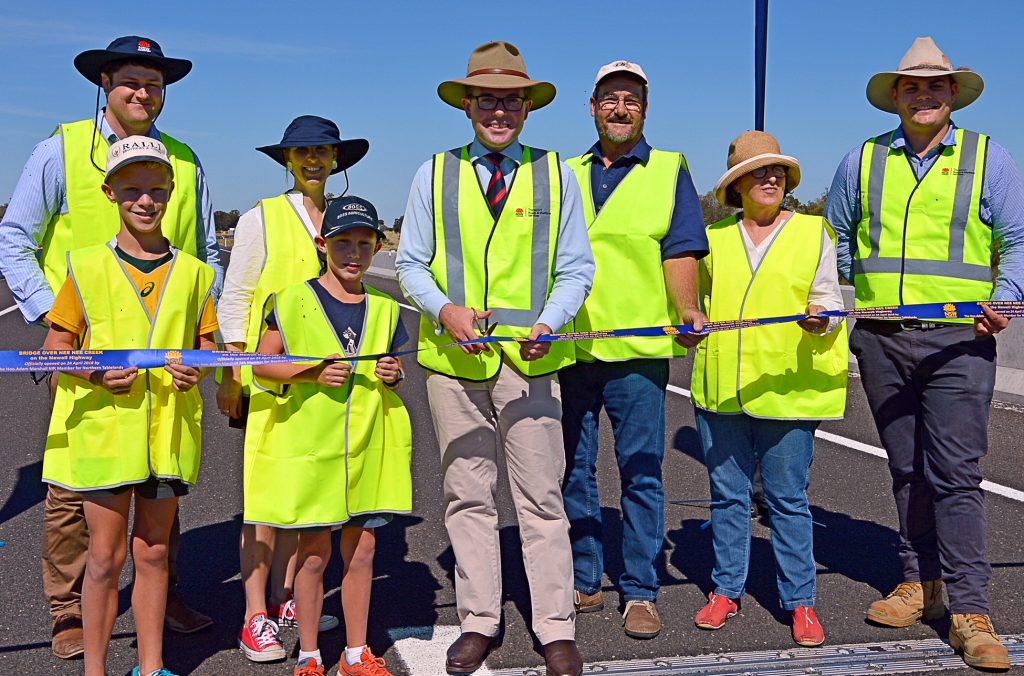 Mr Marshall said the replacement of the new bridge was critical to guaranteeing the Newell could stand up to increased heavy vehicle traffic over the coming years.

“The original bridge was built in 1966 and was widened in 1994. Checks found that the bridge had suffered some damage and not able to withstand the battering of future transport and heavy vehicle volumes,” Mr Marshall said.

“A bit over a year later, we now have a brand new 2,700 tonne, 60-meter concrete dual lane bridge that will meet all the traffic demands for decades.

“The four massive bridge piers supporting the structure have been sunk 24 metres down to bedrock – so it’s not going anywhere.

“This stretch of the Newell is considered the third most significant heavy vehicle route in the State and is particularly critical to high productivity freight movement across our region and the country.”

Mr marshall said ne bridge was just one of many projects being undertaken by the NSW Government to upgrade and imprpove safety along the newell Highway.

“There’s been three new passing lanes already built in the Moree Plains Shire and some more work going on just north of Gurley at the moment.

“I’m pleased to open this significant upgrade to the Nee Nee Creek Bridge here in our region, knowing that it will make travel safer for locals and interstate travellers alike.”