FIRE protection and emergency response in Armidale has received a huge boost with the arrival of a brand new $310,000 fire truck, Member for Northern Tablelands Adam Marshall announced today

The new Mercedes Benz fire truck, referred to as a ‘Class 2’ pumper, is now in operation after being delivered to Armidale Fire Station last week.

Mr Marshall inspected the new vehicle this morning with local firefighters and said the new ‘Class 2’ fire truck had the latest equipment and technology, which would increase the capacity of Fire & Rescue NSW (FRNSW) firefighters to deal with fires, accidents, chemical spills and other emergencies.

“The state-of-the art Mercedes Benz truck has a larger cabin than previous trucks, providing greater comfort and safety for firefighters,” Mr Marshall said. “The rear of the truck has also been remounted and modified to provide more room for equipment.”

“The NSW Government is committed to providing firefighters with the best equipment and technology available and I’m delighted that our Armidale firefighters and the community will benefit from this new fire truck.” 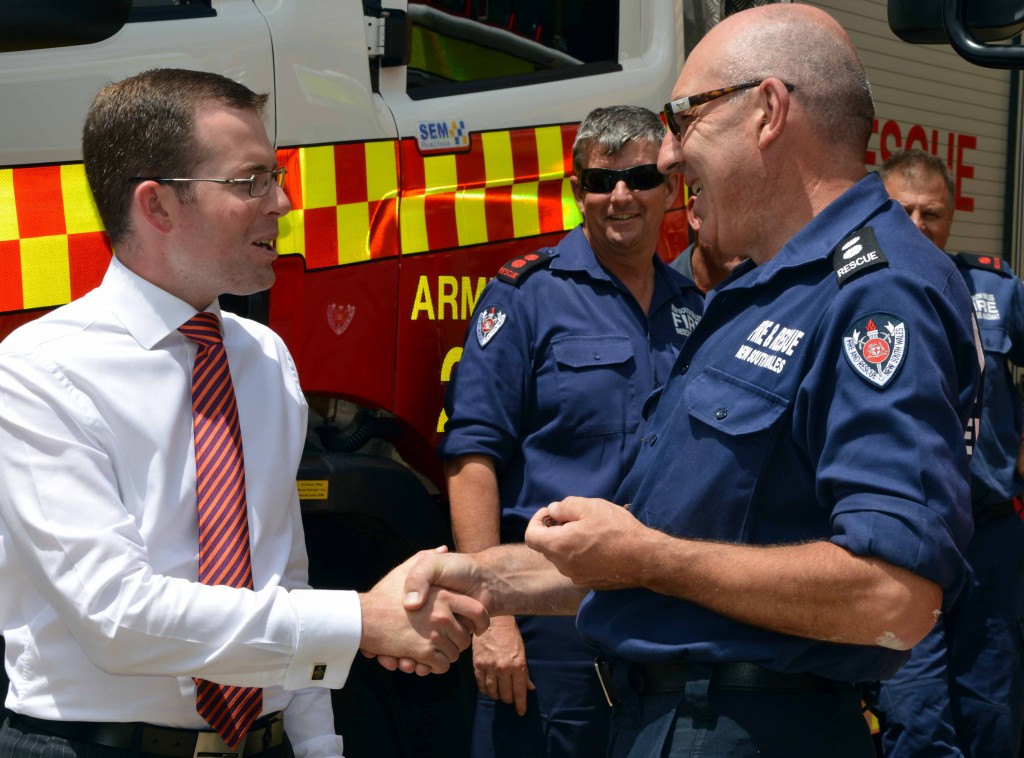 “Last year Armidale firefighters responded to more than 600 fire and emergency calls and took part in more than 240 activities designed to educate the local community about fire safety,” he said.

“There’s hardly a day that goes by that our firefighters aren’t called on to protecting the community and they do a wonderful job.”

“The FRNSW fleet is made up of more than 650 fire engines and rescue vehicles across NSW and our priority is to ensure that firefighters have the best vehicles available to them to enable to the do their jobs effectively and safely,” he said.

“The new truck will help firefighters better protect the Armidale community and will help improve the overall quality of our emergency response.”

“These councils have been working hard to address their infrastructure backlogs and to make their road networks more efficient for freight,” Mr Marshall said.

“The $42.85 million Fixing Country Roads funding initiative was developed by the NSW Government to help regional councils upgrade their old roads and bridges which cause freight pinch point or ‘last mile’ problems.

“There’s nothing worse for a local economy than roads and bridges not being up to the task of carrying freight in an efficient and cost effective manner.”

Mr Marshall said Armidale Dumaresq Council would be receiving $600,000 to seal a 1.6 kilometre section of the Rockvale Road, which joins the busy Guyra to Ebor Road.

“Council has been looking at this project for some time and this injection of funding now means upgrade can go ahead,” he said.

Inverell Shire Council will be able to replace the ageing Tin Tot Bridge between Graman and Ashford with a modern concrete structure thanks to $800,000 from the program.

“Tin Tot is council’s last remaining timber bridge in the Shire, so its replacement with a new and higher bridge is a huge achievement for council,” Mr Marshall said.

Moree Plains Shire Council will benefit from $700,000 to assist with widening the road seal on the important freight route between Moree and Croppa Creek.

“This road carries many millions of dollars’ worth of produce each year out of this region and the widening of the road will not only make it much safer for all motorists but also allow higher mass vehicles to be permitted to use the road,” Mr Marshall said.

Uralla Shire Council is celebrating the news of $705,000 which means it will be able to undertake another major bridge replacement on Thunderbolts Way, this time the Abington Creek Bridge.

“The bridge is an old and narrow one-lane timber deck bridge on a dangerous bend so its replacement will have huge benefits for the efficient transport of freight and goods through our region,” Mr Marshall said.

Mr Marshall said he was incredibly proud of the hard work carried out by all four councils to secure funding for these major projects.

“I congratulate these councils for their vital funding commitments, representing a genuine working partnership with the NSW Government,” Mr Marshall said.

Uralla Shire Council was successful in receiving $705,000 from the Australian Government under its Bridges Renewal Programme for its project.

“The remaining funding for the project will be delivered from the existing historic roads budget for regional NSW.”

Projects funded under Fixing Country Roads were selected purely on merit by an independent Assessment Panel made up of representatives from the NSW Farmers Association, Livestock and Bulk Carriers Association of NSW, Local Government NSW, Infrastructure NSW and senior officials from Transport for NSW Freight and Regional Development and the Office of Local Government.

Mr Marshall said this was a prime example of taking politics out of infrastructure funding; not to mention utilising the knowledge and expertise of recognised industry leaders from country NSW.

“The NSW Government is working closely with both local government and industry to reverse a $4 billion backlog in critical council-owned road infrastructure,” he said.

Mr Marshall said that if the NSW Government was re-elected then a further $500 million would flow to future funding rounds of Fixing Country Roads.

“This means those projects not selected by the independent Assessment Panel will get further opportunities for funding in the future,” he said.

Pleasingly, the additional funding includes $40.6 million of new money for regional NSW. It brings the total tourism and major events budget to over $643 million, which includes more than $190 million for regional NSW.

The additional $40.6 million for regional tourism is estimated to boost visitor expenditure in regional NSW by $96.2 million.

Mr Marshall said the 25% increase in tourism funding was a big win for rural and regional NSW.

“Local hotels, motels, restaurants and cafes throughout the Northern Tablelands can position themselves to get a chunk of the $96.2 million in economic benefits, which will create more jobs.

“Our local region has a variety of fantastic tourist attractions including the beautiful Ebor falls and gorges in the east to the natural artesian hot springs at Moree and variety of transport and art museums in between.

“This funding injection will give this vital local industry the extra competitiveness needed to continue to grow.”

Deputy Premier and Minister for Tourism and Major Events Troy Grant said currently one in five visitors to Sydney also visit the regions and the Government is focused on extending their stay.

“The state’s tourism industry is currently responsible for 158,000 jobs state wide and 68,000 regionally, which will increase with this additional Government funding,” Mr Grant said.

“We are proud of the performance of the NSW tourism and events sector, and we are optimistic that a lower Australian dollar and lower oil prices will create economic conditions for more growth and more jobs.

“This will allow us to show off and support the world class tourism destinations in regional NSW, especially the sub-sectors of food, wine, adventure and eco-tourism.”

“Together with the $110 million Infrastructure Fund and the $300 million Rebuilding NSW Fund, this regional tourism budget boost will unlock some of the world’s best tourism destinations, grow regional economies and create jobs,” Mr Barilaro said.

Round 3 of the Green Army now open in Parkes Electorate

Gravesend’s local birdlife to be captured on canvas

Next post
Gravesend’s local birdlife to be captured on canvas