Mr Marshall said the two vehicles were the first in a new program worth more than $2 million to rollout dedicated drug testing vehicles across regional NSW and make roadside drug testing more mobile and more visible. 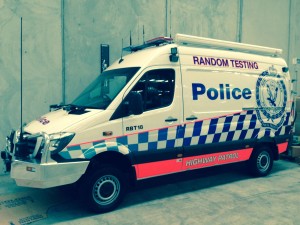 One of the new random drug and breath test vehicles which is now operating throughout Western NSW.

“The new purpose built drug testing vehicles – worth a combined total of $450,000 – are funded as part the Centre for Road Safety’s Community Road Safety Fund.

“The arrival of these new vehicles sends a very strong message to motorists in our region – if you drive under the influence of drugs you will be caught and punished.”

Deputy Premier and Minister for Police Troy Grant said the initiative was about getting unsafe drivers off the roads.

“We’re cracking down on drug driving right across our state and I’m pleased to announce these two new purpose built 4WDs are now operating in some of the most remote regional communities,” Mr Grant said.

“Drug driving is not only reckless and irresponsible, it’s illegal and those who get behind the wheel after taking drugs will be caught.

“We know that drug driving is a serious problem right across our state – with 1:13 roadside drug tests so far this year coming back positive.”

Mr Marshall said that around 16 per cent of all road fatalities involved a driver or rider with an illegal drug in their system.

“This is exactly why the state government has committed $4.5 million to help Police tackle this problem – providing them with more state-of-the-art technology and resources to test for illicit drugs,” Mr Marshall said.

“Roadside drug testing is being tripled to 97,000 tests by 2017 and the Police are working closely with the community to raise more awareness about the dangers of this kind of behaviour.”