THE original Ned Kelly Cup is back home where it belongs, perched proudly alongside a family collection of racing memorabilia owned by Chic Spriggs, whose father Kevin Hartin was the owner of Gunga Din, the inaugural winner of the infamous race.

The Cup was purchased by Chic’s son, top Sydney jockey Blake Spriggs, at a special fundraising night for Moree identity Red Lloyd, who lost his Yarraman home and all possessions in a tragic fire in early December.

The benefit night, held at Moree Services Club, was organised by Red’s life-long friends Casey Ryan and Deb Holland, and a big team of helpers.

The event drew more than 100 people who bid generously – and bought raffle tickets – on a long list of items donated by local businesses and individuals.

Around $9000 was raised on the night, with large cash donations still being collected.

Nearly $4500 has also been raised on a still-active GoFundMe page.

Spriggs is engaged to in-demand jockey Rachel King and, as she booted home a winning double at the corresponding Canterbury under-lights meeting last Friday, her fiance was on the phone, bidding several hundred dollars above his budget to secure the historic trophy.

When the bidding war ended, the Ned Kelly Cup was knocked down to Spriggs for $1100. 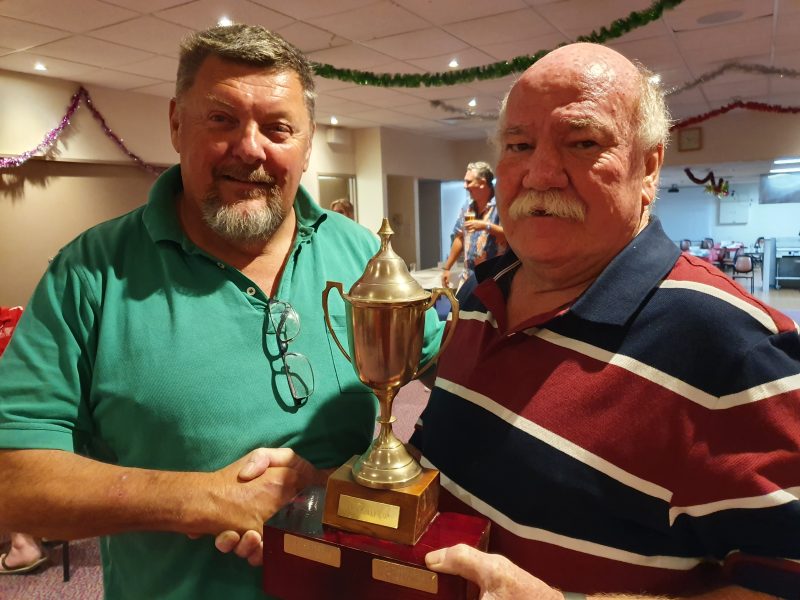 The trophy disappeared more than 20 years ago before being spotted just over 12 months ago at a garage sale at Kelly’s Gully, near Warialda.

It was lovingly cleaned up and re-plated by Moree jeweller Steve Sparke and is now home where it belongs.

“It was pretty emotional once I got off the phone, knowing the story behind grandpa’s win in the first Ned Kelly Cup – after all, it was a ring-in,” Spriggs chuckled.

“It brings a smile to my face because although doing something like that is not necessarily right, it shows the cheeky side of grandpa and it’s something that was a big part of his personality for the people that knew him.

“It was very special, and mum was very pleased, and she’ll have it at home with the race-book she kept from that day.

“Mum’s also got a photo of grandpa with Gunga Din and I’m sure the trophy and the photo will sit alongside his colours,” he said.

Hartin won the first Ned Kelly Cup – there were only two editions – with Gunga Din in May, 1982 under Runyonesque circumstances.

Ridden by former leading Canberra apprentice Selwyn Hall, Gunga Din raced clear to score an easy win on a makeshift track at The Rocks, a recreational reserve around 10km north of Moree.

Spriggs, who cut his teeth at Gravesend and Moree pony camps before following in the footsteps of his father, retired jockey Dale Spriggs, said securing the Cup meant a lot to his family.

Spriggs said he initially intended bidding to $500 for the coveted trophy.

“To be honest, I only planned to go to about $500 but when I was on the phone bidding I realised that the auction was obviously for a very good cause,” he said.

“I was sitting at home in my lounge-room with a roof over my head watching Rachel kick home winners at Canterbury.

“Red is going through a pretty hard time, so I was more than happy to show that I could help out wherever I could.”

Auctioneer Col Pring kept the big crowd entertained throughout the night. He said the town of Moree once again came to the fore when the chips were down for one of its own.

“Moree showed its ability to help a mate, with so many individuals and businesses donating great items to be auctioned or raffled for Red – well done Moree,” Pring said.

“One auction item is even making its way to Manchester in the United Kingdom.

“What a great night. A heap of friends got together and dug deep for a good mate.

“I thoroughly enjoyed draining the pockets of poor, unsuspecting people on the night,” Pring laughed.

Co-organiser Casey Ryan said the fundraiser was a huge success given it was held so close to Christmas during a pretty tough time for the drought-affected Moree district.

“It was a very successful night, and a big thank-you goes out to Col Pring for donating his time as auctioneer,” Casey said.

“We ask everyone to please support all these local businesses. They always support in times of need in the Moree community, despite tough economic times and a shocking drought.”

Author’s note: Following is my recollection of Gunga Din’s Ned Kelly Cup win, one of the most memorable days I’ve ever spent anywhere.

It was a glorious autumn day in mid-May.

A couple of months’ prior, members of the Ned Kelly Bar Social Club sat down for the club’s annual general meeting.

And, from that historic summit, the inaugural Ned Kelly Cup for stockhorses was born.

It was decided the race, an 800m scamper, would be held at The Rocks, a recreational reserve at Boolooroo just a few miles north of Moree, and would have strict rules and guidelines.

How many 18-gallon kegs would be needed?

Would three temprites be enough?

After much discussion, club members went their separate ways, chiefly to try and work out how to rig the race to their own advantage.

Had Ned Kelly been around in 1982 he would’ve steered clear of the meeting for fear of being pinched for consorting.

I was appointed chief stipendiary steward, which gave me a clear edge over fellow club members.

However, no-one in this select group of well-known racing identities had factored in a bloke by the name of Kevin Alwyn Hartin.

Kevin was old-school – a racing man through and through.

He owned and trained countless racehorses down through the decades.

He loved a punt, he loved a beer and he loved a laugh – and when those three ingredients merged, magic often happened.

Nominations trickled in for the inaugural running of the Ned Kelly Cup and, as chief steward for the meeting I ensured all entries strictly adhered to race rules and policies.

One nomination did take my eye, however.

It was pencilled in at the bottom of the list, almost as an afterthought.

The horse was listed as an aged gelding, owned by Kevin Hartin and to be ridden by Selwyn T Hall – better-known as “Tom T” to his friends.

I’d known Kevin all my life and knew that he knew his horses.

I’d known Selwyn for quite a while as well. He was a former gun apprentice from Queanbeyan before weight caught up with him.

At the time of the Ned Kelly Cup he was one of the best trackwork riders at Moree racecourse – if not the best.

One didn’t need to be Flicka to figure something was afoot.

On the eve of race-day it was decided that to run the Ned Kelly Cup, a racetrack would need to be created.

So, on race-day eve  a working-bee committee made its way to The Rocks with a trusty old Valiant ute, a set of harrows and some steel mesh to mark out an 800m straight course. 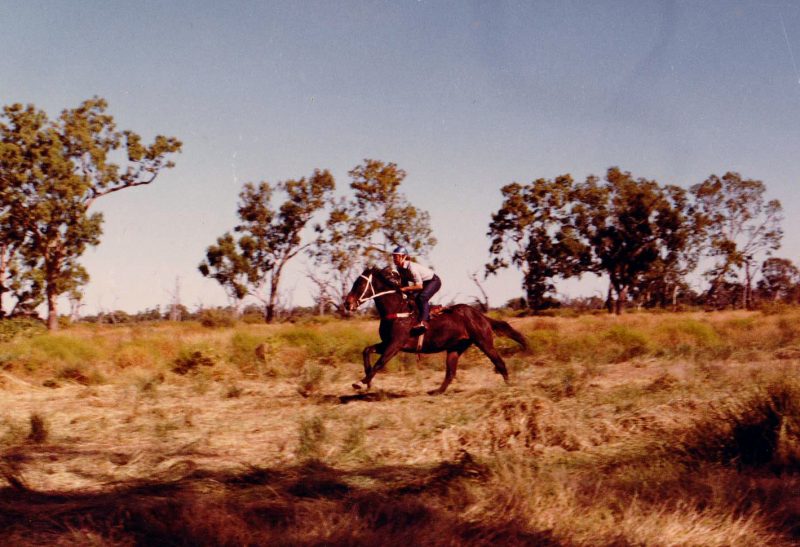 The track was no Flemington, but it would do.

About mid-afternoon a glint of chrome emerged through the trees.

A gleaming white Land Cruiser negotiated the last cattle ramp to The Rocks and crunched to a stop just near our newly erected finishing post.

Kevin Hartin stepped out from the vehicle and surveyed the scene.

It was at this very moment I made a mental note to ensure I had plenty of cabbage the following day to back Gunga Din.

There would be two bookies on course – Gary “The Hat” Skaines and Pat “The Pencil” Picone. Getting set by these two leviathans of the turf would not be a problem.

“How’s everything going,” Kevin asked innocently, as he cast his experienced horseman’s eye across the newly-laid racetrack.

“We’ve just about got everything finished, Kev,” I replied.

“My old horse will be lucky to run a place, even 800m might be too much for him,” Kevin said.

I made a mental note to double my bet the following day.

On race-day morning there were just four runners declared for the inaugural Ned Kelly Cup.

I made a mental note to increase my bet threefold on Gunga Din.

The weather that historic day was fine and sunny; the track rated “fast” with the running rail in its true position. 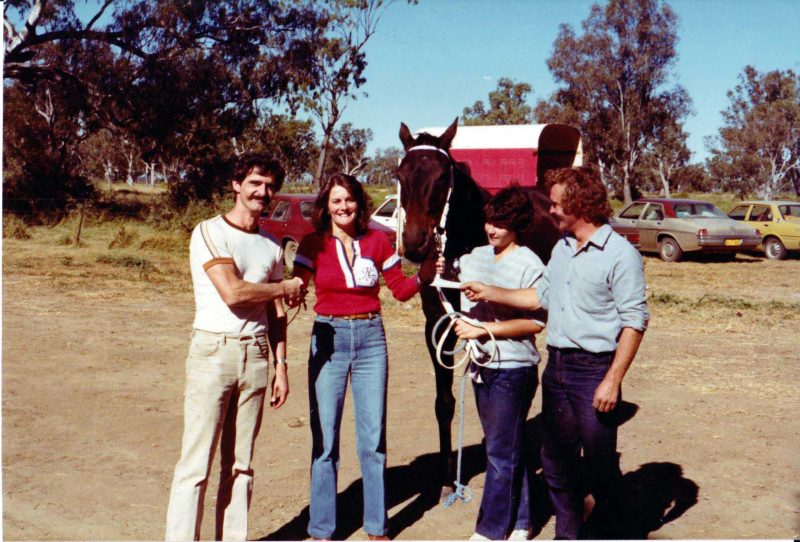 Everything looked set for a racetrack killing.

Jockeys Bowen, McNamara and Gibbons, all in “big” saddles, rode their mounts from Moree to The Rocks – a six-mile canter as the crow flies.

Gunga Din, with a two-pound jockey’s pad strapped to its back, arrived in a brand-spanking new Olympic horse-float that would not have been out of place at the unloading dock at Royal Randwick on Doncaster Day.

It was being towed by that same gleaming white Land Cruiser that had arrived unannounced at the working bee the previous day.

It was then I decided to quadruple my bet on Gunga Din.

Betting on the Ned Kelly Cup was brisk and, surprisingly, there was plenty of 5-2 about Gunga Din. The street-corner tip was for Leone Bowen’s mount Smileakyle, but by post time Gunga Din was a raging threes-on favourite.

Money poured on from all quarters – including the stewards’ room.

Race starter Buck Timmins, with a red flag in one hand and scotch, ice and water in the other, called the four runners into line for the inaugural running of the Ned Kelly Cup and, after much fidgeting by those brave, yet nervous steeds, dropped the flag and said “Go!”

The race soon became a procession. Others, with keener eyes, called it a “farce”.

The further the field went, the further Gunga Din got in front.

The official margin was “distanced”.

In fact, winning rider Selwyn Hall was on his second beer by the time Leone Bowen on runner-up Smileakyle flashed past the post. 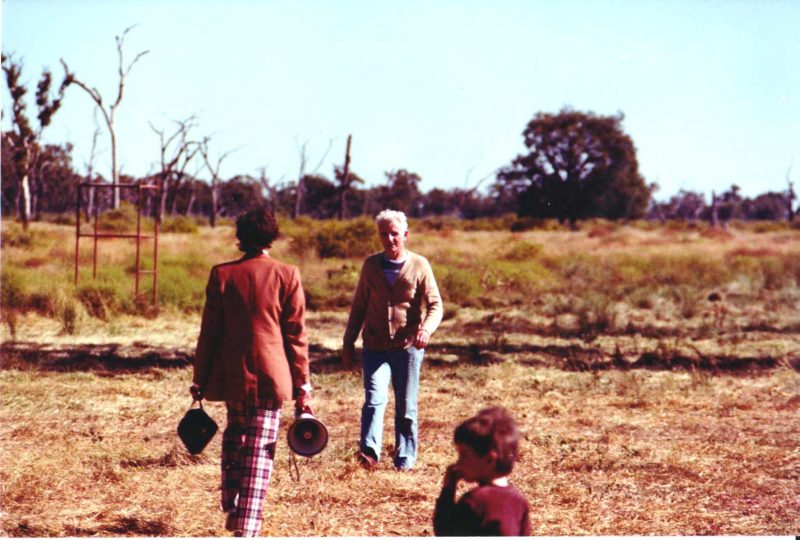 Ian Bowen, owner of runner-up Smyleakyle, fires in a protest to steward and race-caller Bill Poulos.

Just as I was about to call correct weight (and collect my winnings), the best-laid plans almost came unstuck.

Ian Bowen, the owner of Smileakyle and father of jockey Leone, emerged from the crowd – and he was absolutely ropeable.

“The winner is a racehorse – it should be disqualified!”

A protest by the runner-up was lodged against the winner and it was left to me, as chief stipe, to adjudicate proceedings and make a final judgement – all while two betting slips worth quite a bit of money were burning a hole in my top pocket.

The entire situation was hotter than a wok in Dixon Street.

After much discussion with Kevin, and to the approval of Ian Bowen, who had by this time calmed down considerably, it was agreed that placings would stand.

The $100 first prize money however would be given back to the Ned Kelly Bar Social Club to be donated to a local charity of Ian Bowen’s choice – hence the two photos of the first Ned Kelly Cup presentation.

In the Ned Kelly Cup archives, there is a photo of Gunga Din’s connections accepting the winner’s cheque . . . and another of them handing it back.

The 1982 Ned Kelly Cup was a moment in time that would not have been out of place in a Banjo Paterson poem – had Banjo believed the events that unfolded that day – and I’m so glad Kevin Hartin was a part of it.

It is one of my fondest memories of Kevin and even up until a few weeks prior to his death he would still chuckle about the shenanigans that took place on that hilarious Sunday afternoon at The Rocks.

Kevin owned and trained a lot of good horses over the years, but, without doubt, his most notorious – and memorable – was 1982 Ned Kelly Cup winner Gunga Din.