NATHAN Sinclair found himself between a “rock” and a hard place over the Easter long weekend.

The popular Moree racehorse trainer won the time-honoured Dale Bruce Memorial Lightning Ridge Cup (1200m) on Easter Saturday with much-improved mare Ready To Go Go and shortly afterwards there was a bit of a bun-fight about who would get the black opal trophy – a glittering bracelet with an estimated value of $20,000.

Vying for ownership honours were mum Jenny and sister Jorja but when the Lightning Ridge opal dust settled, it was Jenny that raced clear with the green-blue on black opal set in a hand-made 18k diamond-encrusted white-gold bracelet, created by Lost Sea Opals.

The win was never in doubt.

Jenny’s windfall that is, not Ready To Go Go’s easy victory.

“When Nathan got home from the races he just handed it to me and said ‘here mum, this is yours’,” Jenny smiled

“This is the most expensive piece of jewellery I’ve ever owned – I’ll have to take it everywhere with me so nothing happens to it.”

Jorja turns 21 on May 5 and thought the milestone may have swayed her big brother – might have got her over the line. 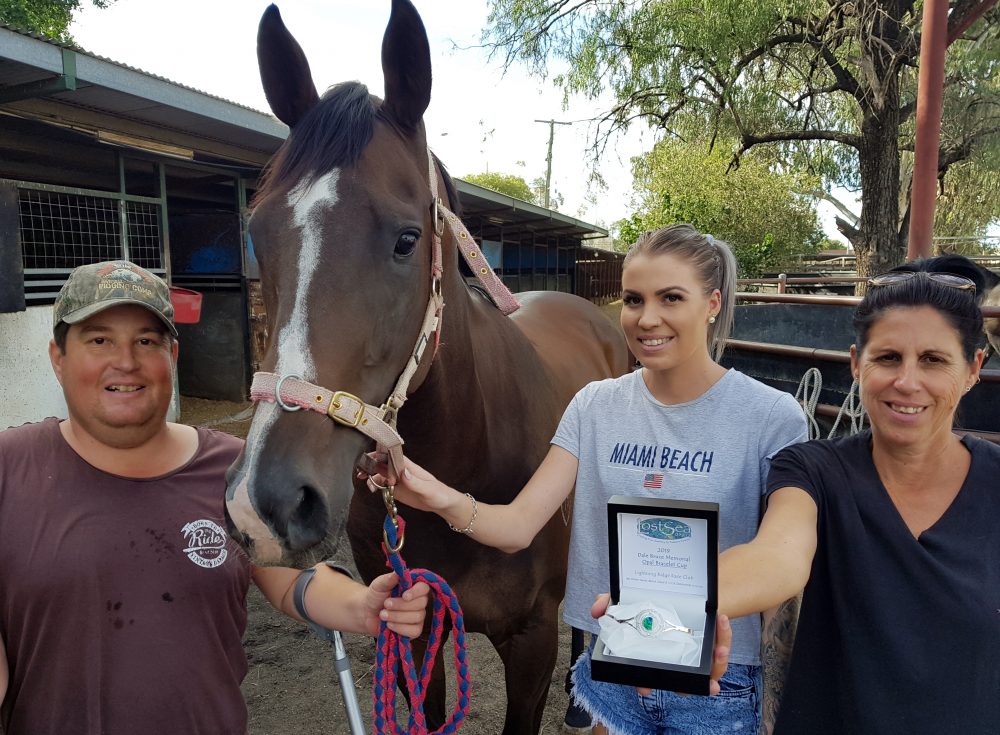 “My birthday is coming up in two weeks’ time and I thought Nathan might give it to me, but it doesn’t look that way – mum got it straight away,” Jorjo laughed.

Ready To Go Go (5-2), with Brooke Stower on board, may now head to bush racing’s Golden Triangle in the coming months after racing clear at Lightning Ridge to beat Upstart (4-1) and Smart Attire (7-1) by one-and-a-quarter lengths. 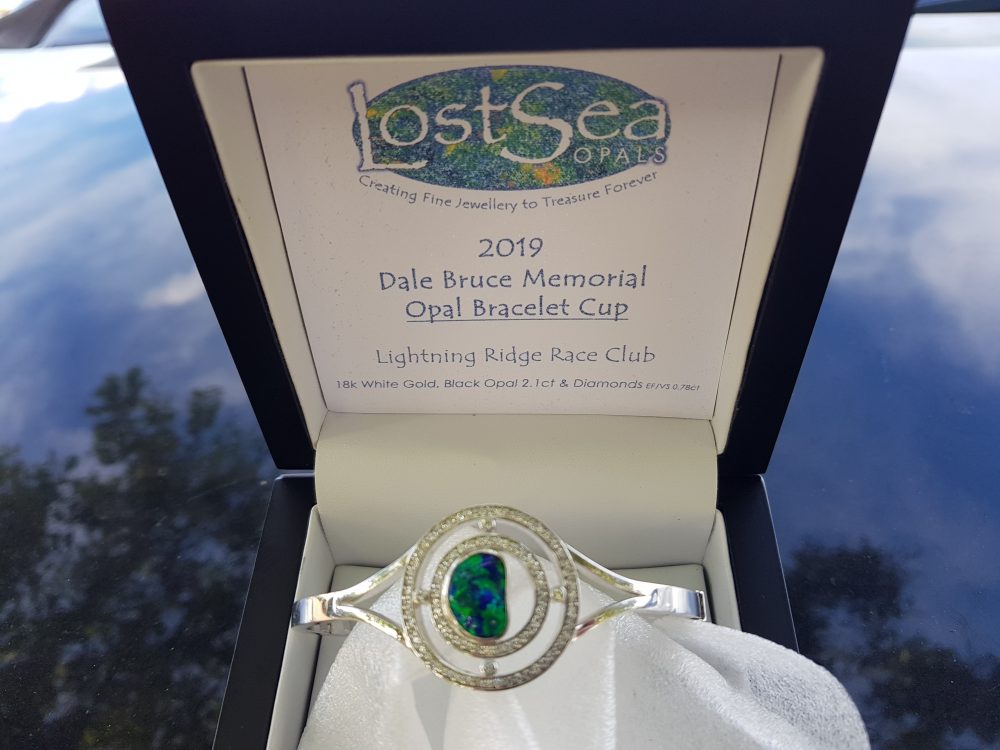 “Dad (Peter) did mention a highway handicap (after Goondiwindi) but there were a few drinks involved that might have influenced the conversation – he did have me thinking about it, though,” Nathan said.

“The run at Goondiwindi was good. She got trapped behind a couple of horses and had to come out and around them. If she had got the run between them, she wins.

“I was fairly confident (about winning at Lightning Ridge) but I was just a bit worried about the track. “She’d never been on dirt and I could tell during the run that she really didn’t handle the going until she got to the grass in the straight,” he said.

Ready To Go Go, a back-marker with a big finish, raced just off the speed at Lightning Ridge before racing clear in the run home.

“She raced a lot closer to them this time,” Nathan said.

“She normally gets a long way back and once she got on to the turf, which is only the last 150m, she got going and won fairly easily.

“It was a very good ride by Brooke. It was the first time she had been on the horse and I wouldn’t hesitate to put her back on,” he said.

Ready To Go Go will now head to Gunnedah before a likely campaign on the north-west picnic racing circuit at Moree, Mallawa and Talmoi in May-June.

“I’ve got a race in mind at Gunnedah in a few weeks’ time, but we’ll just see,” Nathan said.

“She’s won over 1400m  and ran second at Quirindi over 1450m and one of the ideas that we’ve got is to try for the picnic cups (on the Golden Triangle)  to get her into the big picnic final at Dubbo.

“We think she’d be the perfect horse for that,” he said.