MOREE’S fitness fanatics can now grind out their daily gym sessions in the open air.

Northern Tablelands MP Adam Marshall on Thursday announcing new outdoor exercise equipment had been installed, as part of a $502,554 project to rejuvenate the Mehi River Corridor.

Mr Marshall said not only had council succeeded in beautifying the area and making it a feature of the community, but it had also made exercise more accessible to locals and visitors.

“For some, just finding the motivation and time to be active can be hard enough without the added cost of gym memberships or buying at home equipment,” Mr Marshall said.

“Across the region, local councils have successfully eradicated that financial barrier by installing outdoor gym apparatus, which is accessible any time of day and has instructions for its users to get the most out of their workout.

“This new static equipment, located opposite Kirkby Park, is the only work out station of its kind in the Moree Plains and has been strategically positioned in respect to the town’s popular Park Run track. 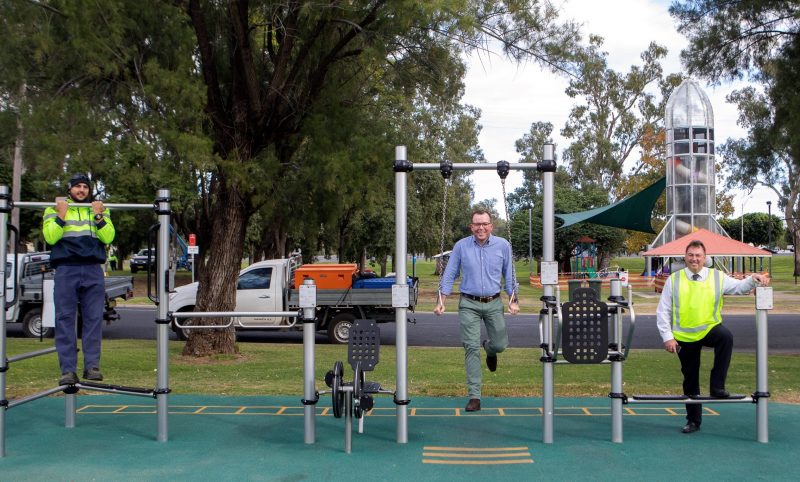 “It’s great to see the community was given input into the design, with the six pieces of exercise equipment installed, chosen by public vote.

“Unfortunately, due to COVID-19 social distancing and hygiene measures, this equipment is not yet open to the public, but council is working through what measures need to be taken to ensure it is safe for use as soon as possible.”

Mr Marshall said several other components of the Mehi project were also complete.

“The Mehi River, which runs through Moree, really is a feature which should be enjoyed by the entire community,” he said.

“To improve access to the river a number of shared pathways have been put in, including the Broadwater Bridge pathway, Jellico Park pathway, Bloomfield Oval pathway and Perl French Grove pathway.

“Bollards and pedestrian barriers have been installed in sections to improve safety, while the stairs at Bloomfield Oval have been converted into a ramp to enable cyclists, prams and runners continuous access.

“It depicts a variety of local images and will act as an additional focal point to draw people down to the Mehi.

“I commend Moree Plains Shire Council for taking such a proactive approach in encouraging its residents to get active and enjoy their natural surrounds.”

Share
Share:
Moree Junior Cricket Club in line for national award after being named Cricket NSW Club of the Year