LOLA Shearer may shun the spotlight, but few could rival her dedication to Moree and now the long-time healthcare advocate has been formally recognised by the NSW Government for her decades-long commitment to the community.

Member for Northern Tablelands Adam Marshall recently visited Lola in her Moree home and presented her with a certificate commemorating her addition to the NSW Hidden Treasures Honour Roll, describing the Hidden Treasure as a “pillar of the community”. 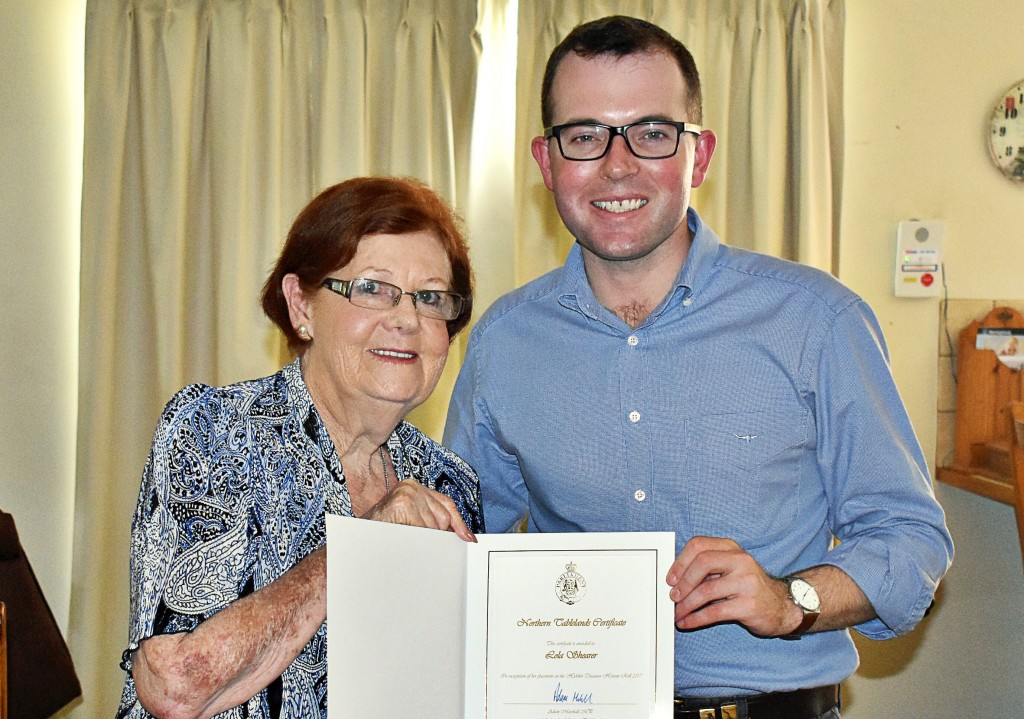 “The Moree region owes Lola its sincerest thanks for her tireless work to improve community health,” Mr Marshall said. “In my view, she is a true community champion.

“Lola was one of the founding members of the Moree Renal Support Committee, a group which through raffles and concerts has raised in excess of $300,000 – nearly $400,000 – since its formation in 2001.

“Through the hard work of Lola and the other committee members, patients around the region now have access to a wide variety of treatment and support that would not have been available in town.

“Originally starting with two machines, over the past 16 years Moree’s renal unit has expanded to five machines with the capacity to treat 10 patients per week. Continued fundraising has allowed for maintenance, which would not have been possible without people like Lola.

“Lola thoroughly deserves this recognition and should be extremely proud of her nomination and in joining this prestigious list of highly regarded rural women.”

Ms Shearer was humbled by the accolade, thanking the “incredible generosity” of the Moree people.

“People are over the moon with the expansion – there were people coming from Moree to Tamworth, it was too much, especially at a difficult time,” Ms Shearer said.

“We want to make sure that no one has to go out of town. Three hours away and three hours back – we don’t want anyone to have to leave our town for essential medical visits.”