FORMER international cyclist turned-super-coach Shane Sutton – one of Moree’s favourite sporting sons – is locked down with his family in Spain, as countries around the world unite to eradicate COVID-19.

Spain on Wednesday reported 738 new deaths in one day – surpassing Europe’s epicentre Italy (683) for the same period – and 655 new deaths on Thursday.

The spiralling death-toll comes as Spain enters its 13th day of full lock-down in an attempt to rein in the COVID-19 epidemic that has to date infected more than 55,000 people across the country.

Sutton, who from humble beginnings in Moree, cycled his way on to the world stage, was in his hometown late last year over the Christmas break to visit family, and to attend a fund-raiser for good mate, Stephen ‘Red’ Lloyd.

Sutton says he is absolutely gobsmacked at how the world changed so rapidly in just a matter of weeks.

“Since our last visit at Christmas, it seems crazy to think how much has happened already this year,” Sutton said.

“Having seen so many of all our old friends at Red’s fundraiser, I’d hoped the bad luck of 2019 was over and this year would be more positive for everyone.”

Sutton, who with his brother Gary won Gold for Australia at the 1978 Commonwealth Games, was working with a cycling team in a province in mainland China for most of 2019.

He was due to return to China in February.

“In January I was advised that so many people, and the cyclists I was working with, were being put in lock-down and weren’t able to travel back to their families for Chinese New Year,” Sutton said.

“People were being told not to leave their houses and races were being cancelled.

“This was our first insight into Coronavirus, but once we started to see the news break, we could appreciate how bad it was . . . thousands of people lost their lives.

“I was meant to leave for work in China in February and follow that trip with another in April,” he said.

“Needless to say, February didn’t happen and April won’t, either. It’s been horrible speaking to colleagues in China and understanding how scary this has been for them.”

Sutton said the rapid increase in deaths and infections across Europe have been frightening.

“In more recent weeks, we saw a massive rise of cases in Italy which subsequently made the Spanish authorities begin to look at the proximity between countries and take stock,” Sutton said.

“With Europe being so easily accessible, the number of flights and the movements of people become very worrying when you hear of a virus spreading so quickly.

“The number of cases in Spain soared. The government decided to take action, and rightly so,” he said.

Sutton, his wife Abbie, and their three-year-old daughter Florence, are locked down in their apartment on Mallorca (English Majorca), the largest of the Balearic Islands in the Mediterranean Sea.

“The number of cases here is quite low but as a Spanish region, we follow the Spanish government’s decisions and therefore 12 days ago we were put on lock-down,” Sutton said.

Just a few days prior to the national lock-down, the Spanish population was told all schools would close for 15 days.

A total lock-down was put in place on Sunday, March 15 – a last-minute change from the original March 16 commencement date.

“Communication of this last-minute change was poor and as Abbie and Florence headed out that morning on their bikes, they were quickly met by the Guardia Civil and told to return home and stay indoors,” Sutton said.

“Since then, we have been at home. We are allowed to leave the apartment to go to the supermarket for food supplies or the pharmacy for medication.

“We are only allowed to go out individually – not as a family – and not permitted to go out for any exercise.

“Anybody with a dog has been told they can go outside to let their dog ‘relieve’ itself but this should be within close proximity of your home and this is not a ‘walk’,” he said.

When visiting supermarkets, shoppers are asked to sanitise hands and wear protective gloves provided, with shops operating on a one-in, one-out policy.

“Supermarket staff members are working hard to keep the shelves stacked and we have been assured food supplies will not run low and will be replenished nightly,” Sutton said.

In a heart-warming show of national unity, each evening at 8pm, families stand outside on balconies to applaud doctors, nurses and medical staff working tirelessly to save lives while putting their own at risk.

“Communities are coming together in times of need but the isolation is very real,” Sutton said.

“The streets are silent and people are indoors. We have explained to Florence that lots of people are getting sick and we must stay indoors and that the doctors are trying to make them better.

“We’re trying to entertain Florence daily from the confines of our home instead of enjoying the great outdoors – we have a beautiful beach on our doorstep,” Sutton said.

“So far Abbie and Florence have baked, painted, decorated eggs for Easter, made cards, done PE lessons in the garage and planted seeds in the garden,” he smiled.

“Keeping some structure and being creative with what we have around us has been crucial.” 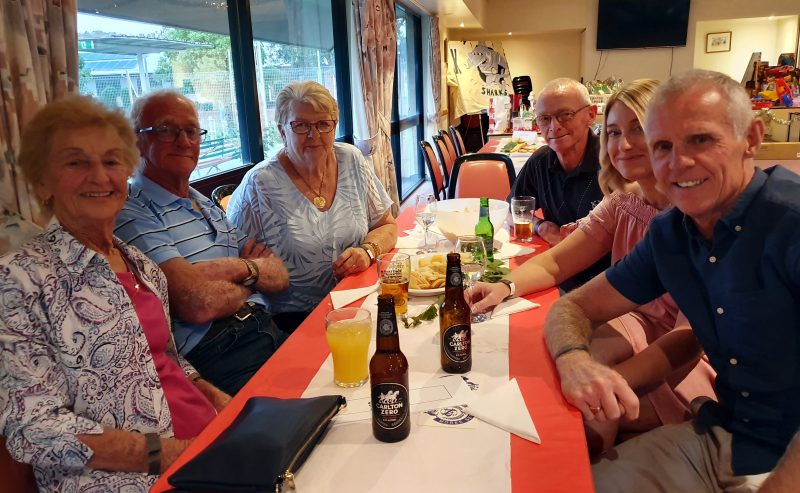 His family cannot have ‘time-out’ from the house and constant reminders of events in the ‘outside world’ are increasingly worrying.

“With family in the UK, we follow the news closely and only three days ago they were also instructed to go in to lock-down, with those over 70 told to self-isolate for 12 weeks and everyone else for three weeks initially,” he said.

“Our friends and family in the UK have been told they can leave the house with other members of their household – so long as they social-distance – and can carry out one form of exercise outdoors each day.”

Sutton said preparations undertaken to shut down schools and prepare students have been immense.

“Students have been told they won’t sit their exams this year. Anyone in their final year will not return and will be given a ‘predicted grade’,” Sutton said.

“Here in Mallorca, and in the UK, the borders are closed and only essential travel in or out is permitted.

“Currently, we have been told we must be on lock-down for a month but we wait for regular updates and pray that things will improve and the restrictions will become lighter,” he said.

After retiring from professional cycling, a career that saw him win the Herald Sun Tour and the Bendigo International Madison with his brother Gary in 1983, Sutton coached with Welsh Cycling before joining British Cycling 18 years ago.

He is also one of seven coaches to win a High Performance Coach of the Year Award and was made an Officer of the Order of the British Empire (OBE) in the 2010 Queen’s Birthday Honours List.

Sutton says he is forever thankful he can communicate with family and friends in Australia, especially Moree.

“My mum, aunties and uncles all still live in Moree and I’m very grateful for the internet and being able to stay in touch with everyone and hear regular updates,” Sutton said.

“Mum has underlying health conditions – putting her in the vulnerable category – so it’s ever-more important for me to keep in touch with everyone to know she is well.

“Mum is now isolating and we appreciate her usual visitors keeping their distance, but luckily she has a good network of family and close friends that she speaks to daily,” Sutton said.

Sutton says Australia “appears to be around two weeks behind us” as States close borders and the country awaits a possible full lock-down similar to Spain and Italy.

“I only hope things don’t pick up pace in Australia and that Moree stays well-protected,” Sutton said.

“I’m sending my best wishes and love to all my family and friends and I beg them all: please look after yourselves,” he said.