THE outstanding contributions that women make to their local rural communities were recognised on International Day of Rural Women, with Minister for Agriculture and Member for Northern Tablelands Adam Marshall unveiling the 2020 NSW Hidden Treasures Honour Roll.

Mr Marshall said in a year of unforeseen challenges, women volunteers in rural areas had selflessly and tirelessly donated their time and today was an opportunity to celebrate that.

“We never could have anticipated what 2020 would bring, but today we are recognising a number of women who have gone above and beyond to the benefit of their communities,” Mr Marshall said.

“The Hidden Treasures Honour Roll is an annual initiative from the NSW Government’s Rural Women’s Network that tells the stories of women volunteers, and promotes their valuable role to local charities, organisations and businesses.

“Volunteers are heroes in the bush, and the celebration of these nominees is an important part of ensuring their tireless work is respected.

“This year 104 women have been recognised by their communities in this important publication, bringing our total nominees to more than 1000 since the Honour Roll first launched in 2010.”

In the Northern Tablelands, eight local women have been recognised and added to the Honour Roll.

“I have seen first-hand the way these eight women support one another and give their own time so often to improve the lives of others in their local communities,” Mr Marshall said. 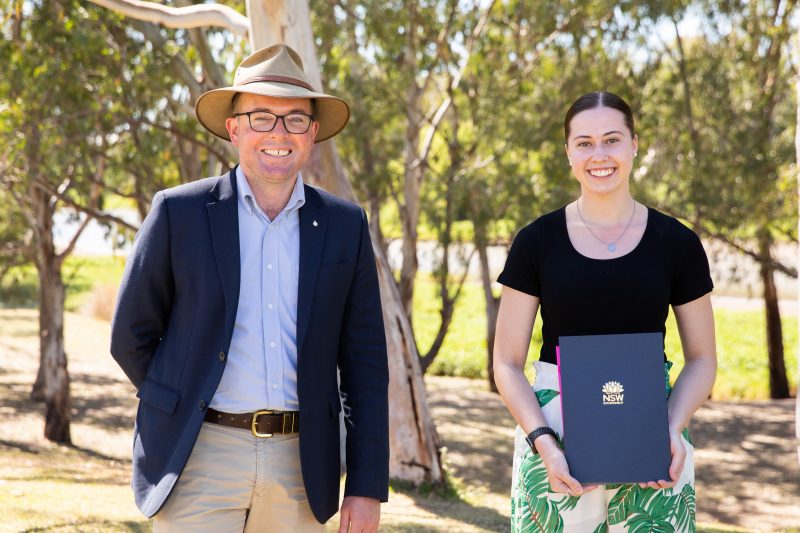 “It’s no exaggeration to say that without these eight women, our rural communities would be much poorer.

“These awards are a great way of acknowledging these women for their generosity and selflessness in volunteering and helping our communities recover and thrive.”

Elka has dedicated her spare time to her community and is passionate about ensuring rural youth have the same advantages, opportunities and access to services as those in metropolitan areas. Some of her achievements include: 2020 Moree Young Citizen of the Year, 2019 ABC Heywire National Youth Summit Representative, 2019 UNICEF youth living drought summit. Elka volunteers countless hours to other local events, charities and organisations including the local Lions and Rotary Clubs and Physical Culture Club.

Karen and her husband Hamish support various local organisations with their time and commitment. Examples of Karen’s generosity to her communities of Yallaroi and North Star, include many hours of grant writing for North Star School P&C Association and a long involvement as a parent, Secretary and President of this organisation.

After only a short time in North Star, Jayde became a volunteer at the local Primary School tuckshop and later became the Canteen Coordinator/Treasurer of Canteen. Jayde undertook this role with professionalism, care and efficiency, often going out of her way to make sure it ran smoothly.

Lyn is a keen gardener and works tirelessly to replant the rivers edge with grants from local Landcare. Lyn is a volunteer Rural Fire fighter and Treasurer of the Wytaliba Brigade and has been in this role throughout the devastating drought and recent fires. She also raises money for the school P&C through grant writing and cooking for the markets.

Shortly after arriving from New Zealand, Kama joined the P&C Association of North Star Public School and volunteered as a cooking canteen Mum, Vice President and ultimately President of this association. She is also a member of the North Star branch of CWA of NSW and has volunteered as Treasurer of the branch.

Gwen’s involvement with the local Anglican Parish Council includes the active roles of Parish Council Member, previously Women’s guild contribution and active fundraising support of the parish. Gwen has also served as secretary of the Women’s Auxiliary in earlier years of the local Bushman’s Carnival (a horse sports and social event held annually at North Star) and the agricultural and environment officer role for North Star Branch, CWA of NSW.

Jessica has been a long term member of Girl Guides/Brownies. She has volunteered in fundraising and social functions of Gwydir Mobile Preschool (Croppa Creek Group) and Tharawonga Mobile Preschool (North Star Centre). Jess is also secretary of Croppa Creek Parents and Citizens Association.

Described as a generous soul, Pam has given her time to many organisations. These include Girl Guides, Brownies, reading at the schools, community radio (hosting a girls talk back session regularly) and contributing her own skills in voice-over ads.

Next post
Raft of charges after large-scale Inverell drug-bust