MOREE couple Michelle Mitchell and Wayne Monckton are always just a little bit edgy on race-day – especially when California Raider, a horse they part-own, is racing.

And it’s not the usual pre-race butterflies that make them just that little bit jittery – it’s their race-day job descriptions.

It’s his duty to call the numbers across the line – aided by a photo-finish camera – and declare the margins.

It’s one of the most important jobs at a race meeting and must be carried out with pinpoint accuracy.

Wayne must also declare an interest, whenever California Raider is racing.

She’s the person that gets the perfect race finish image that is later framed and detailed for winning owners.

Michelle must be firmly focused on the winning post; her trusty Nikon D3 positioned perfectly to capture the finish.

But when Michelle hears the race-caller scream “and here comes California Raider”, her heart jumps – her camera doesn’t.

“When California Raider is racing I get very nervous and try to contain it as I have to get that ‘money shot’,” Michelle laughs. 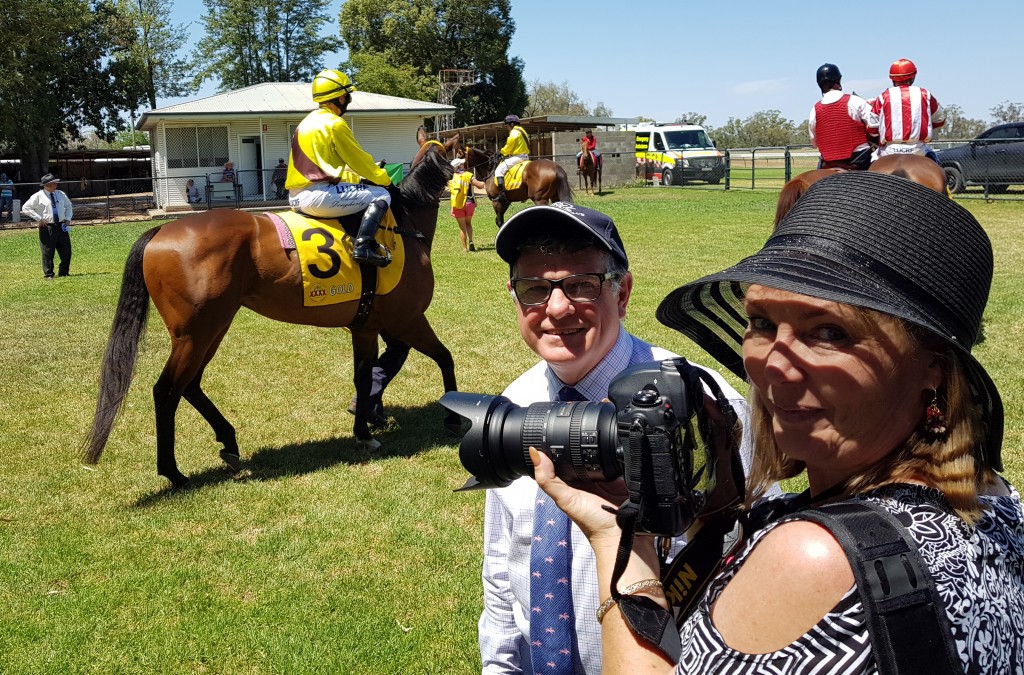 “I try not to move.  It’s all very exciting having an interest in a horse but it goes to the next level when he is racing.”

At the recent Moree twilight Christmas meeting Michelle was in her usual spot right in front of the winning post.

So was half the 5000-strong crowd of revellers, it seemed.

“I was up on my little stool and ready for California Raider’s race,” she said.

“The horses were coming down the straight and California Raider was coming into it. There I was trying to get the shot – and I was knocked off my stool!”

Michelle, an avid snapper for more than 30 years, took on the role of race-day photographer in October.

“We travel around the north and north-west every second weekend on average and we have recently been to Armidale, Quirindi, Gunnedah and Inverell,” she said.

She also has a Facebook page – www.facebook.com/shelleymphotgrapher1966/ – displaying her favourite shots.

“I have been entering the GuruShots photo competition for the last three years,” Michelle said.

“It’s an ongoing competition where your work is voted on by your peers. The Facebook page has photos I’ve taken over the last three years – as long as I’ve been involved with racing in Moree.”

Wayne, who first entered thoroughbred ownership about 10 years ago with good mates Darryl and Lester Rodgers, has been on the MRC committee for four years.

Wayne says he always has his heart in his mouth when he’s high above the race-day crowd and watching intently.

“If California Raider isn’t in the first four when the field is racing I stop looking for him and concentrate on the job at hand,” Wayne said.

“As a judge I only need a margin, but a good photo from Michelle makes half-a-length look more like a short-half-head,” he chuckled.

Michelle will again be on edge at Inverell races on Boxing Day – taking images for Bradley Photos –but Wayne gets a reprieve from judging duties.

“I’ll be having a day out this time,” he grinned.

California Raider has drawn perfectly (barrier 1) in the 1200m Goodwood Cup, a race Wayne won in 2013 as a part-owner of grand old galloper Playa.

He does, however, tumble to just 53kg after apprentice Mikayla Weir’s 1.5kg claim is utilised.

Trainer Peter Sinclair said California Raider could race on both days of the Inverell carnival – Boxing Day and New Year’s Day – if plans fall into place.

“His run at Moree (when fourth) wasn’t too bad but he has been a little bit disappointing this preparation,” Sinclair said.

“If he gets through Boxing Day okay and runs a nice race, he’ll probably step up to 1400m on cup day.

“All going to plan, we might even step him up further after those two runs – up to 1600m somewhere and maybe even one of those 1900m races at Armidale,” he said.

Are you interested in taking a bus from Moree to the Inverell Cup meeting on New Year’s Day?

A coach to take to the races is being organised, and the cost will be minimal.

At this stage it will be less than $20 per person with the final cost calculated on how many people hop aboard.

It will leave the Moree Golf Club Heber Street front entrance at 10.30am sharp and also pick up passengers along the way at the Pallamallawa turn-off, Gravesend, Warialda and Delungra. 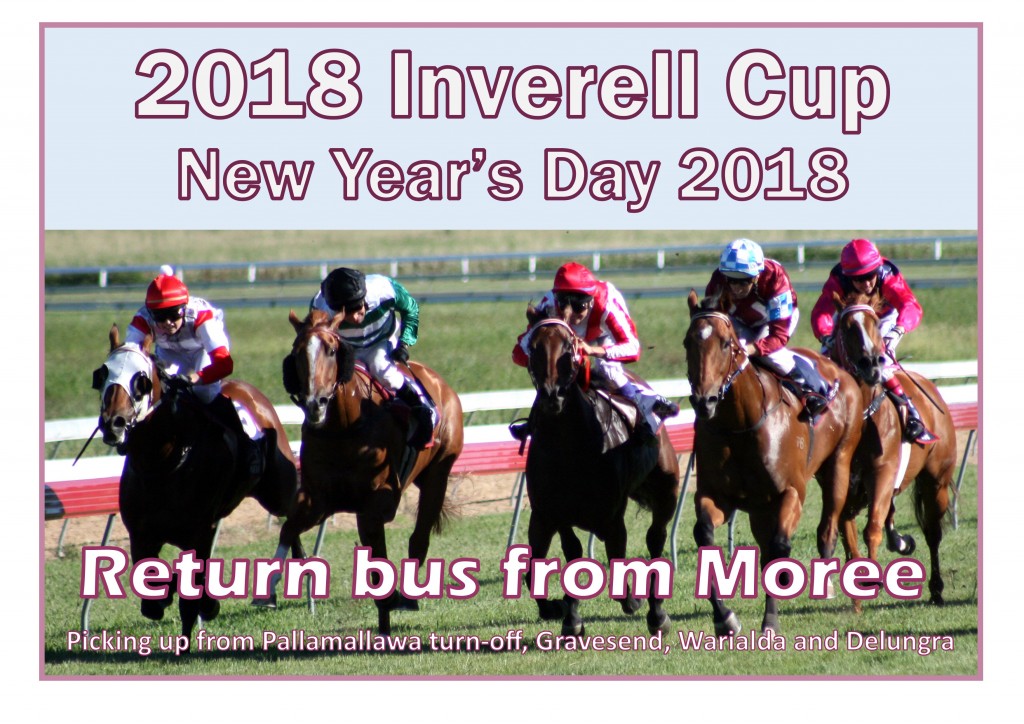 Next post
The good, the sad and the bad: July-August in Moree, 2017