BEN Williams believes the Wests Entertainment Group 9s is “good for the Group”.

The 27-year-old Williams, who travels in from Moree each week to play in the inaugural WEG 9s for the Carey’s Freight Lines team, thinks the 9s can only help Group 4, and it’s clubs and players in what has been a horror period due to the Covid-19 pandemic.

He grew up in Moree, went to school there and signed with the Gold Coast Titans straight out of school. 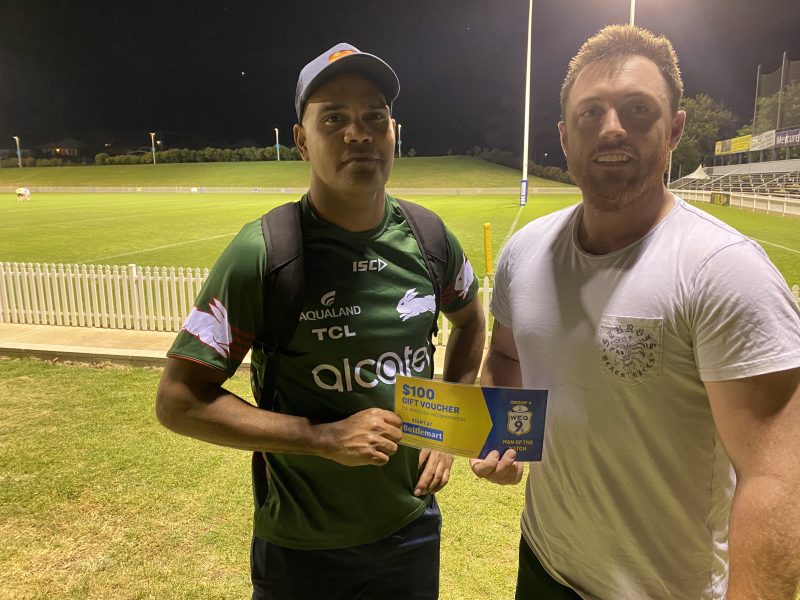 After three years on the Gold Coast Ben returned to Moree and played for the Boars in Group 19 but broke his jaw last year and was looking forward to playing with the Boars in the expanded Group 4 this season until Covid-19 hit.

“Didn’t play much last year because of the broken jaw,” Ben said Saturday night after snaring a Bottlemart Man of the Match Award in his side’s come from behind win over JT Fossey.

“It was going to be great coming back into Group 4 this year under Matty (Ryan).”

The WEG 9s has been a lot of fun for him.

“We’ve come together really well,” he said of the unbeaten Carey’s Freight Lines team,” he said.

“Thrown together and didn’t even have a training run. You couldn’t get a better side either. We’ve won four from four now.”

He joined teammates Brenton Cochrane and Brayden Reid as Bottlemart Man of the Match winners and is thankful for the individual prize.

That his skipper, Brenton Cochrane, has won two of the awards speaks volumes for Cochrane’s natural talent and ability.

His side came from behind three or four times to beat JT Fossey 18-15 and keep its unbeaten record intact.

“I had no doubt we would score at the end,” Brenton Cochrane said of a game where he engineered the final, match-winning try for Nathaneal Slater in the final minute last Saturday.

This Saturday they play Marius Street Family Dental and Shay Brennan Constructions in the final two games of the competition rounds.

The WEG 9s then has a weekend off with the Finals Series played at Scully Park on Saturday, October 31.