And the people of Moree arrived in waves to cheer them on at a huge night under lights at the much-maligned Moree Water Park, which gave birth to Moree Water Ski Club when established earlier this decade.

Club president James von Drehnen said his team had hoped for “around 200 people”.

But a crowd estimated at more than 1000 lined the grassy banks of the man-made ski lakes – constructed to act as evaporation ponds for unwanted water from the many hot spring pools in Moree – to cheer home state- and nationally-graded skiers as they slalomed, flipped and entertained the huge crowd.

More than 200 water-skiers and their families from all corners of Australia arrived in Moree en masse in early April to train for and participate in the 2019 Nautilus Marine Insurance Australian Water-Ski Championships over the Easter long weekend.

Many competed in the NSW Titles the previous week and stayed in Moree to train for the nationals.

Many others arrived days before Easter to train and familiarise themselves with Moree Water Park – one of only three facilities in inland Australia capable of holding such events.

In all, around 500 visitors stayed in Moree for up to two weeks, giving the drought-stricken town a much-needed economic boost.

Moree mayor Katrina Humphries said the evolvement of the Moree Water Park from waste water ponds to a facility capable of hosting national events was a classic “dare to dream” scenario.

“It has been a fabulous night and there are so many people here for some beautiful entertainment. 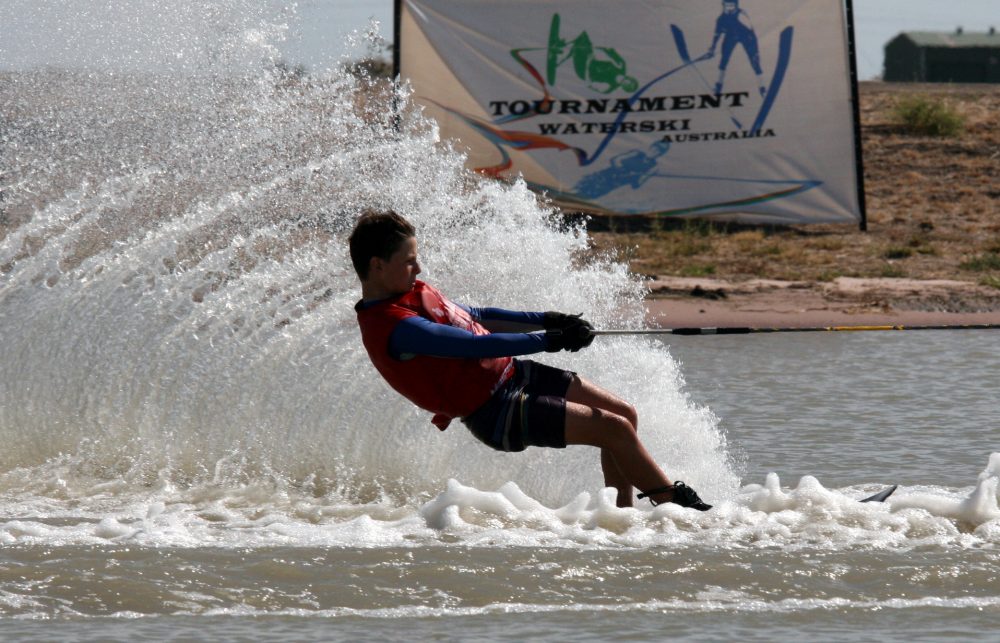 Water-skiers of all ages and from across Australia were in Moree over the Easter long weekend to compete in the 2019 Nautilus Marine Insurance Australian Water-Ski Championships at Moree Water Park (Image: Bill Poulos).

“One skier told me that is was just so good to ski under lights in front of such an enthusiastic crowd – well done, Moree,” she said.

Club committeeman Greg Croft was dumbfounded by the public response as vehicles and buses just kept arriving at the facility, about nine kilometres south of Moree.

“We had no idea this would happen, and I think we’re going to be embarrassed in the catering end of things,” Croft said.

“It just hasn’t stopped and has exceeded all our expectations.”

“This event has been supported really well by the community. The Moree Water Ski Club as well as Moree Council – and the community as a whole – has really gotten behind tournament water-skiing,” Moses said.

“We’ll be bringing many, many events to this facility because they have just done an amazing job.

“There were a lot of naysayers because it is a new site and hadn’t been tested, but the results have been on the water this weekend – and last weekend (at the NSW Titles) – with personal-bests all over the place,” he said.

“Events like this are so good for our community,” she said.

“These visitors stayed in Moree for seven to 10 days and frequented our shops, local businesses and attractions.

“The economic benefits are incredible and the positive promotion of the community to so many people is invaluable – it’s a win-win for Moree Plains.”

The gala event continues today, Easter Monday, and the Moree community is invited to come along and watch nationally-acclaimed water-skiers vie for honours at the Australian championship finals.

Skiing commences at around 8am on both ski lakes and entry is free.

Bubble Muffin Kids’ Cooking Club back on the Plate at Moree