MOREE greyhound trainer Bobby Moore and her husband Gary collected the biggest win of their co-training careers when tiny bitch Petite Harbour raced away with the 302m Ladbrokes Maiden Final at their home track on Monday.

And to make a memorable day at the track even better, Petite Harbour’s hulking big brother Harbour Reign – both are from Gary and Bobby’s former topflight bitch Light Harbour – grabbed third in a race that boasted a $5000 purse.

It is the richest race ever staged at the Moree coursing track.

“This is our biggest win ever – not just at home, but anywhere,” Bobby beamed.

Both dogs were unraced prior to Saturday but now appear to have bright futures ahead of them.

“I’ve only had them for a couple of weeks because they weren’t quite going good enough for Brisbane tracks,” Bobby said.

“They both came down to Moree and trialled and the times weren’t that good so they were left with me”.

Petite Harbour, specked into 8-1 after as much as 10-1 was bet, jumped from the coveted eight-box to sit second for most of the trip. 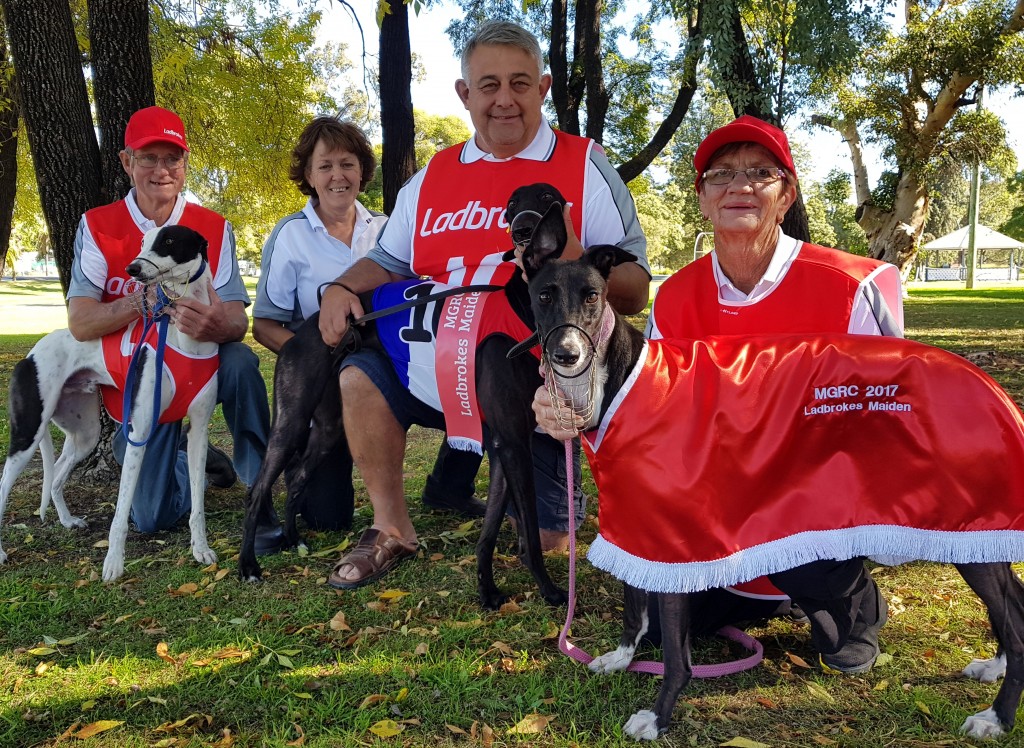 The tiny black-and-white bitch, weighing in at just a tick under 22kg, raced clear in the straight to win by three-parts of a length from Elmagordo (5-2) with littermate Harbour Reign (6-1) nearly two lengths away third.

Ironically, Harbour Reign had won its heat narrowly on Saturday while Petite Harbour had finished second in her qualifier.

“She’s so little, and just stayed outside all the big dogs. She kept out of trouble before opening up halfway up the straight,” Bobby said.

It was a long weekend to remember for Bobby and husband Gary, who wears the Moree Greyhound Racing Club’s president’s badge.

They also own the Paul Wasson-trained Clever Chloe, winner of the 421m Shirley Steel Memorial Stakes on Sunday.

“Paul was going to keep her for a month, and that was 18 months ago,” Bobby laughed.

“It was very emotional at the presentation for the memorial – Paul said some beautiful words – and it’s nice to see a race as important as this go to a Moree trainer,” Garry said.

“Seldom Talks came from Brisbane as well, and like Bobby’s dog he wasn’t quite good enough for up there,” Dallison said.

“He’s had five starts for us now and after running third in his heat he was originally in the second consolation, but because there was a couple of scratchings he ended up in the first consolation.”

Seldom Talks (6-1) hugged the rails midfield before charging clear to win by more than two lengths from My Bracelet (6-1) with 6-4 equal favourite Frosty Vane a length away third.

“He just poked along the rails but when they moved away on the home turn he kicked away,” Dallison said.

“He’s only a young dog and improving with every start.”

Dallison said the three-day carnival had proven a boon for the local dog-racing industry.

“It was a great carnival, and Saturday was a huge day,” he said.

“We had a very big crowd and it was great to see so many members of the Royal Hotel Social Club come along and support the carnival.

“They had a fantastic time and on behalf of the club I thank them for their participation,” he said.

The second 302m Ladbrokes Consolation Maiden was taken out by Darryl Sutton’s Eyeliner Rose while the 551m IPR Contracting Final was won by Sheba’s Doll, trained at Aberdeen by John Lawson.

The 421m Outback Sprint Final was won by My Kinloch, trained at Murrurundi by Alex Verhagen, with John Bradley’s Shakey Randle winning the consolation.

Club president Gary Moore said the carnival embraced 40 races that drew trainers and greyhounds from across NSW and Queensland.

“It was good weekend and the crowd on Saturday was the biggest I’ve ever seen at the Moree greyhounds for a long while – probably ever,” he said.

“Everyone enjoyed themselves and all the visiting trainers have indicated that they are very keen to come back next year.

“It has been a big boost for the club and hopefully we’ll get everyone back next year.

“All the sponsors are happy and ready to go again, and it was great to have such big names like Ladbrokes, IPR Contracting and John Martin Trial Tracks supporting the club, as well as our local Steel and Sabine families sponsoring two very important memorial races,” he said.