FROM booting home Camel Cup winners at the Moree Show three years ago to competing on the national showjumping stage – Moree equestrienne Jess Towns has come a long way in a short space of time.

After competing at various events all over the countryside for many years, seventeen-year-old Jess has now made the final cut to compete in the Pony Club Nationals at Toowoomba later this month.

And to add further to a career milestone, Jess has also been selected as part of a four-person showjumping team to represent Australia against France.

“I was selected in the NSW team for showjumping as well as riding for the Australian team – it’s really exciting,” Jess said.

“This is the first time I’ve had the chance to represent Australia, which is a great opportunity.” 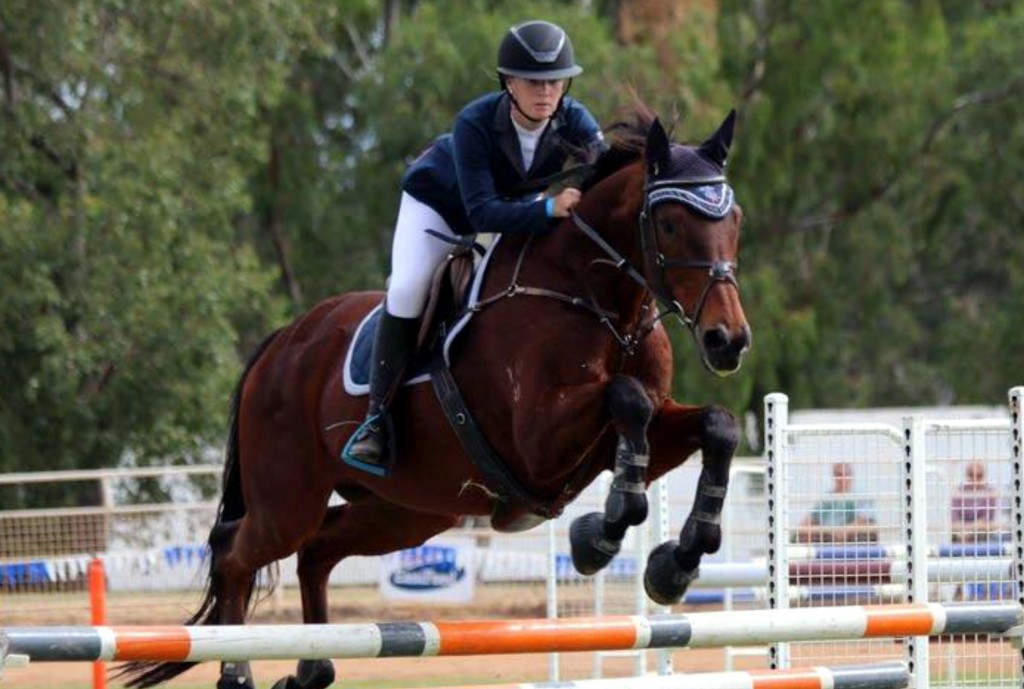 Jess Towns on board Pine Park Vertical Limit – better-known as Buzz. The pair have been selected to be part of the NSW showjumping team at the Pony Club Nationals at Toowoomba later this month (Image Supplied).

“Only six people from each state get selected for each discipline, and there are about five disciplines,” Jess said.

Jess will ride Pine Park Vertical Limit – better-known as Buzz around the Towns’ camp – in the senior showjumping team.

“Buzz belongs to a girl called Sarah Hamparsum from Gunnedah, whom I’m at school with at New England Girls’ School (NEGS),” Jess said.

“Sarah went overseas this year and wanted someone to lease Buzz while she was away. She was so happy that I was able to take him on.”

Jess, named overall champion at the NSW State Pony Club Championships at Tamworth in July when riding Buzz, has also been selected to compete in the formal gymkhana, and will partner one-time racehorse Slaybaugh.

Slaybaugh, now 13 years of age, was just a racehorse making up the numbers a few years ago.

Trained by Jess’s uncle, Peter Sinclair, Slaybaugh won just two from 19 before retirement but has blossomed since finding a new career path on the pony club circuit.

“Jess has done an incredible job educating Slaybaugh. She has done it all on her own, and the old horse now does all disciplines of pony club,” Sinclair said.

Jess is a natural horsewoman, who two years’ ago competed at the nationals at Murray Bridge in South Australia.

It was another signature performance – winning two out of four jumps on Snip, a horse that had faithfully carried her through the ranks for many years.

However, Jess’s mum Jacque said the special bond between a girl and her horse came to a sad end earlier this year.

“Sadly, we had to put Jess’s beloved Snip down a couple of months ago,” Jacque said.

“Snip was the horse that Jess had been competing on successfully to obtain a place in the Nationals’ team but unfortunately we had to retire Snip at Christmas then put him to sleep recently.

“Luckily, Jess had Buzz, the horse we leased, to fill the huge gap left by Snip,” she said.

Now Buzz and Jess are preparing for their moment in the sun on the national pony clubbing stage.

“To be selected as a rider in the NSW nationals’ team Jess has had to compete over the past two years successfully,” Jacque said.

“It is a big feat to be selected, let alone on two of her horses.”

Jess also competed at the North Star showjumping championships last month as an important lead-up to the Toowoomba nationals.

“North Star was a great chance to give the horses some jumping as we head toward the nationals,” Jacque said.

Jess was born to ride – her bloodlines on the dam side ooze all things equine – however Jacque says her daughter’s success is not just family borne.

“A big part of Jess doing so well under the pony club banner is because of Julie Morgan, from Boomi,” Jacque said.

“Julie is our Zone 8 chief instructor as well as vice-president of the NSW Pony Club Association and travels everywhere with the Zone 8 kids when they compete.

“Julie is also the showjumping team manager for the nationals and she puts in a heap of work helping the kids from our district to achieve their goals,” Jacque said.

“There are a few from our zone going to the nationals as well, which is really good – we’ve never had this many people go before,” Jess said.

“It’s great to see the zone stepping up a bit, with more quality riders coming through.”

Earlier this year, Jess travelled to America for a two-week equestrian educational study tour and is making tentative plans to again take flight next year.

“I’m hoping to go overseas to ride and work in Germany or America – that’s the next thing I plan to do,” she said.

“It’s not fully organised yet but hopefully it will happen.”

Jess has come a long way since steering fleet-footed ungulate Not Another Playa to victory in the North-West Plumbing Moree Camel Cup at the 130th annual Moree Show three years ago.

“That was a lot of fun” Jess recalled.

“When we jumped I just yelled and roared at him and he raced clear – he bolted in,” she smiled.